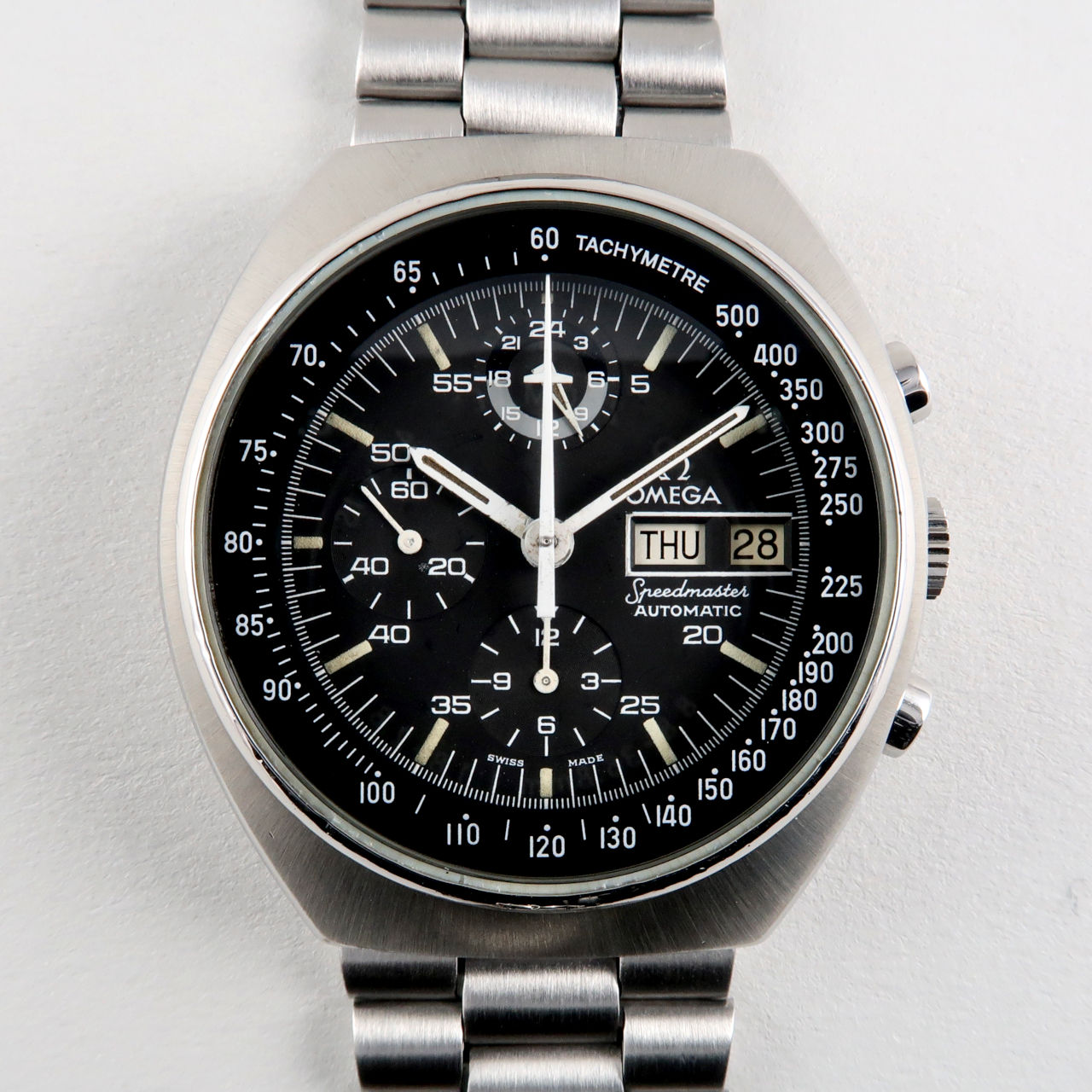 Wishing you a Happy New Year, our first update of 2021 opens with an Omega Speedmaster Mark IV.5, a model that the watchmaker initially released in 1974. Bearing similarities to its predecessors, the Mark III (launched 1971) and Mark IV (launched 1973), the Mark IV.5 introduced an additional aperture to indicate the days of the week. The dial’s design was also adjusted, adding an extra subsidiary dial which allowed the separation of the 24-hour indicator from the constant seconds indication – a feature that had previously been combined on one subsidiary dial. This additional subsidiary dial was placed at the 12 o’clock position and, consequently, the Omega signature and model legend were moved to the right side of the dial. The chronograph’s minute recording hand is fitted to the dial’s centre and features a winged tip to clearly delineate it from the other central hands. A large and imposing model, the steel case has a width of 42mm with combinations of satin and polished finishes. 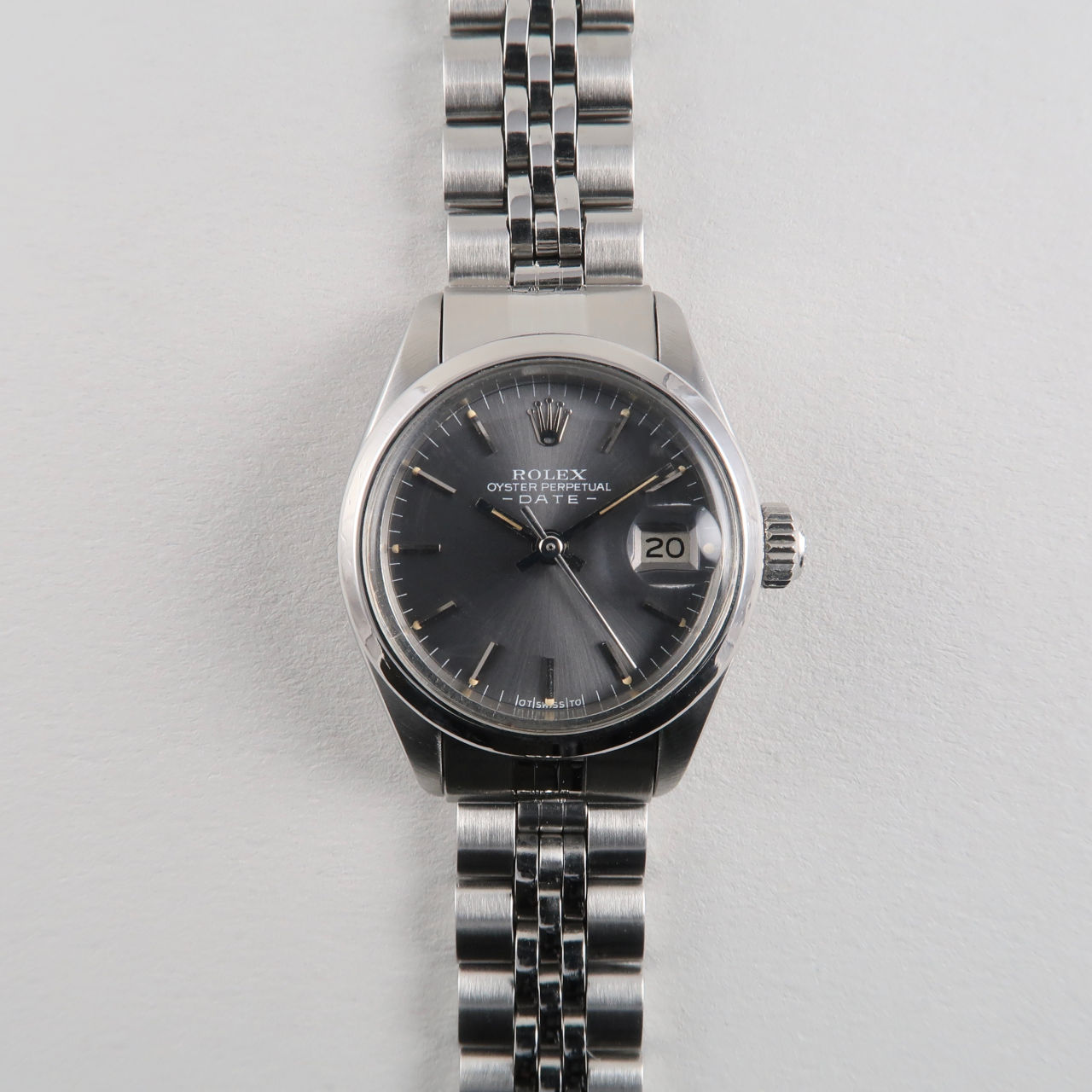 This lady’s Rolex model has a charismatic grey ‘Sigma’ dial with contrasting white printed legend and tracking. So-called ‘sigma’ dials were introduced in the 1970s and are named after the use of the Greek letter which appears at the base of the dial to either end of the ‘Swiss’ graphic. These ‘sigmas’ indicate that the applied numerals to the dial are made from gold. Since numerals/indexes on watch dials are often either punched out from the dial’s surface and/or applied with a plated finish, the ‘sigma’ sign was a useful way to indicate when gold was used, thereby highlighting the quality of materials used. Gold indexes were not used as standard by Rolex and therefore ‘Sigma’ dials are especially prized by collectors. 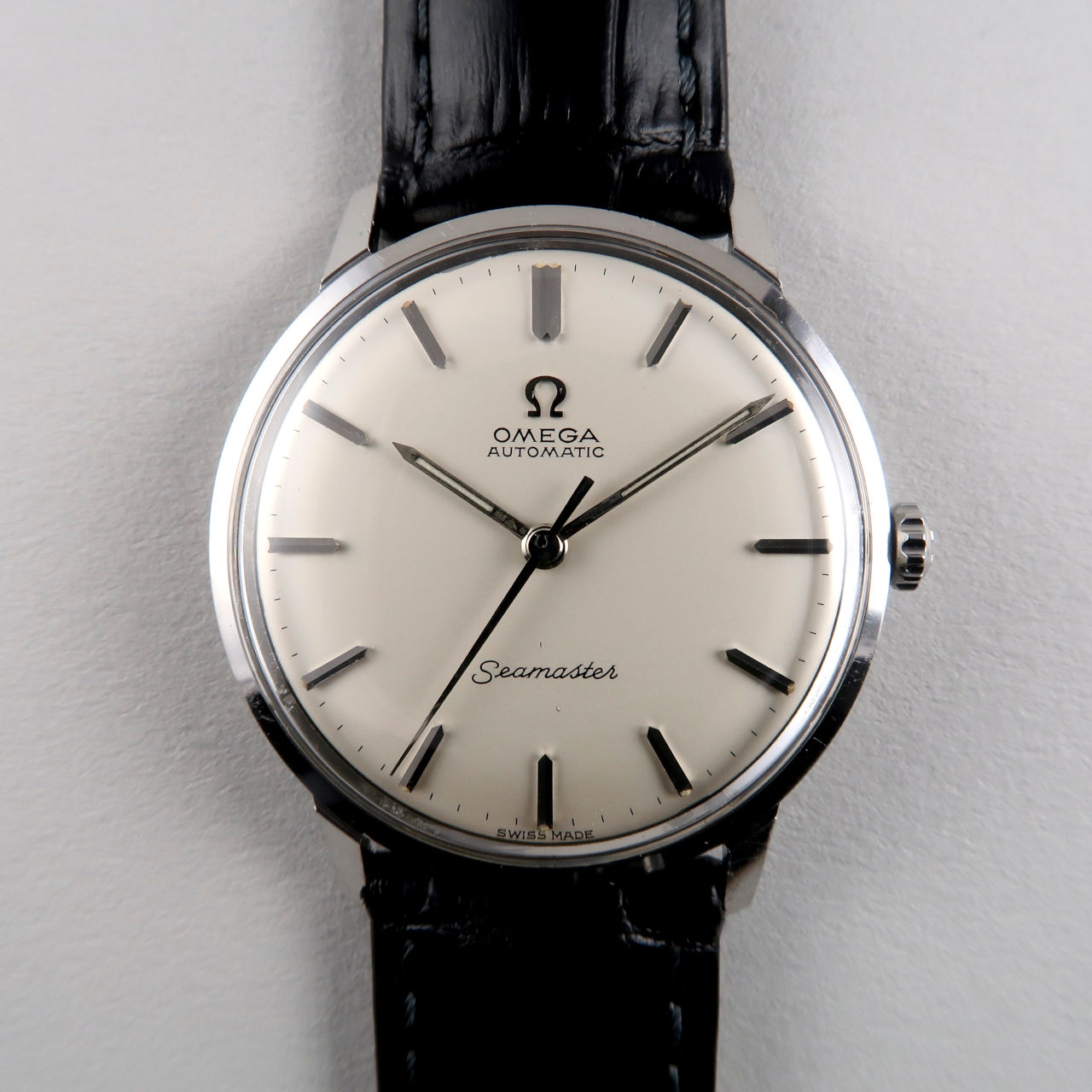 Omega first introduced Ref.165.001 in 1962. This version of the model has a silvered dial which retains a good lustre to the surface and is set with applied faceted baton indexes. The stainless steel case retains good definition and there are some light scuffs and scratches from wear. Automatically wound, the watch is powered by Omega’s excellent calibre 552 movement with 24 jewels and precision regulation. 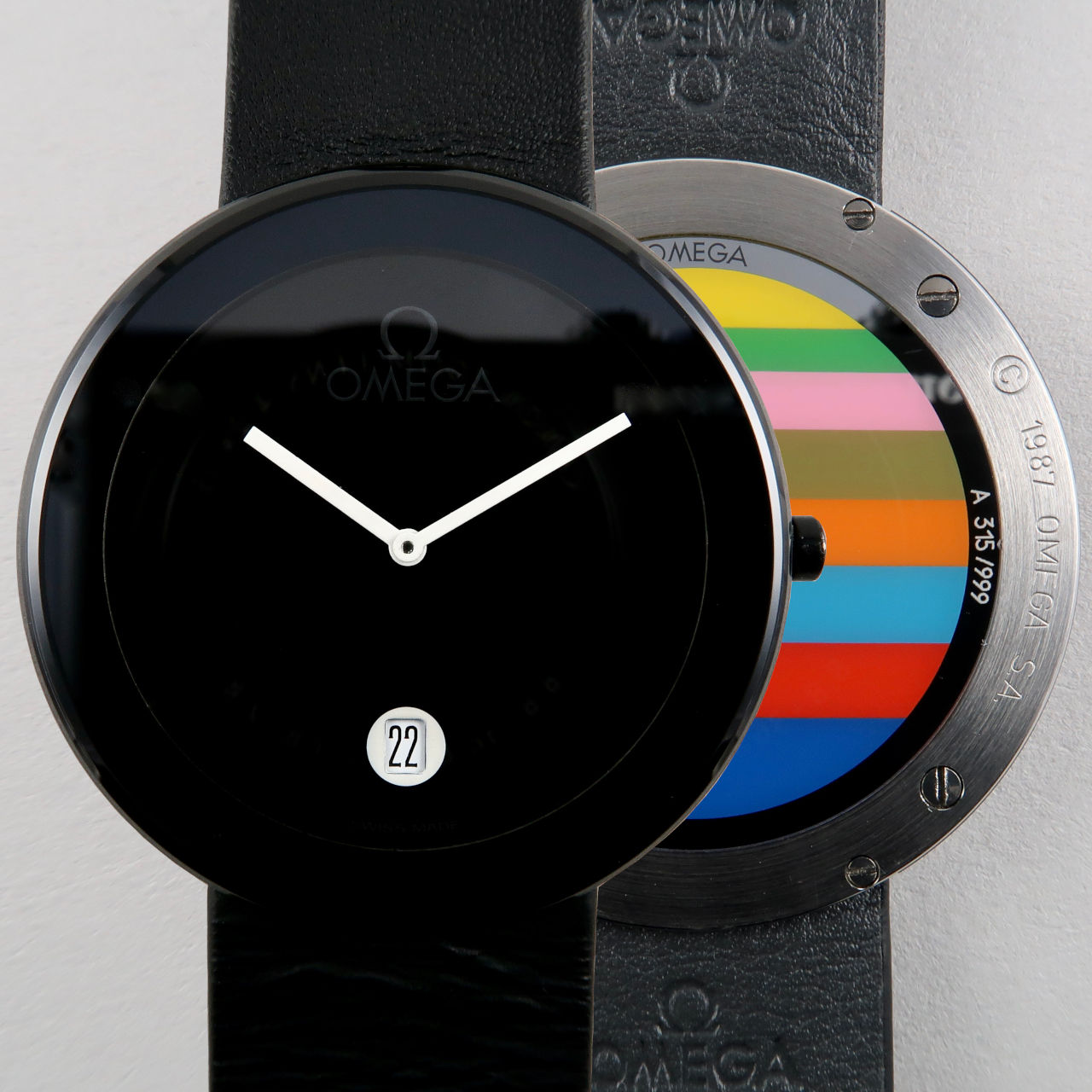 Now for something a little different…we have just added two rather special Art watches by Omega, the first of which is a 40mm diameter wristwatch with a colourful case back medallion designed by the artist Kenneth Noland.

Omega announced their new “Art Collection” watches in October 1986 with the first models officially released in 1987. The project was managed by Ernest Thomke the first CEO of the SME (Société de Microélectronique et d’Horlogerie), later re-named the Swatch Group, of which Omega was a part. Prior to this, in 1980, Thomke had been CEO of ETA and had led the project to develop the Swatch watch. The watch cases for Omega’s “Art Collection” were designed by Hans Zaugg using a new scratch-resistant ceramic alloy. Gerhard Saner, head of Saner Metallisation AG, Studen, designed the artists’ medallion for the case backs. Omega commissioned a variety of artists to produce designs for the medallions, these included: Kenneth Noland, Valerio Adami, Max Bill, Richard Paul Lohse, Paul Talman, Camille Graeser, Fritz Glarner, Al Held, Arnaldo Pomodoro and Emilio Tadini.

The second example is a mid-sized model with a 32mm diameter case which features a case back medallion designed by Max Bill. The monochromatic colouring of the upper cases of both these watches contrast dramatically with the colourful artists’ medallions to their backs. Each watch is fitted with an original, special edition Omega strap with blackened metal pin buckle. The watches have quartz movements and the dates can be manually adjusted when required via a quick-set system. 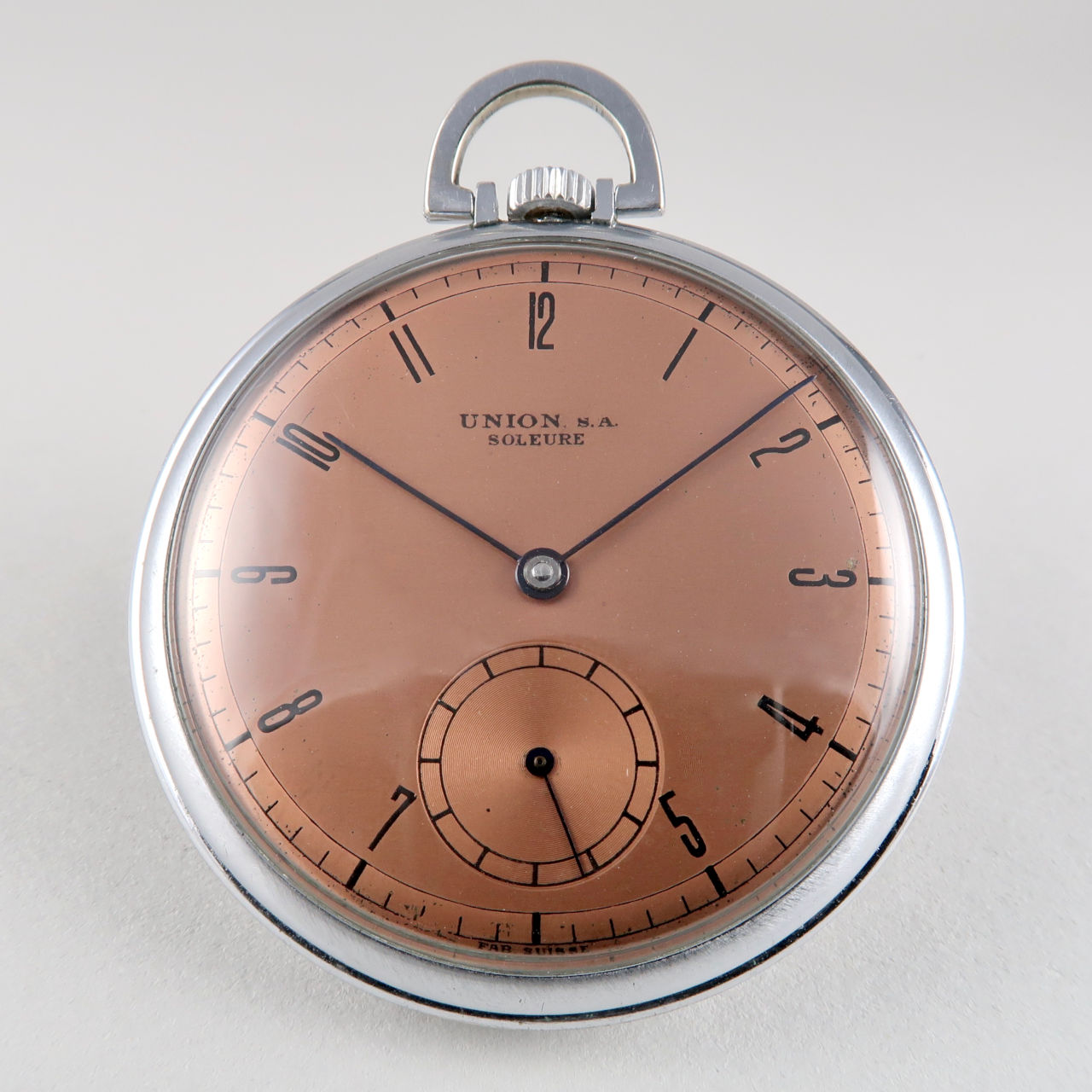 Heading back in time now with this Union pocket watch from c. 1940. The watch has a most attractive copper coloured dial with distinctive and slim, elongated Arabic numerals. The dial has a two-tone finish with a subtle contrast between the sheen of the main dial body and the outer minute track. Union S.A., originally founded in 1895, was a watchmaking firm based at Solothurn (Soleure). Solothurn lies just to the south of the Weissenstein mountain between Bern and Basel in north-western Switzerland. Manually wound via a good quality Geneva striped movement, the watch is housed in a nickel-chrome case. 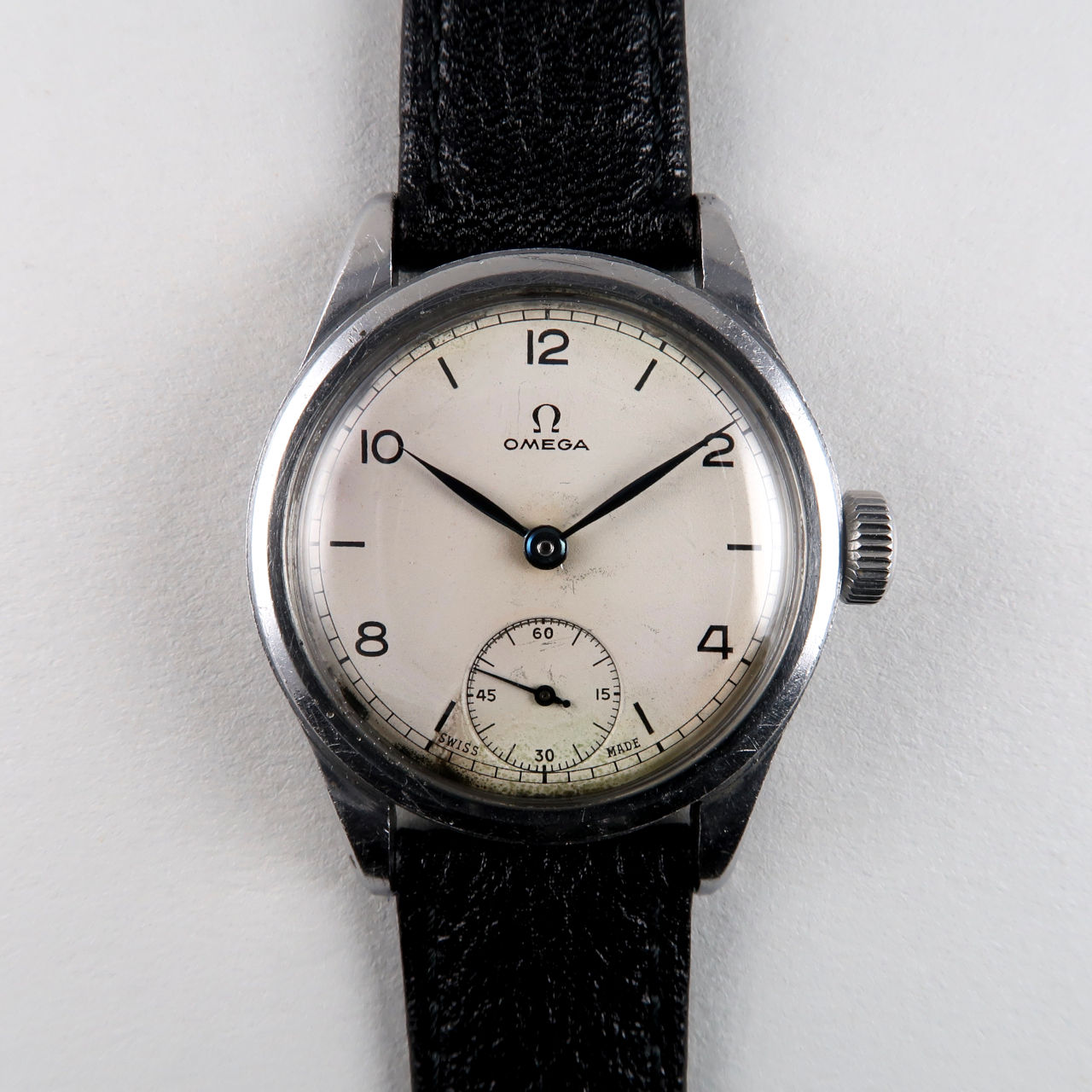 This week’s final watch is a reference 2165, a mid-sized model that was introduced by Omega in 1943. The watch has a two-piece, 30.5mm case with solid upper body, moulded bezel and a screw-down back. The inside case back of this watch is stamped beneath the reference number with the coding CS(I) denoting that the watch was supplied to the British Civil Service in India. There are some scuffs and age related markings to the dial as well as light scuffs and scratches to the steel casing.