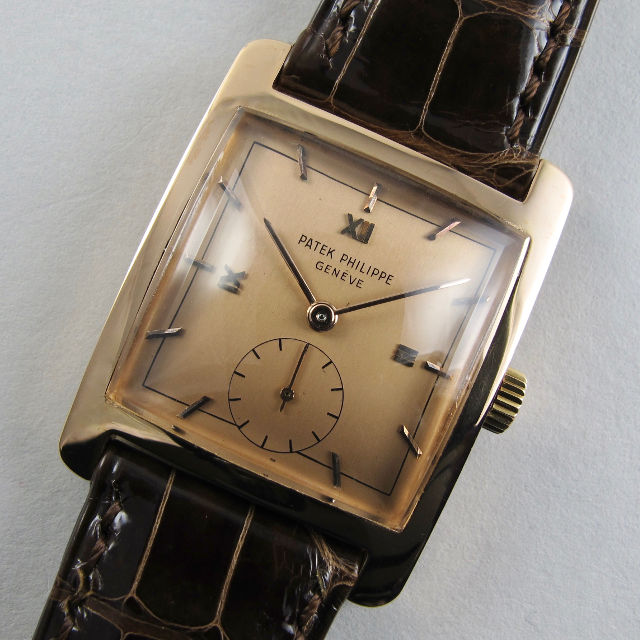 This week’s update opens with a fabulous 18ct pink gold square Patek Philippe wristwatch with pink dial. Patek Philippe first introduced reference 2433 in 1948 and the present example was made in 1952. The scarcity of examples would suggest that it is likely that production did not continue much beyond the date of the present watch. The superb pink dial is in excellent original condition with a wonderful lustre that perfectly compliments the rich tone of the pink gold case, lending the watch a striking monochrome appearance. 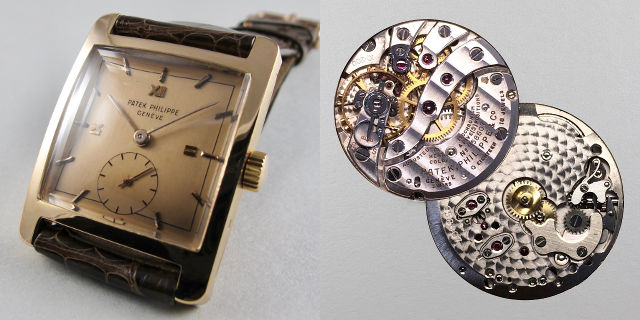 appearance. To match the dial, the hands and applied numerals are all made from pink gold and the enamel printed text and tracks are bold and clear. The 18ct pink gold case remains in great condition with crisp definition to its angles and edges – the Swiss hallmarking to the right hand case side is remarkably sharp, further demonstrating the case’s excellent state of preservation. Manually wound, the movement is Patek’s calibre 10”’-200 which is beautifully finished with damascened stripes to the backplate and decoratively machined pearling to the top-plate. 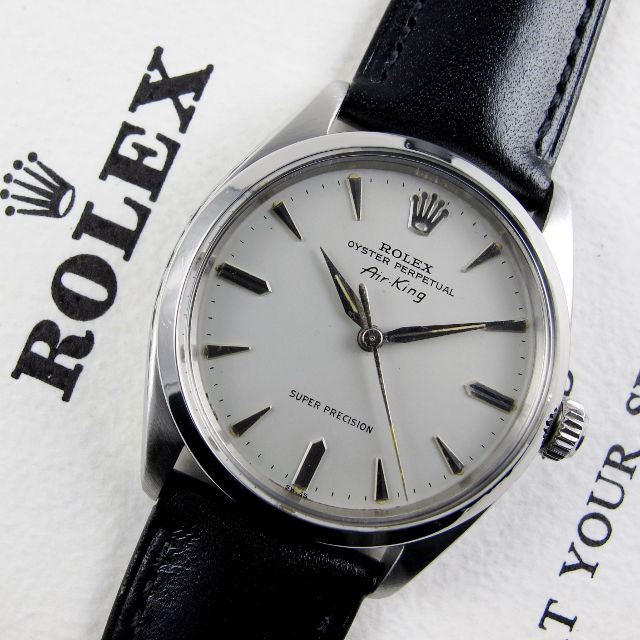 Next is an early example of the Rolex Oyster Perpetual Air-King Ref. 5500 which is complete with its original boxes and paperwork. Made in 1963, this watch has a silk matte finished silvered dial which is distinctly different in appearance to the satin, silvered dials of later versions of the model. In excellent original condition, the dial has a numeral configuration rarely seen on the Air-King: twin indexes at the quarters with multi-faceted surfaces and pointed tips, interspersed with multi-faceted triangular indexes. Each of the luminescent dots above the numerals have a lovely rich and warm tone. The original Alpha-shaped hands have some very light oxidation and the chroming to the centre seconds hand shows some of the brass tone beneath. 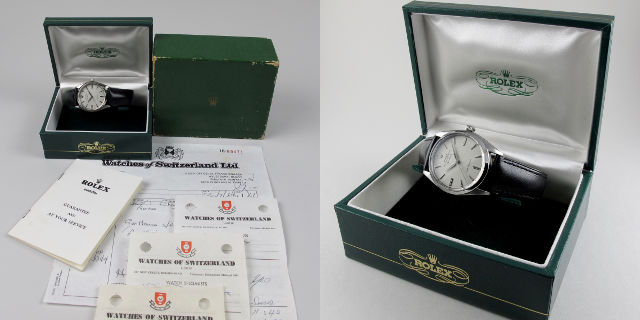 Accompanying the watch is the original Rolex guarantee booklet showing that this watch was originally sold by Watches of Switzerland in Birmingham in September 1964. This watch also retains 4 service receipts from Watches of Switzerland dating from the 1960s until the 1980s – the service information from the 1960s and 1970s is also filled out in the service schedule to the back of the Rolex guarantee booklet. The green Rolex presentation case retains its original green velvet stand and also its original outer Rolex branded card box. 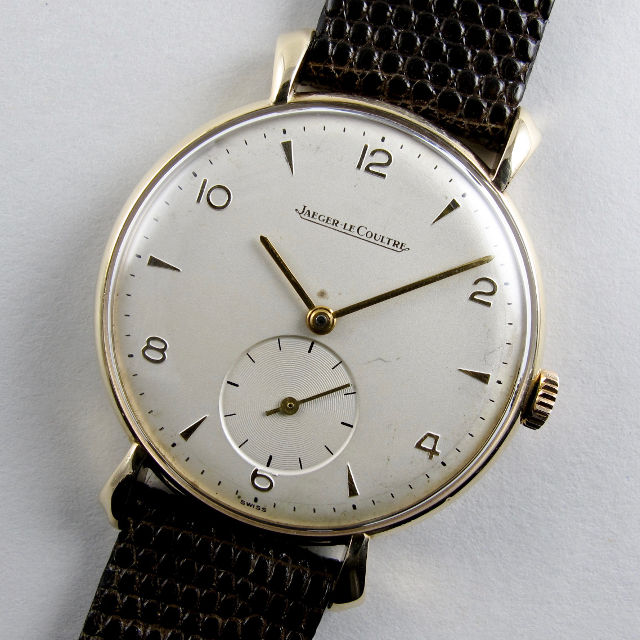 Above is a handsome 9ct yellow gold Jaeger-LeCoultre wristwatch which is hallmarked for 1958. The case is relatively large for the period of production, measuring 35.5mm in diameter and featuring very attractive flared lugs. The slim bezel and large surface area provided for the dial means that this watch looks and wears even larger than the case diameter suggests. With a classic, vintage Jaeger-LeCoultre design, the silvered dial has combination Arabic and triangular numerals and an engine-turned subsidiary seconds dial. There are some light scuffs and oxidation spots to the dial’s surface. 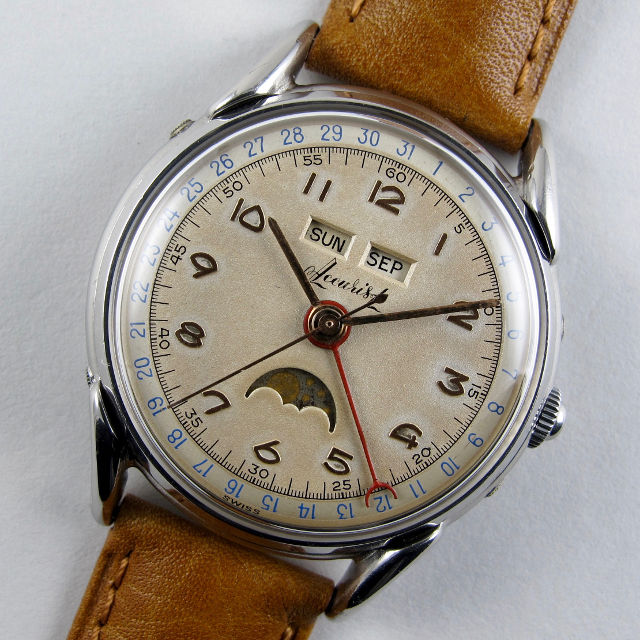 Pictured here is a very attractive stainless steel triple calendar wristwatch with moon-phases made in the 1950s by Accurist. This model has a stunning two-tone dial which is in excellent original condition with a wonderfully warm and even patina. The date ring is calibrated in blue against a high sheen, silvered surface which contrasts brilliantly with the main dial body. To achieve the secondary tone, the date ring is fractionally recessed into the dial plate and is therefore cleanly separated from the rest of the dial’s surface which is matte finished to its extreme edge in exactly the same fashion as the dial’s centre. Cased in stainless steel, the upper body has flared, horn-shaped lugs and a chamfered bezel. The case retains very good definition with light scuffs and scratches. Manually wound, the movement is ETA’s 17 jewel calibre 1100. This is one of the few calendar movements of the period to have separate pushers for the adjustment of all indications – whilst the calendar will advance each day around midnight, four recessed buttons to the case sides independently allow for the manual adjustment of the day, month, date and moon-phases. 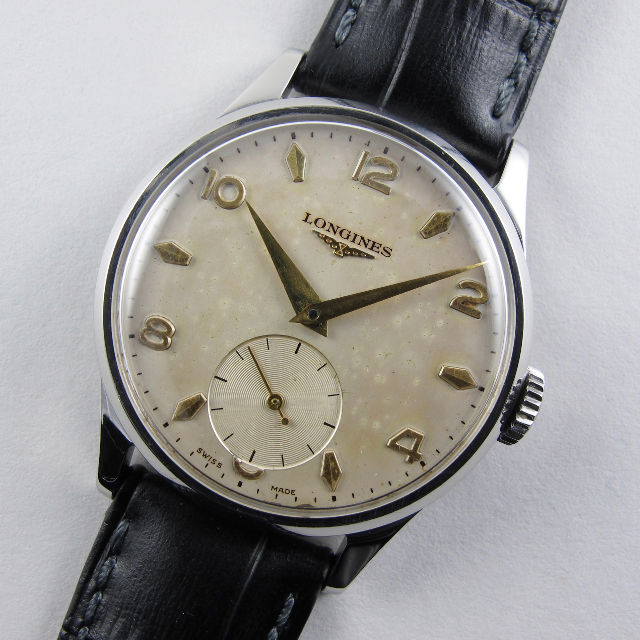 Above is a classic vintage Longines wristwatch cased in stainless steel and made in c. 1955. The dial has a wonderful patina which has subtle golden and pinkish hues and light and even oxidation spots. The stainless steel case was made for Longines by the Dennison case company and is a model 13322 – interestingly this is the same case design that Dennison supplied to Omega for use in their Ref. 720. Manually wound, the movement is Longines’ calibre 12.68Z – one of the watchmaker’s most successful movements which was first launched in 1929. 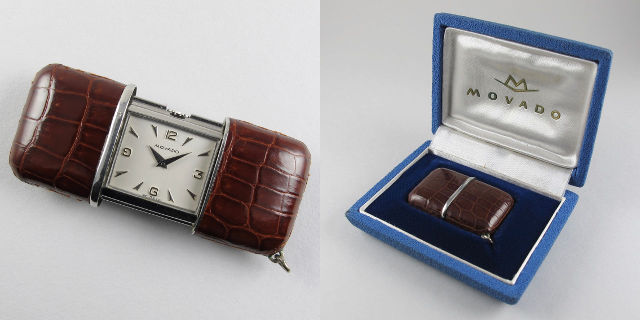 Next is a Movado Ermeto ‘Baby’ steel travelling watch which dates to circa 1954. The smallest of Movado’s purse watch range, the Ermeto ‘Baby’ was originally made as a model to integrate into ladies’ handbags but was later added to the general Ermeto range. This example is in outstanding condition and appears to be almost unused. The original fitted presentation case is also in excellent original condition. This watch incorporates Movado’s calibre 575 – the movement was made in series for the Ermeto Baby for a relatively short period from 1947 until 1954; the present watch dates towards the end of this production run. The Ermeto was designed to be used with or without a chain and can simply be placed in a pocket or bag. When the covers are opened, a hinged stand to the back can be operated, thereby allowing the watch to be placed on a desk or bedside table, creating the perfect travelling timepiece. This model incorporates Movado’s ‘automatic’ case winding system that was patented in 1928. 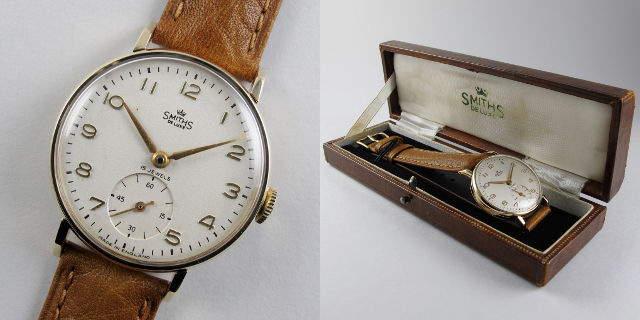 And a momentary departure from the Swiss…above is an English made gold Smiths watch from their De Luxe range, made in 1958. Formed in the early 20th century, the English firm of S. Smith & Sons initially retailed both Swiss and English watches and clocks. During the Second World War, the company manufactured their own watches for the military but, from the mid 1940s, Smiths began to produce higher grade wristwatches which led to a transformation of their in-house production. In 1953, Smiths performed a marketing coup by supplying Edmund Hillary with a watch for his ascent of Everest. Seizing on the advertising opportunities, Smiths launched a campaign picturing a Smiths de Luxe watch on top of Everest with a quote from Hillary beneath stating: “I carried your watch to the summit. It worked perfectly.” The watch that Hillary wore bore the same Smiths calibre as found in the present watch, the calibre 12.15. Smiths designed the 12.15 calibre with a traditionally English inspired finish with gilded, frosted plates and the movements quickly gained a reputation for their reliability and quality. A very handsome example of the De Luxe model, this Smiths watch is complete with its original silk and velvet lined presentation case. 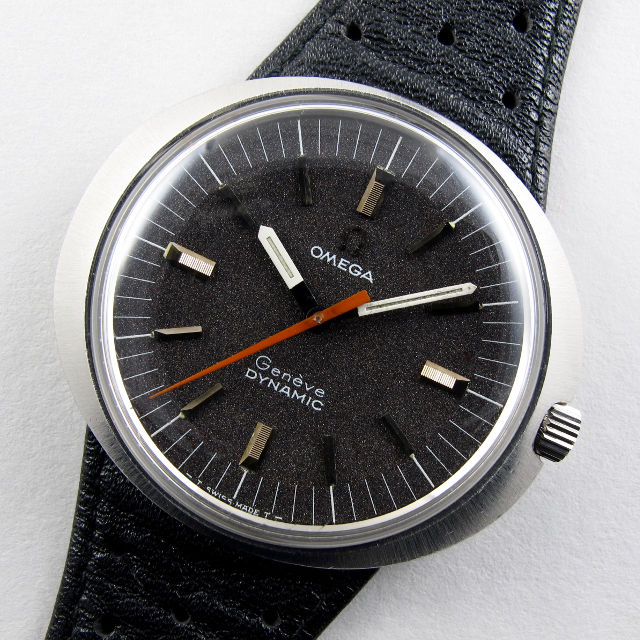 The Omega Genève Dynamic model shown here dates to c. 1969. The ‘star dust’ black dial has a finely speckled surface which catches the light and looks great against the bright, polished faceted indexes. Elliptically shaped, the steel case is in very good original condition and the watch is fitted with an Omega Dynamic leather strap and steel Omega buckle. 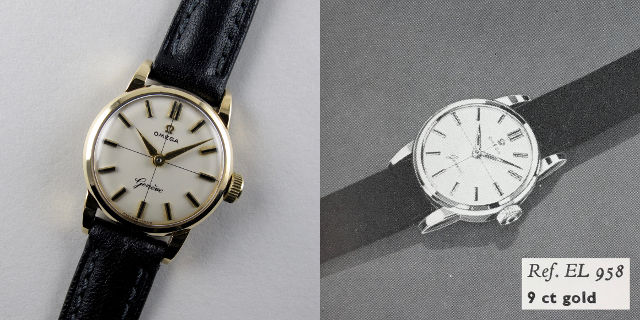 Rounding off this week’s update is an Omega Ref. 958 lady’s wristwatch made in 9ct gold. This watch has a stylish dial with crosshair to the centre and script font ‘Genève’ signature. Listed in Omega’s catalogues of the early 1960s with a retail price of £33, a copy of its entry is shown above right. A manually wound watch, this model is powered by Omega’s 17 jewel, calibre 344.

To automatically receive these updates via email, please select the “Join our Mailing List” tab at the bottom of any of our web pages.