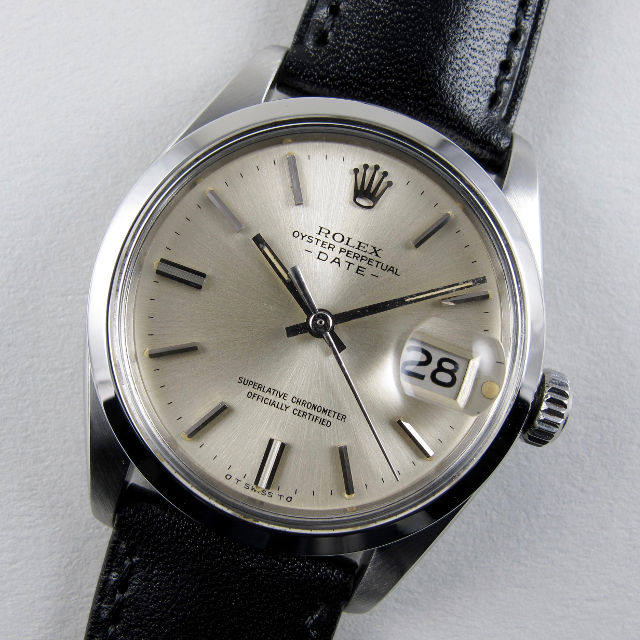 Opening this week’s newsletter is a smart Rolex Oyster Perpetual Date Ref. 1500 which dates to 1972. This wristwatch has a smart silvered ‘sigma’ dial that is in excellent condition. So-called ‘sigma’ dials were introduced in the 1970s and are named after the use of the Greek letter ‘sigma’ which appears at the base of the dial to either end of the ‘Swiss’ graphic. These ‘sigmas’ indicate that the applied numerals to the dial are made from gold. Since numerals/indexes on watch dials are often either punched out from the dial’s surface or applied but with a plated finish, the ‘sigma’ sign was a useful way to indicate when gold was used and thereby highlight the quality of materials used. Automatically wound, this model is powered by Rolex’s calibre 1570 with hack feature, when the crown is pulled out to set the time, the seconds hand is stopped, thereby allowing easy synchronisation to a time signal. 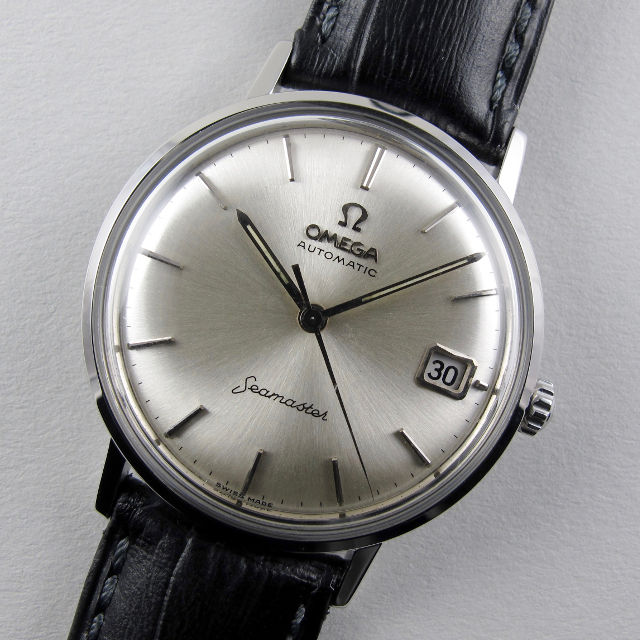 Next is an Omega Seamster Ref. 14770 which was manufactured in c. 1961 – just a year after Omega first released the model. This version has a finely satin finished dial with applied faceted baton indexes and a framed aperture for date. The watch retains its original Omega crown and signed crystal. The outside case back has an especially crisp example of the Omega Seamaster medallion and the watch retains its original Omega pin buckle. 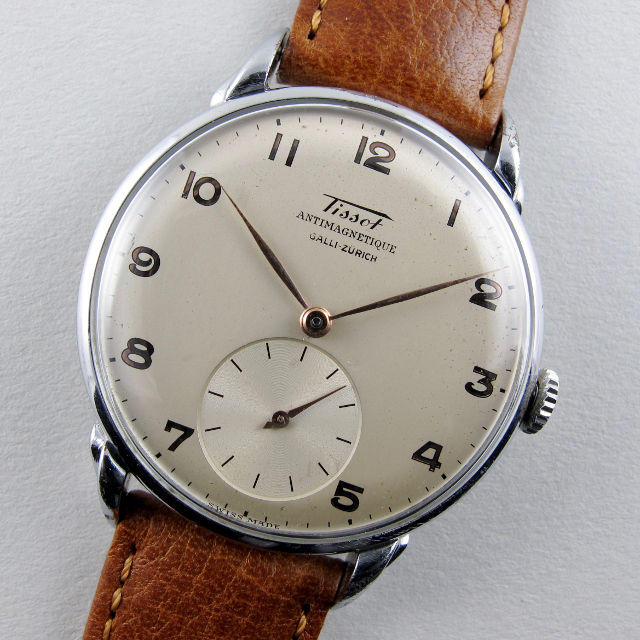 Above is a rare and most attractive Tissot Ref. 6453 from 1946 which has a relatively large case diameter for the period of 35.5mm. The watch has a lovely silvered dial with pink metallic foil Arabic numerals and matching pink gilded hands. The dial features the name of the original retailer beneath the Tissot brand which shows that this watch was originally sold at Galli in Zurich. Galli has been retailing watches in Zurich for more than 125 years and remains an official retailer of Tissot timepieces to this day. The dial is in good original condition with a rich lustre, only minor oxidation and two or three small scratches to the centre. 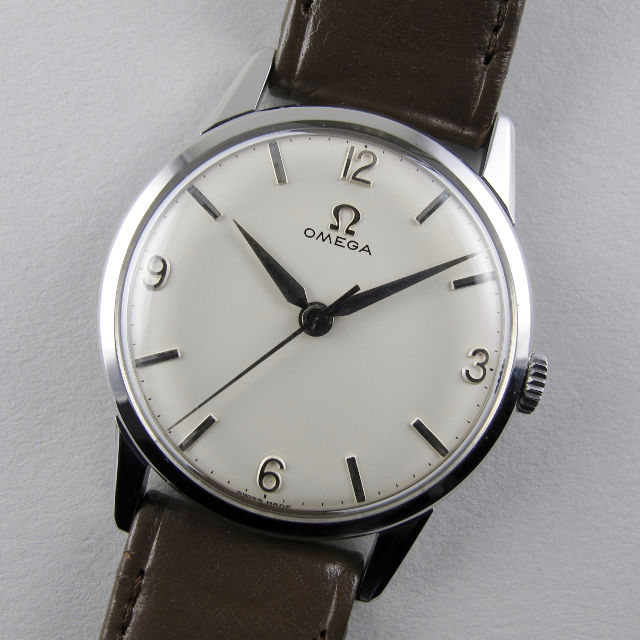 Shown next is a stylish Omega Ref. 14714 from 1961. This wristwatch has a silvered dial that is in excellent original condition with raised Arabic and baton indexes. The stainless steel case has a chamfered bezel and faceted lugs and is fitted with a grey, vintage Omega leather strap and steel Omega pin buckle. The calibre 285 Omega movement is from the watchmaker’s excellent 30 series. 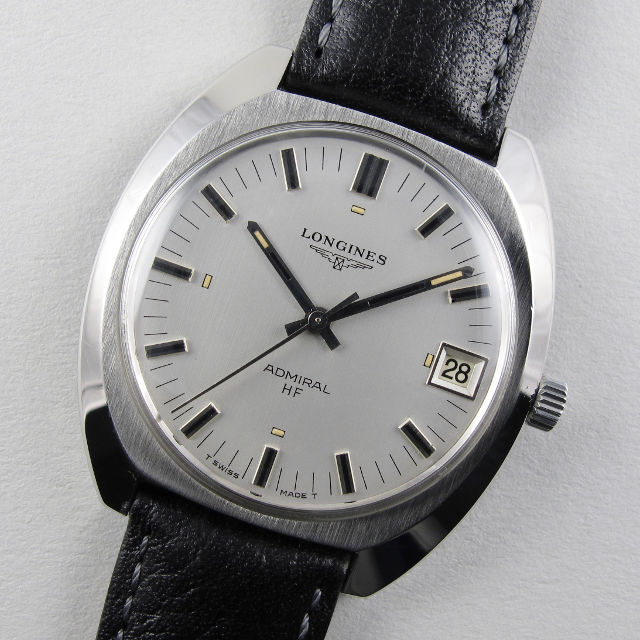 The Longines Admiral Ref. 2304 shown above dates to 1973 and incorporates the Longines calibre 6952 with one of the fanciest hack features of any vintage movement. When the crown is pulled out to its second setting, the second hand continues to the top of the hour and then stops, allowing easy synchronisation to a time signal. As soon as the crown is pushed back to the case, the second hand restarts. The movement also has provision for quick date change, allowing the date to be moved backwards or forwards when the crown is pulled out to its first setting. A great looking model, this reference was also produced in a limited edition in 1972 to commemorate the Munich Olympics. 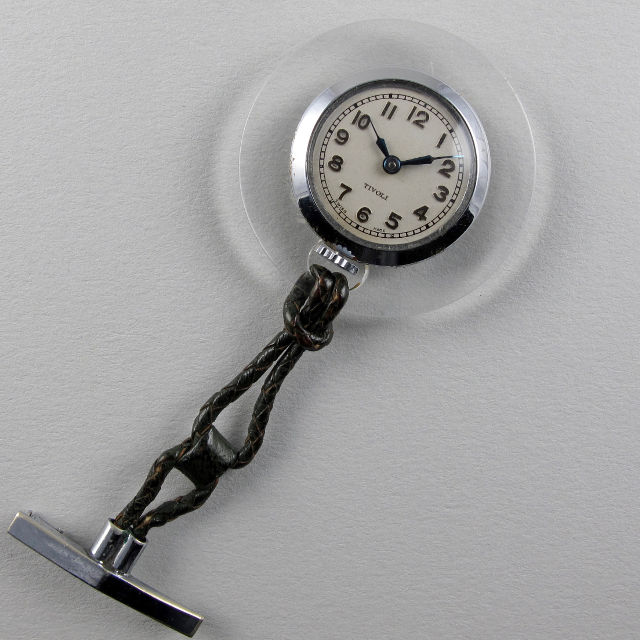 Pictured here is a very unusual acrylic and chrome mounted watch made in c. 1940 by Tivoli, a sub brand of the Pierce Watch Co. The watch retains its original leather plaited fob with chromed metal brooch and is mounted within a transparent acrylic disc. The chromed bezels are glazed both to the front and back of the watch showing the dial to the front and movement to the back. The Pierce Watch Co. Founded in 1883, Pierce had offices and factories in Bienne, Geneva and Moutier. This watch incorporates Pierce’s own calibre 861 movement. 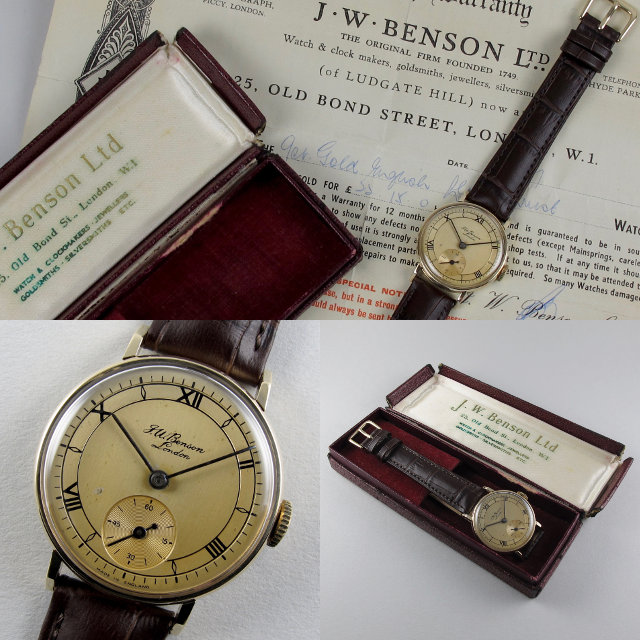 Pictured here is a 9ct yellow gold wristwatch which is hallmarked for 1955. Although branded by J. W. Benson, this watch was in fact made for Benson by Smiths. This model, with the same dial configuration and case design was listed in the 1954 Smiths catalogue as a Ref. A.503. The watch is powered by the calibre 400 which was manufactured in England by Smiths at their Cheltenham factory. The 9ct yellow gold case was also made in England by the specialist case makers Dennison and although this is also signed by J. W. Benson, it is again identical to that used by Smiths for their ‘in-house’ Ref. A503. 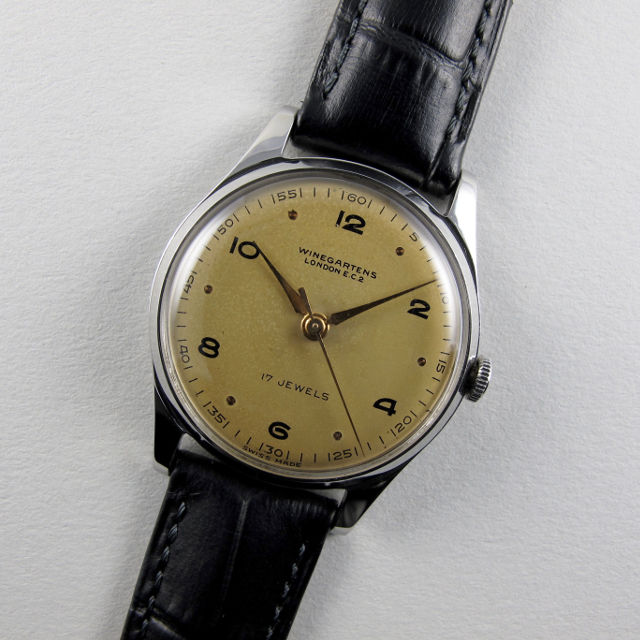 Above is another English branded watch, this time by Winegartens, a retailer based in Bishopsgate, London. Made in c. 1950, the watch is in good original condition with a champagne coloured dial that has combination black Arabic and recessed pink gilded numerals. Winegartens were perhaps best known for the railway regulator watches that they produced from the early part of the 20th century. For this watch, Winegartens used a good quality 17 jewel calibre by the specialist Swiss movement manufacturers, A. Schild. The steel case was supplied to Winegartens by the English case maker, Dennison and is their case model 12325. 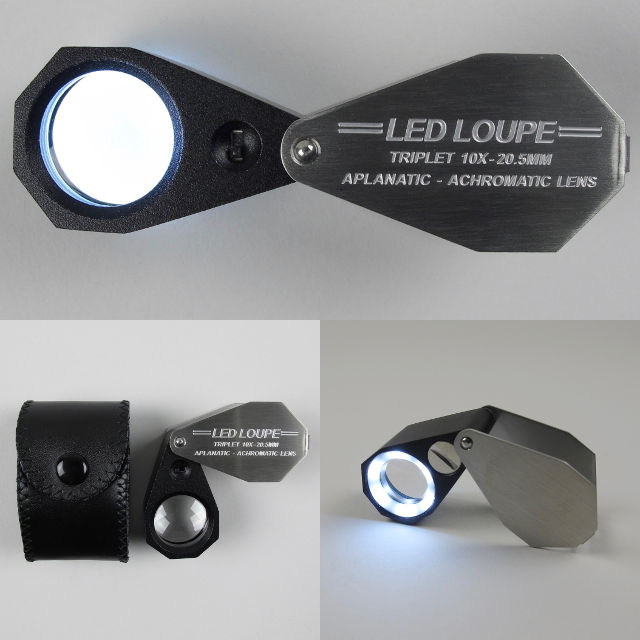 Our excellent LED loupes are now back in stock – these loupes are fantastic for looking at either watches or jewels in detail. The LED light is extremely bright and highlights the entire viewing area, allowing very detailed examination of objects.  The broad lens is 20.5mm in width, has 10x magnification and is both aplanatic (corrected for spherical aberrations) and achromatic (corrected for colour distortions). Robustly made, the lens casement is made from blackened metal and the outer casement from satin finished steel. There is a switch for turning the light on and off and the battery compartment is sealed with a screw-down metal cap. Each loupe is accompanied by a fitted leather pouch.

To automatically receive these updates via email, please select the ‘Join our Mailing List’ tab at the bottom of any of our web pages.