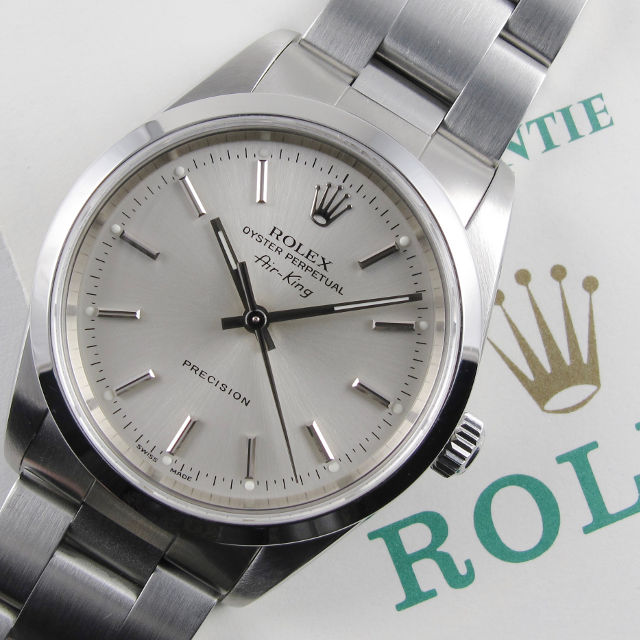 Kicking things off this week is a crisp Rolex Oyster Perpetual Air-King Ref. 14000M which was originally sold in 2002 and is complete with all of its original accessories. Introduced by Rolex in 2001, the Ref. 14000M features a sapphire crystal and what was at the time, Rolex’s new calibre 3130 automatic movement with 31 jewels. The ‘Air-King‘ model name was first introduced by Rolex in the 1940s, but it was not until 1957 when Rolex launched the Ref. 5500 Air-King that a ‘template’ for the Air-King’s design was set, this template determined the model’s styling right up until its temporary withdrawal in 2014. In 2016, the Air-King was re-launched with a dramatically different look but retaining the iconic ‘Air-King‘ script signature. 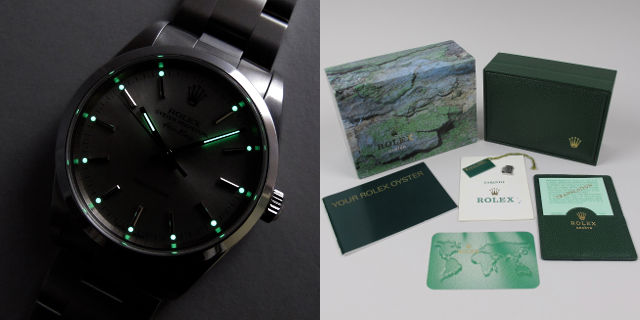 The sapphire crystal is extremely resistant to scratches and features a tiny etched Rolex emblem just above the base of the dial. Included amongst the watch’s accessories are the original punch numbered certificate, boxes, booklets and numbered swing tag. The dial has Super-Luminova luminescent dots above the numerals and to the hands which are bright and clear in darkness. As part of this Rolex watch’s service it has been pressure tested for water-resistance for depths up to 100 metres. 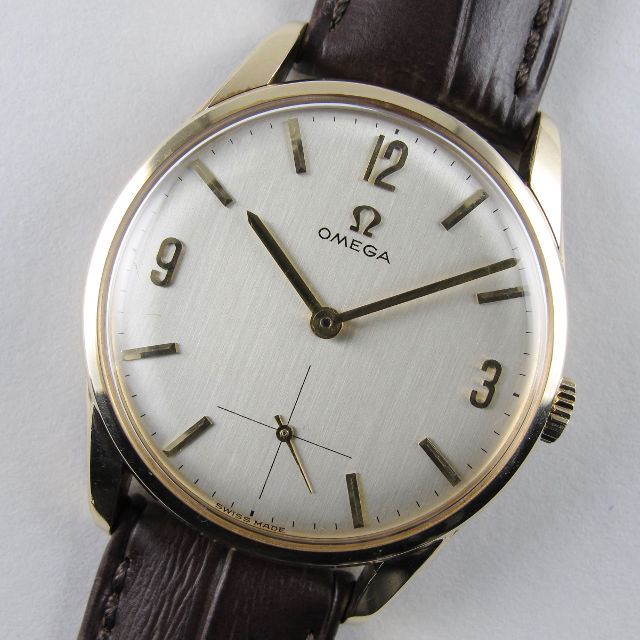 Next is a very handsome Omega Ref. 121.5400 in 9ct yellow gold which is hallmarked for 1964. Reference 121.5400 appears to have been introduced around 1963-1964 to replace the previous model Ref. 923 which was still advertised in the UK market’s Omega catalogue of September 1962. Like the 923, the 121.5400 has a substantial gold case and handsomely down-turned lugs with stepped edges. This watch has an attractive, bright silvered dial with vertical satin finish and applied gold Arabic and faceted baton indexes. The watch is powered by Omega’s calibre 269 which is from the excellent Omega ’30’ series. 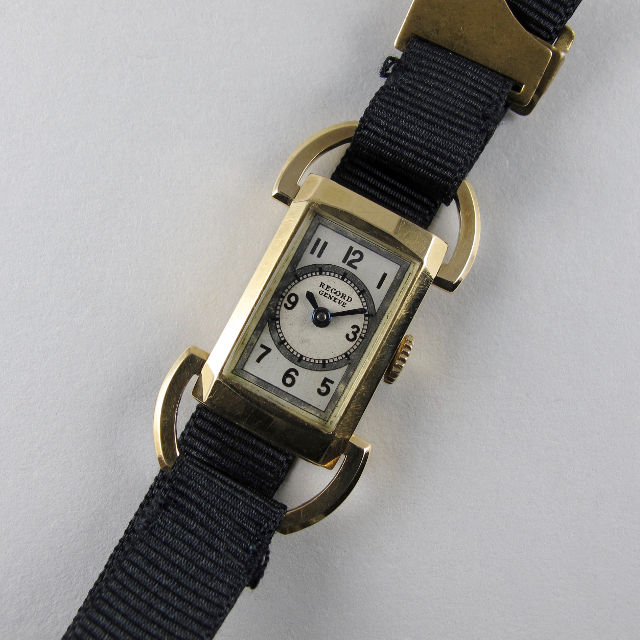 Shown above is a superb lady’s 18ct yellow gold wristwatch by Record, Genève which was made in c. 1935. The watch has an exceptional three-tone dial with eccentrically positioned Arabic numerals for the hours. Avant-garde in design, the dial is highly influenced by the Art Deco movement and demonstrates the extraordinary inventiveness of the finest early wristwatch dial makers. The main body of the dial is composed of a silvered satin finished surface, with a ‘mirror’ finished outer rectangular ring with central circle which is calibrated with black baton indexes for the hours. The centre of the dial is rendered in a third matte tone which is surrounded by the minute markers.  The 18ct yellow gold case was made for Record by Ponti Gennari & Cie who were Master Jewellers based in Geneva – their key mark (No. 2) can be seen to the inside case back. The case is in lovely overall condition with well defined angles and edges to the faceted upper case and substantial articulated lugs. Ponti Gennari are particularly well-known for their high quality gold watch bracelets which they supplied to, amongst others, Patek Philippe. Interestingly, the Patek Philippe Museum is now housed in the former Ponti Gennari factory building at 7, Rue des Vieux-Grenadiers…a handsome building by the way…conveniently located around the corner from my old apartment in Geneva. 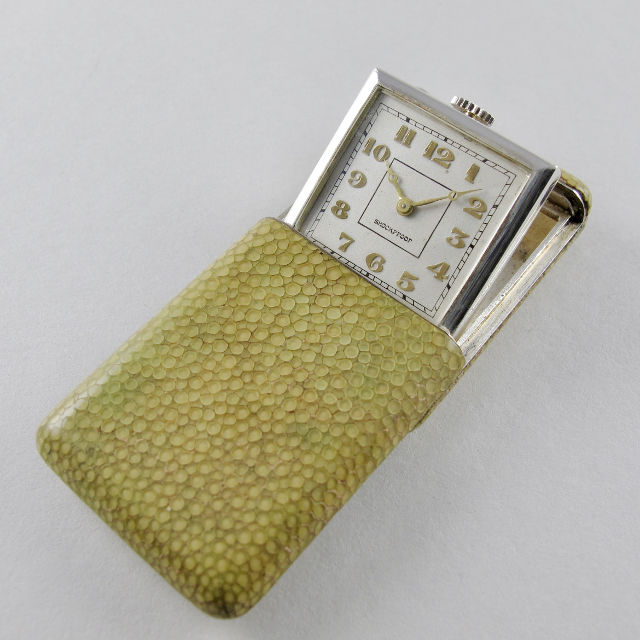 Continuing the 1930s theme and next up is a purse watch by Moïse Dreyfuss. Made in 1934, this travel watch has a body made from sterling silver which has been covered with shagreen. The shagreen to the case of this watch is colour dyed ray skin. Shagreen is a very attractive natural material that is extremely hard wearing yet malleable and easily dyed, it was a traditional and popular covering for the outer cases of pocket watches, especially in the 18th century. Although popular in the Art Deco period, where the use of shagreen may be found on a variety of small objects such as cigar boxes, lighters and brushes, it is relatively unusual to find its use on a purse watch. The cover of this watch slides backwards to reveal the dial which springs upwards when opened, making it an ideal travelling time piece which can also be stowed in a pocket or placed on a desk or bedside table. 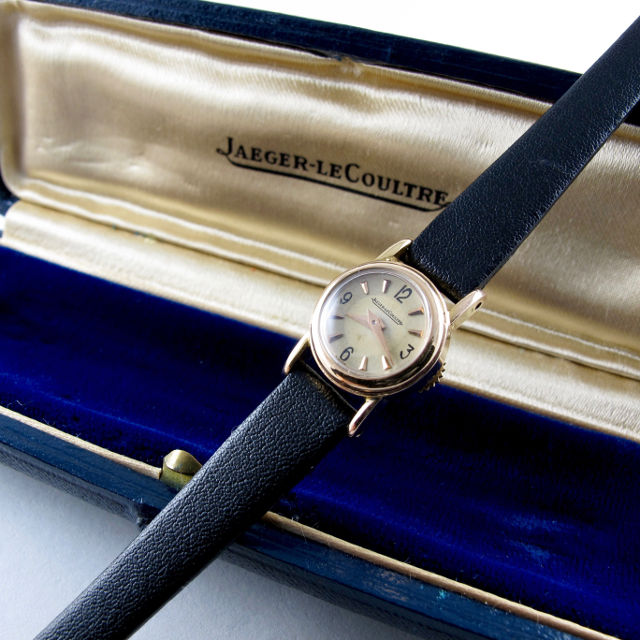 Heading into the 1940s next and shown above is an 18ct pink gold lady’s cocktail watch made by Jaeger-LeCoultre in 1948. Jaeger-LeCoutre are renowned for their ability to produce both small and slim calibre movements. This wristwatch incorporates one of the watchmaker’s smallest movements which was introduced in 1948 and is an 8 ligne, calibre 496 with a diameter of 15mm and a height of 3.4mm. The watch is cased in 18ct pink gold and the winder is concealed to the case back. The rim of the winder forms a slight lip to the right case side which allows the watch to be wound with ease using just one finger. The two-tone silvered and champagne dial is in excellent original condition with applied faceted pink gold triangular indexes and black painted Arabic numerals at the quarter hours. 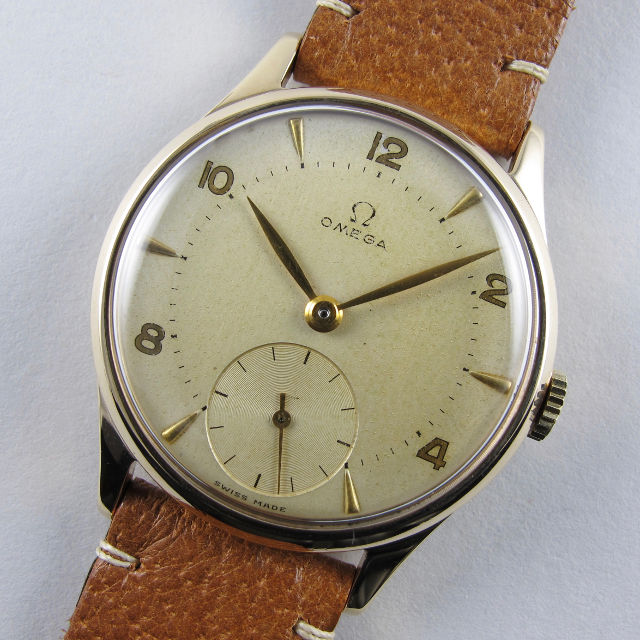 Dating to a year later than the Jaeger is the 1949 Omega wristwatch shown above. A Ref. 920, this is a 9ct gold wristwatch which has a patinated dial with combination gilded Arabic and raised triangular numerals. Omega’s Ref. 920 is an archetypal vintage wristwatch model with a handsomely proportioned case featuring a polished chamfered bezel, gently down-turned lugs and flat, polished, snap-on back. The model was available with a variety of different dial designs and our research suggests that the Ref. 920 was introduced alongside the steel Ref. 720 around the mid 1940s – the earliest example we have previously sold at Black Bough was hallmarked for 1945 and the latest, hallmarked 1956. This watch has been fitted with a handmade Christopher Clarke for Black Bough traditional pig skin leather strap. 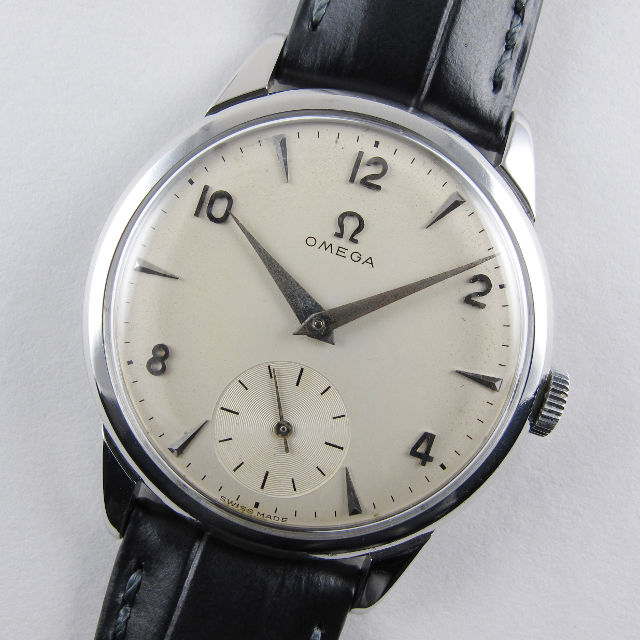 Pictured above is a classic 1958 Omega wristwatch in stainless steel with a handsome combination numeral dial. The applied Arabic and faceted triangular numerals are almost certainly made in white gold, being free of oxidation and remaining bright and clear, they contrast with the hands which have a chromed finish that has lightly spotted with age. Omega catalogues from the 1950s detail similar dials on steel models in which they note “silvered dial with 14 carat solid white gold raised figures.” 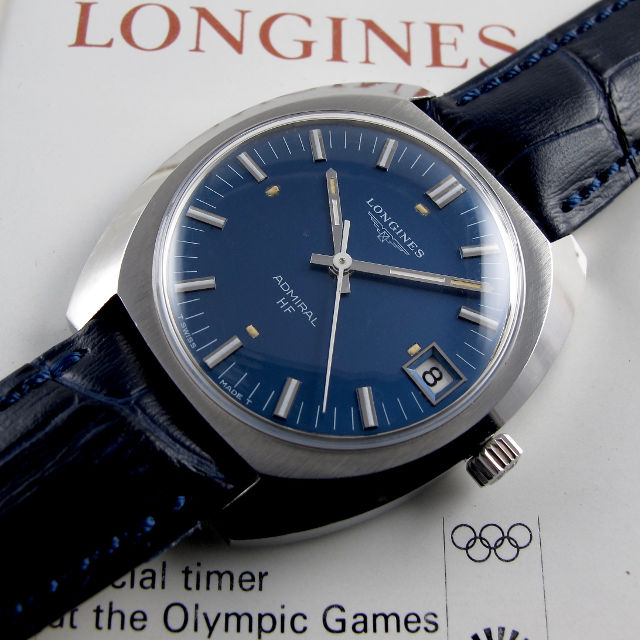 And rounding off this week’s newsletter is a special edition Longines Admiral, Ref. 2304, which was made for the 1972 Munich Olympics. The dial is in excellent original condition with a very handsome mid-blue metallic finish and unusual luminous rectangles at the inner quarters. With an angular, tonneau form design, the stainless steel case remains in original, un-polished condition, with excellent definition to its combination of finishes and the Olympic commemorative engraving to the case back. 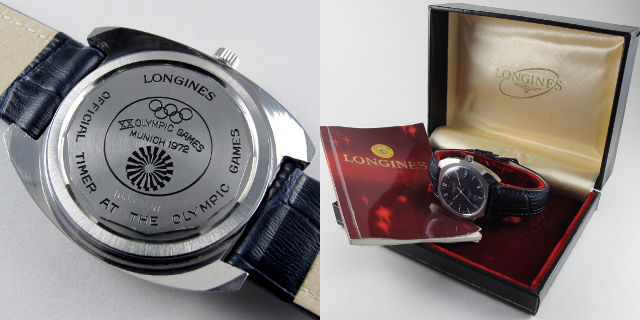 The movement is a Longines calibre 6952 which incorporates an unusual hack feature: when the crown is pulled out to adjust the hands, the seconds had will stop when it reaches the 12 o’clock position, the user can then push the crown back in upon a time signal or when synchronising to another timepiece and the seconds hand will immediately re-start. A quick date set feature is also incorporated via a second setting to the winding crown – when the crown is pulled out to the first position, the date can be manually advanced.

To automatically receive these updates via email, please select the ‘Join our Mailing list’ tab at the bottom of any of our web pages.