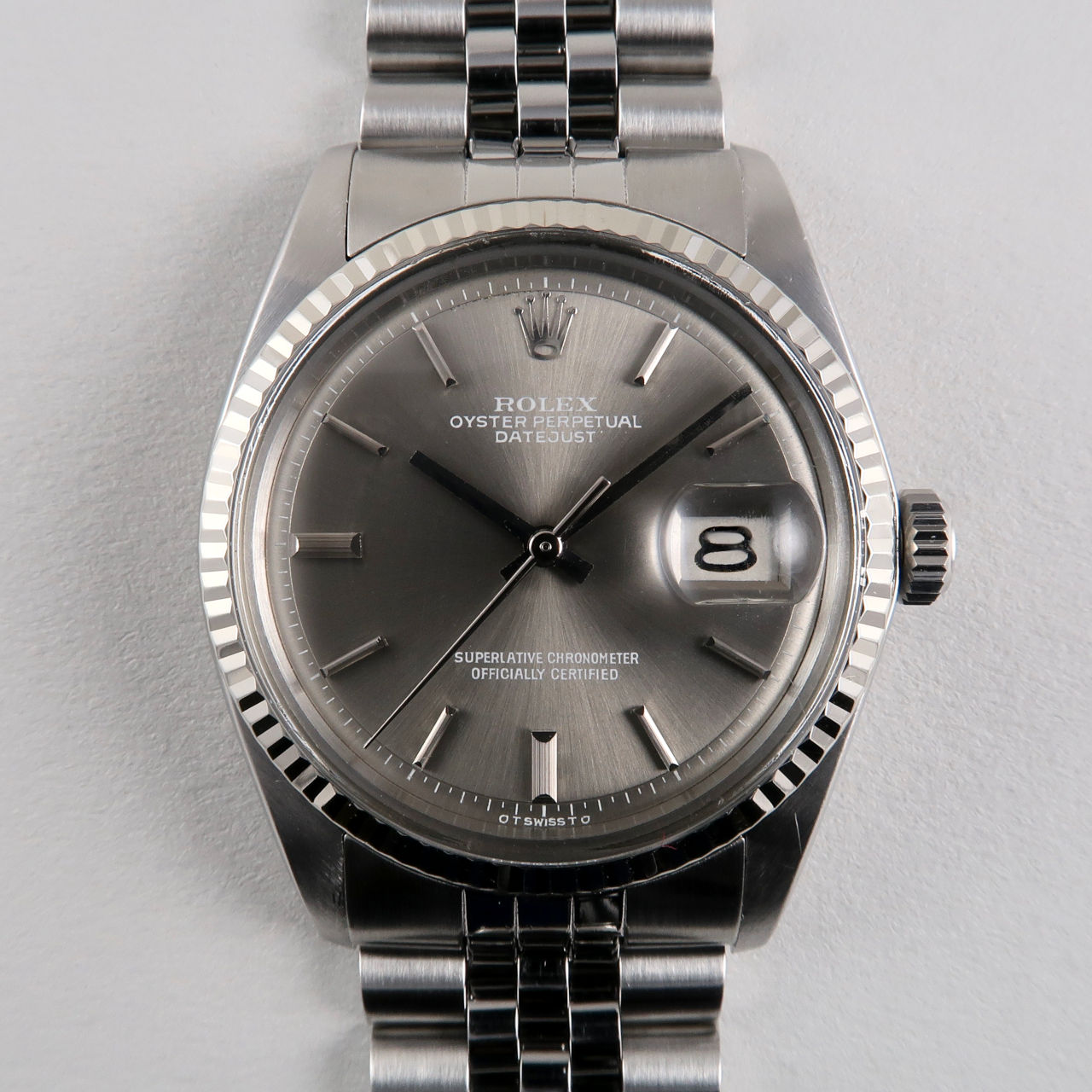 This update begins with an icon of 20th Century watch design – the Rolex Datejust Ref. 1601 – one of the most coveted of all vintage Rolex models. This example has a particularly desirable and charismatic grey ‘Sigma’ dial with contrasting white printed legend and tracking. So-called ‘sigma’ dials were introduced in the 1970s and are named after the use of the Greek letter which appears at the base of the dial to either end of the ‘Swiss’ graphic. These ‘sigmas’ indicate that the applied numerals to the dial are made from gold. Since numerals/indexes on watch dials are often either punched out from the dial’s surface and/or applied with a plated finish, the ‘sigma’ sign was a useful way to indicate when gold was used, thereby highlighting the quality of materials used. Gold indexes were not used as standard by Rolex and therefore ‘Sigma’ dials are especially prized by collectors. The edge of the dial with its track for minutes/seconds is stepped and chamfered, this creates a two-tone appearance and gives a greater sends of depth to the surface. It is interesting to note that neither the numerals nor hands have luminescent accents which is rarely seen as the majority of 1601 models had luminous detailing. Tritium which was commonly in use during this period often degraded the surface of coloured dials and its absence here has helped retain an excellent lustrous surface. 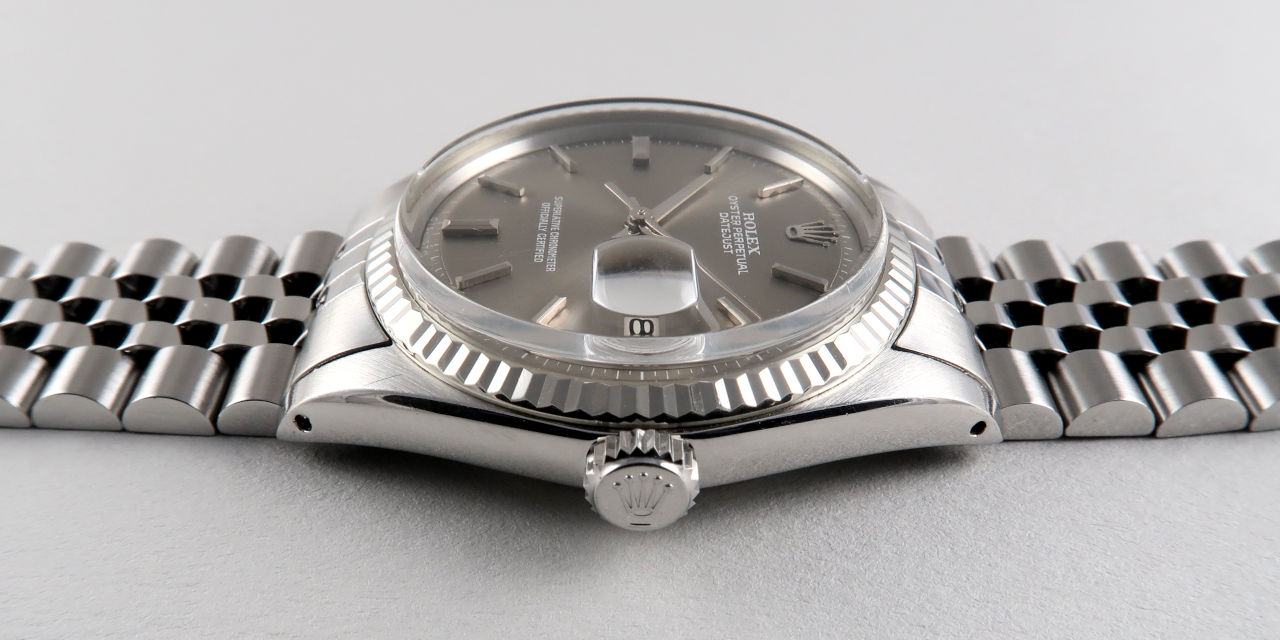 The stainless steel Rolex Oyster case has a white gold fluted bezel which retains excellent definition. Set to a stainless steel Rolex Jubilee model 62510 bracelet with folding clasp, the watch is also accompanied by two Rolex pouches, one grey, the other green. This watch was serviced by Rolex in June 2017 and is accompanied by the Rolex service booklet and card detailing the watch’s unique serial number. The watch has been used following its service and there are some light scuffs and scratches to the case, bracelet and crystal. There is some stretch to the bracelet. 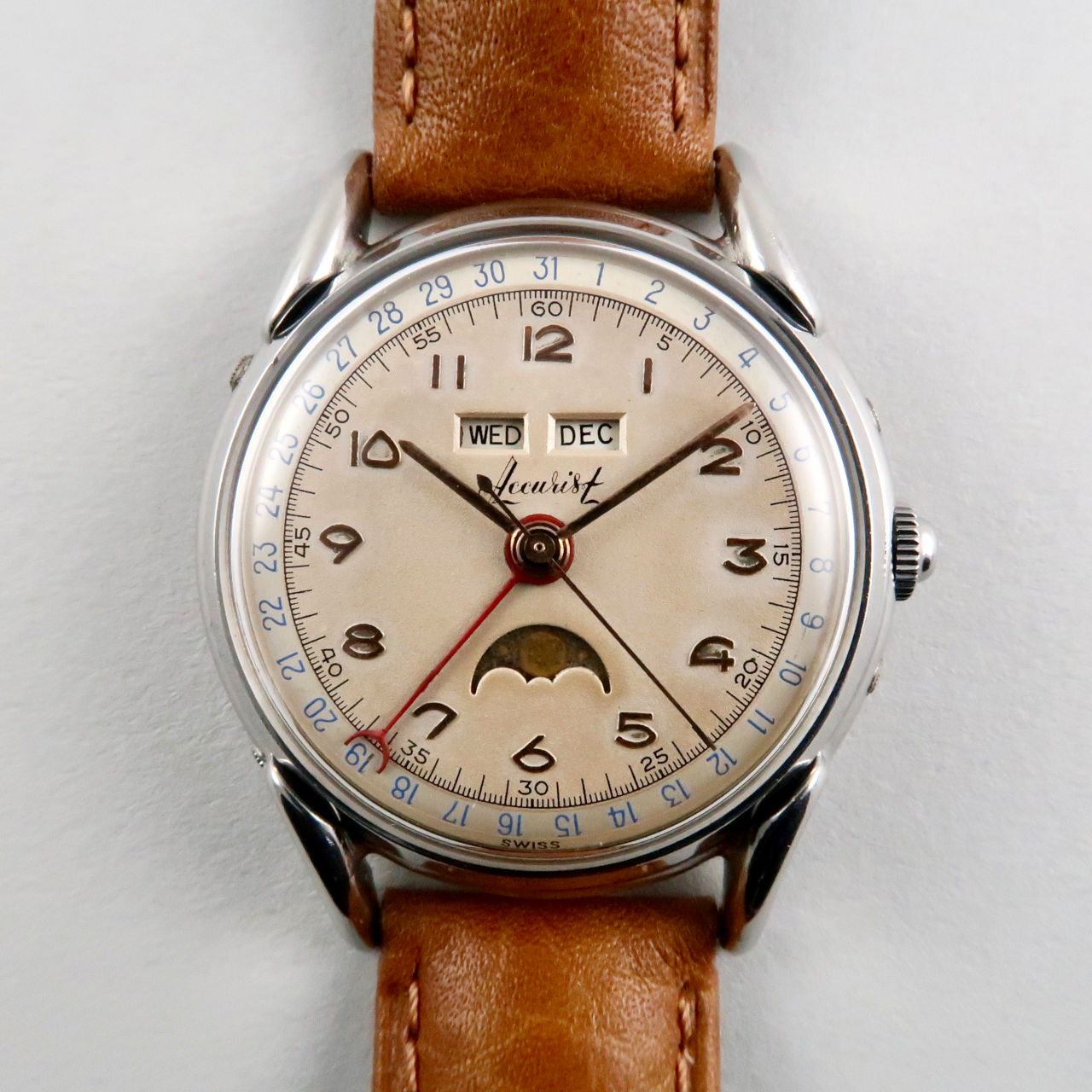 A very attractive vintage calendar wristwatch, this model has a stunning two-tone dial which is in lovely condition with a wonderfully warm and even patina. The date ring is calibrated in blue against a high sheen silvered surface and contrasts brilliantly with the main body of the dial. To achieve the secondary tone, the date ring is fractionally recessed into the dial plate and is therefore cleanly separated from the rest of the dial’s surface. The steel case retains very good definition with flared, horn-shaped lugs and a chamfered bezel. Manually wound, the movement is ETA’s 17 jewel calibre 1100 – one of the few calendar movements of the period to have separate pushers for quick and easy adjustment of all indications. 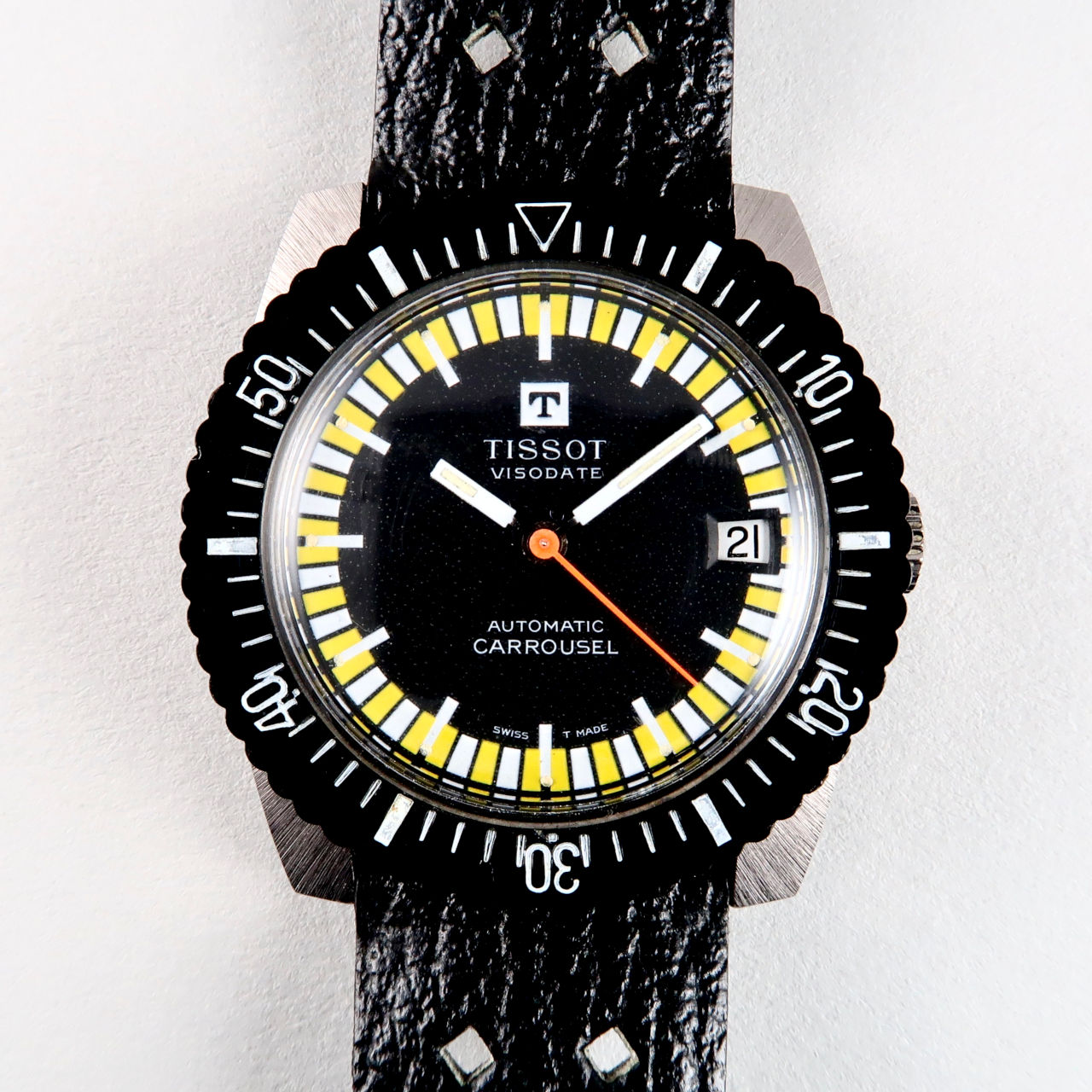 Introduced in the 1960s, the Tissot Carrousel is a vibrant, sporty model that features a bi-directional rotating plastic bezel. Designed to easily clip on and off, the plastic bezel was interchangeable with a variety of differently configured bezels, allowing a range of uses. The range of bezel options originally offered by Tissot included pulsation, tachymetric and world time calibrations. The present watch is fitted with a traditional time elapsed scale – if the bezel is rotated to line up with the minute hand, the bezel can then be used to record time elapsed by the minute hand.

In excellent condition, the upper case retains crisp satin detailing to the tops of the lugs and the watch is also fitted with its original Tissot crown, Tissot leather strap and broad matt finished buckle. The Tissot calibre 784-2 movement has provision for semi-quick date change – whilst the date will change each day around midnight, it can also be advanced manually, when required, by moving the hands repeatedly between 21.00 and 01.00. 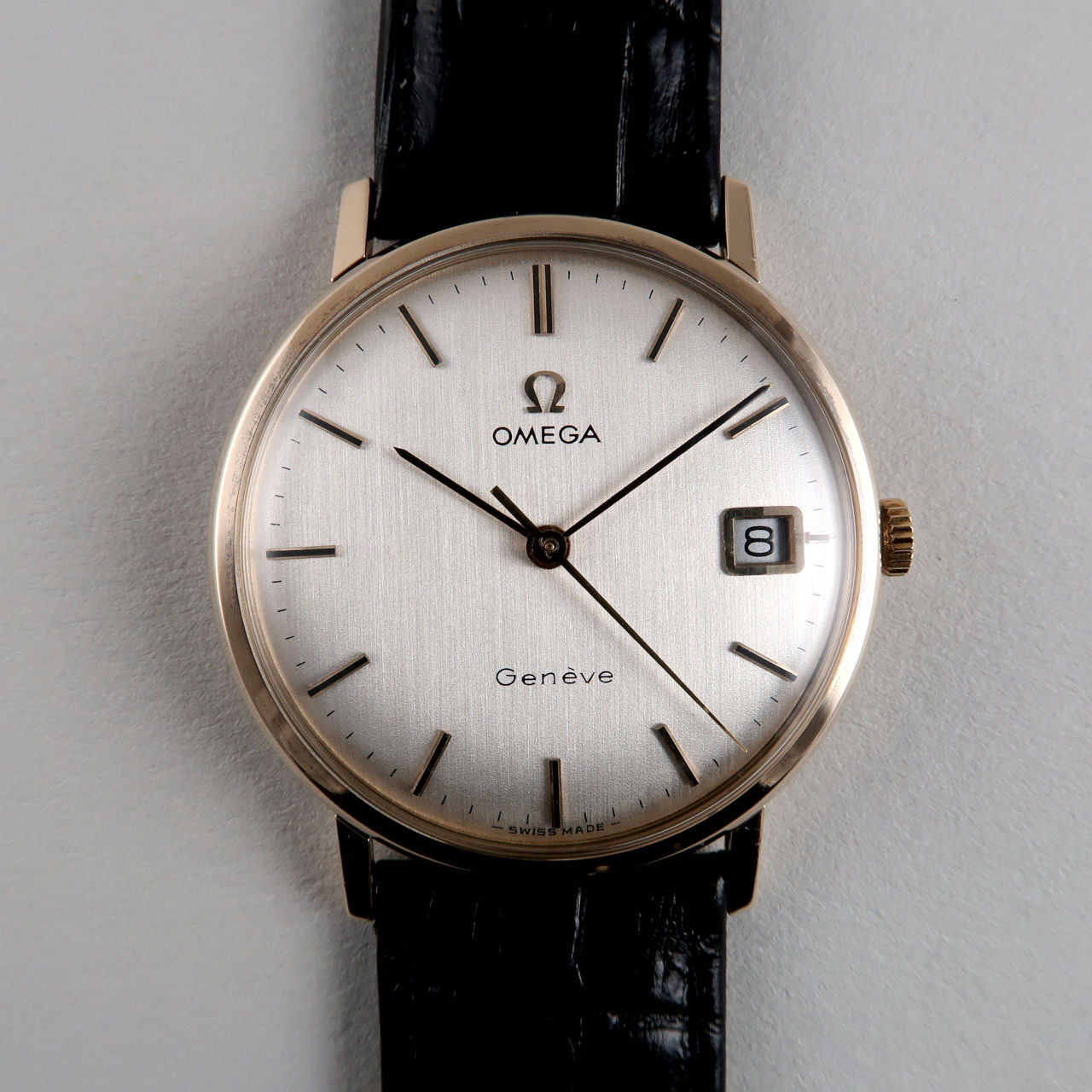 This gentleman’s dress watch has a vertically satin grained dial. The applied gold indexes have slim black panels to their centres and the baton hands are styled to match. The 9ct yellow gold case has straight lugs and a polished finish with satin finished centre to the case back. Manually wound, the watch is powered by an Omega calibre 613 which has provision for quick date adjustment via a second setting to the crown. The new leather strap is fitted with the watch’s original gilt-metal Omega pin buckle. 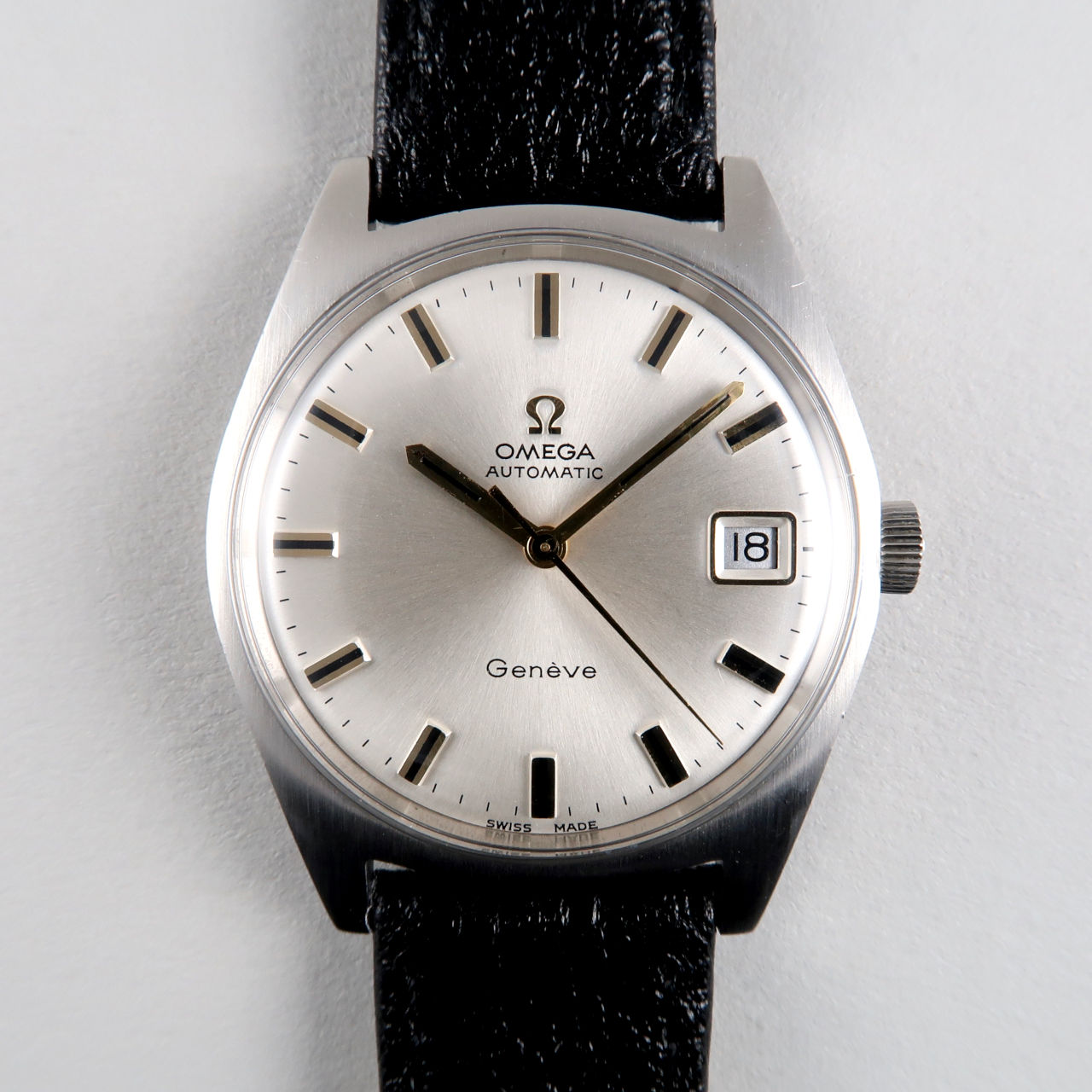 Reference 166.041 was first introduced by Omega in 1968 and the serial number of the example shown above suggests that it was made shortly after the model’s debut. The model incorporates the excellent automatic Omega calibre 565 movement with 24 jewels and precision regulation. Calibre 565 includes provision for fast date adjustment via a secondary crown setting. This example of the model features a satin finished silvered dial with applied gold coloured indexes, each centred with black inserts. The stainless steel two-piece case has a brushed, satin finish and a screw-down case back. The watch is in good overall condition and retains an Omega signed crystal and crown, there are some small scuffs to the case. 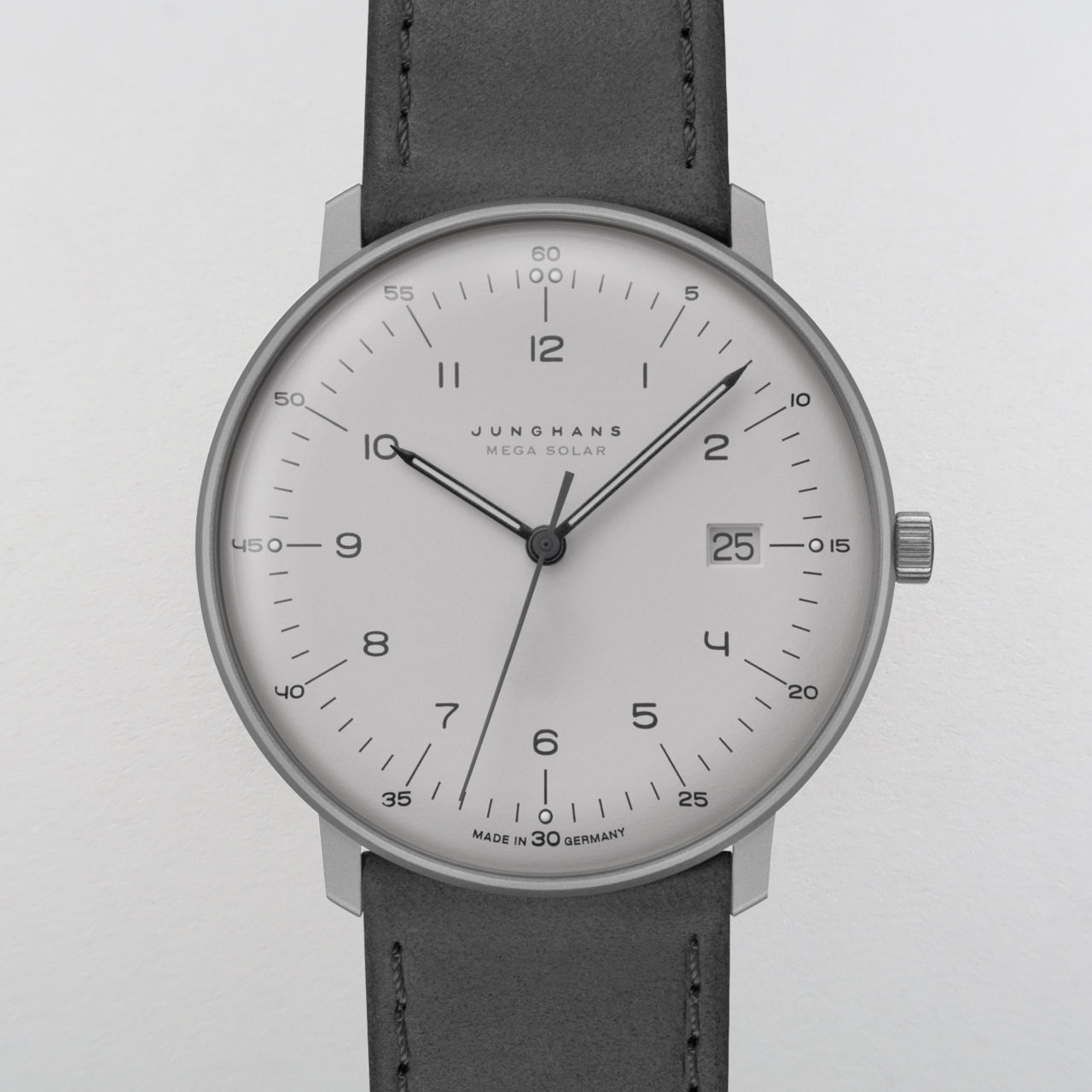 Ultra light, this recently released Max Bill model weighs just 24g and incorporates a state of the art radio and/or App controlled movement. The watch automatically converts between summer and winter time and to different time zones. The date acts as a perpetual calendar and will automatically adjust for the differing lengths of the months. Radio transmitting reception is available in the UK & mainland Europe, USA and Japan. For areas unable to receive a radio signal, global time synchronisation can be transmitted to the watch via a smartphone using the Junghans MEGA App. The watch will operate in quartz mode when a signal is unobtainable.

The watch is powered by the sun using specially designed solar cells which are invisible to the naked eye. Even when completely drained of power the watch will become fully functional after just 8 minutes of direct exposure to the sun. Moreover, the movement has a power reserve of up to 3 years. 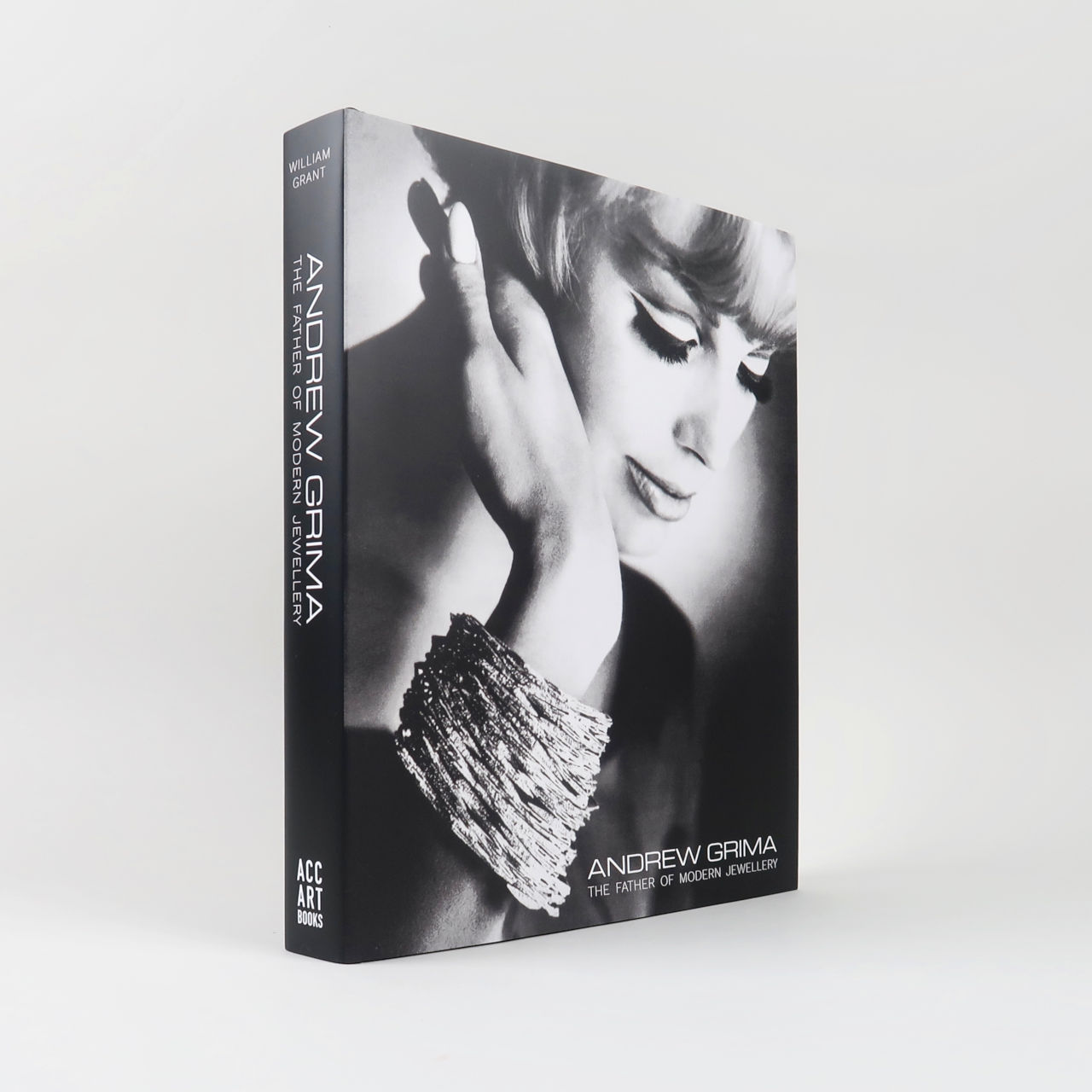 As the subtitle of this book states, Andrew Grima really is the father of modern jewellery. He established a new vocabulary for jewellery and his designs from the 60s are now hugely sought after. He was determined to banish the traditional flower spray brooches of yesteryear and create exciting new pieces that chimed with the changing times. His Jermyn Street store was equally daring and confrontational in its design with a facade designed by the abstract sculptor Bryan Kneale. From this store the glitterati of the age bought jewellery; he subsequently opened further stores in Sydney, New York , Tokyo and Gstaad.

What makes Grima of interest to those passionate about watches are his collaborations with Omega and Pulsar. Watch brands have at times been rather traditional in their ideas of how watches can look – this has resulted in tiny refinements of classic watches. Some of the most exciting watches have, however, come to pass via watch brands collaborating with jewellers – Patek Philippe’s work with the Swiss jeweller Gilbert Albert, for example, resulted in a range of daring asymmetric watches. Andrew Grima collaborated with Omega in 1970 and Pulsar in 1976. Grima’s work with Omega resulted in a collection known as About Time, Albert had worked with Omega previously but only on bracelet design. Grima went all out on the About Time collection; it comprised 86 individual pieces, 55 of which were watches, they contained Omega movements but took the form of pendants, bracelet watches and ring watches. The collection launched at the Goldsmiths’ Hall in London on 4th May 1970 and caused a sensation.

Grima later worked with Omega on some more designs, contributing to their Jeux D’Or, Constellation and de Ville ranges, but it is the About Time works that are the apogee of his watch design work.