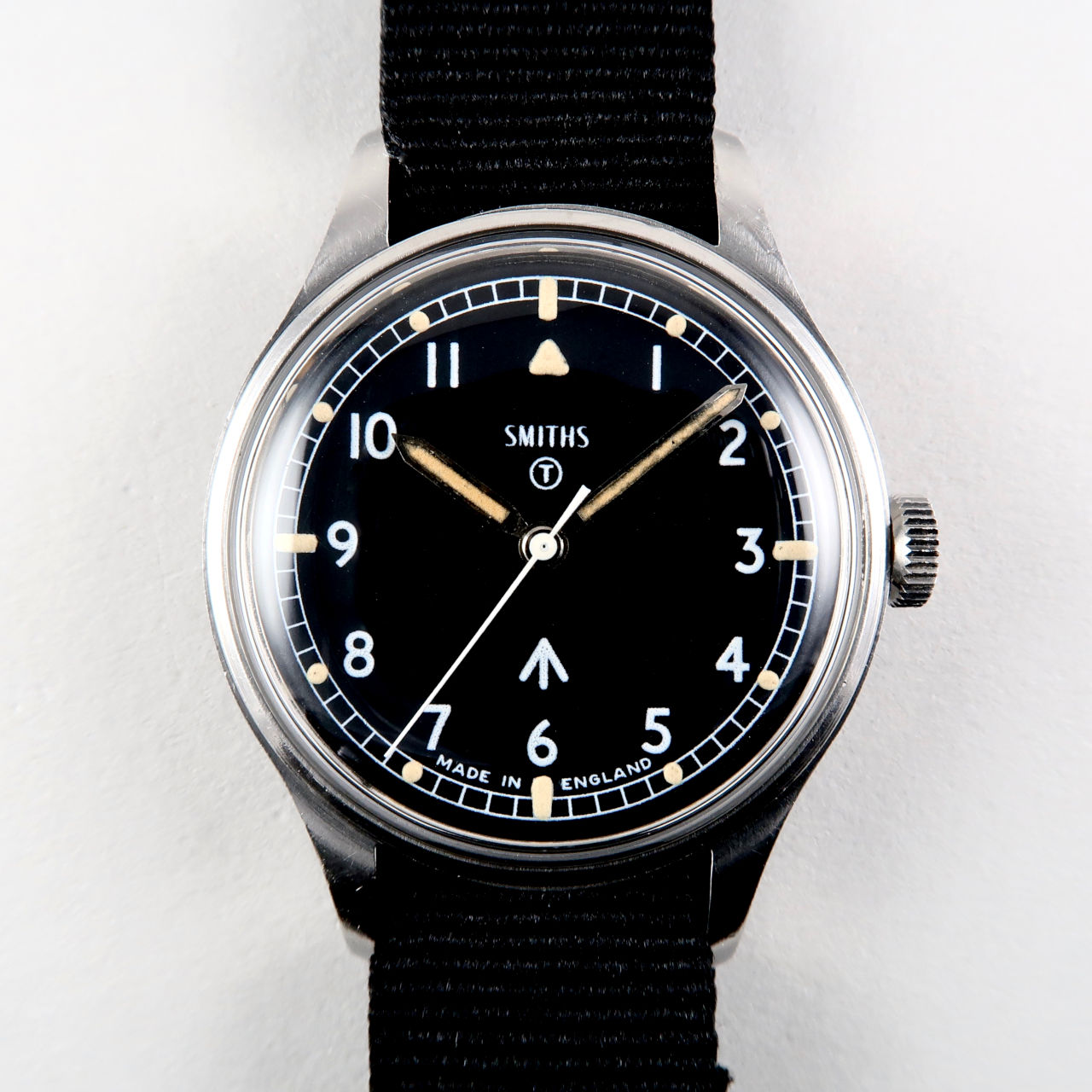 Headlining this update is a Smiths W10 military wristwatch. An increasingly popular model, for many years it was largely forgotten just how good a watch it is. Using a robust steel case and a Smith’s in-house English made calibre 60466E, these watches were designed as highly accurate timekeepers. Provision was made for a hack feature so that the time could be easily synchronised for operations – when the crown is pulled out the seconds hand will stop, when pushed back into the case, it immediately restarts. Although these watches were made in the 1960s and 70s, their styling was based on the architecture of the WWW watches made by Omega and others for the British military towards the end of the Second World War. 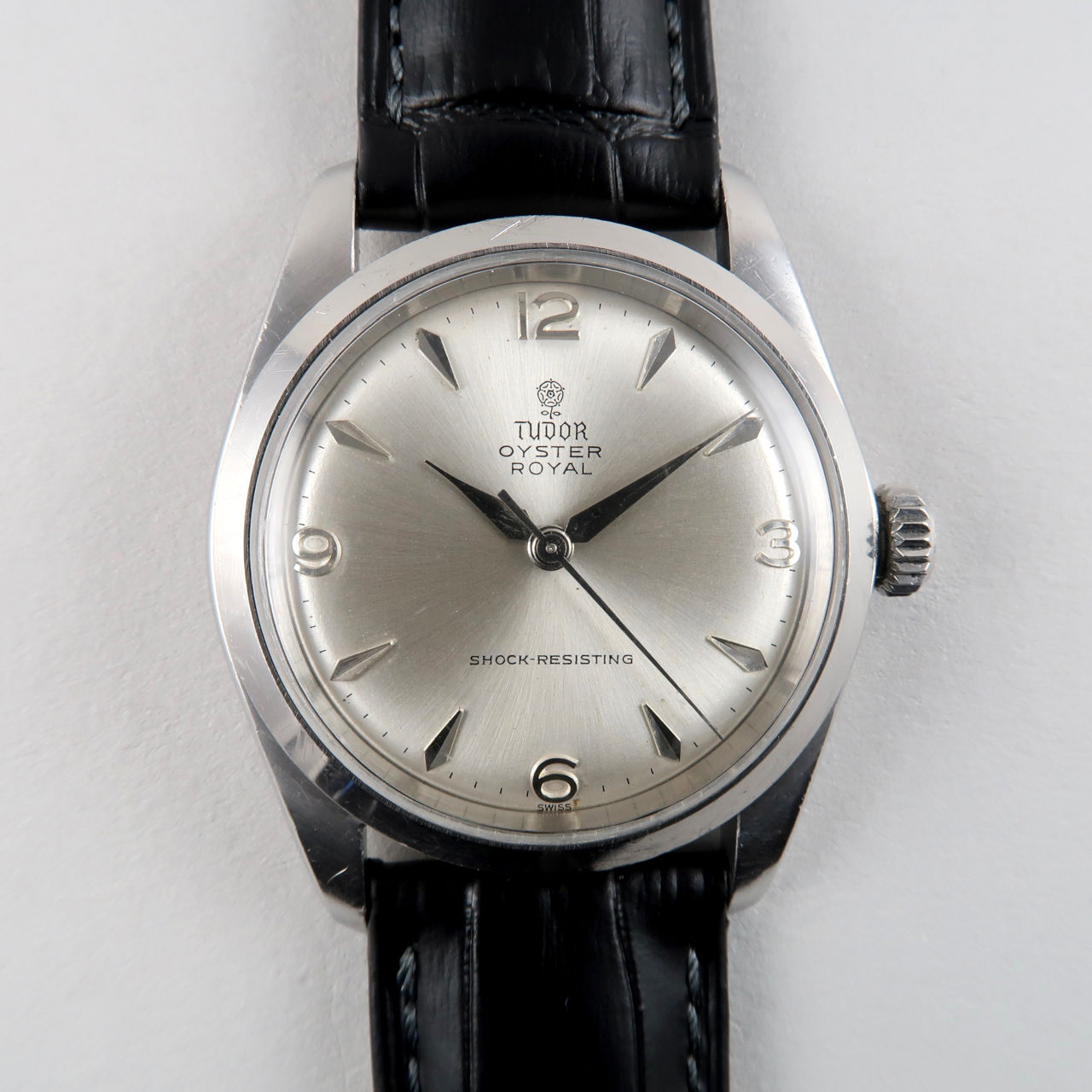 Direct from the original owner’s family, this watch was a retirement gift from the M.P.A. (Metropolitan Pensions Association) of Haymarket and a dedication from the firm can be found engraved to the case back. The 7934 Oyster Royal was made with a variety of different dial designs, the present with Arabic and faceted dagger numerals being one of the most attractive. Cased in stainless steel, the watch retains good thickness and definition to the bezel and lugs, there are scuffs and scratches to the case. 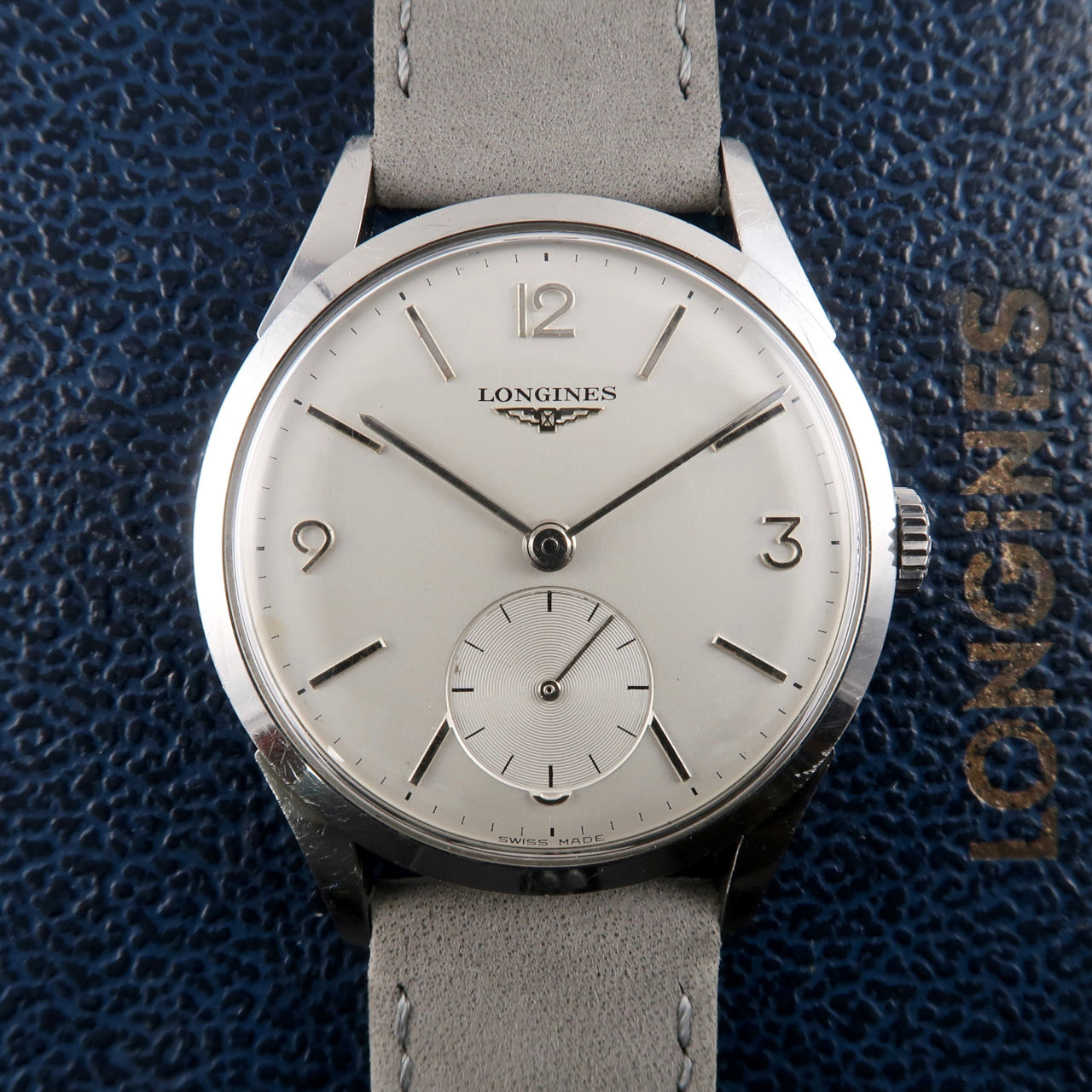 Ref. 6666 is an especially handsome Longines model with a crisply cut case, slightly flaring lugs and a bold chamfered bezel. The dial of this example has prominently raised hour indexes which add depth to the surface and their baton and stylised Arabic format are particularly pleasing. Manually wound, the watch is powered by the excellent Longines calibre 12.68Z. Records held at the Longines archives note that this watch was originally invoiced to the firm’s UK agent, Baume, on 2 June 1959. This watch is accompanied by its original blue Longines presentation case with white silk lined interior to the lid and blue velvet fitted pad for the watch. 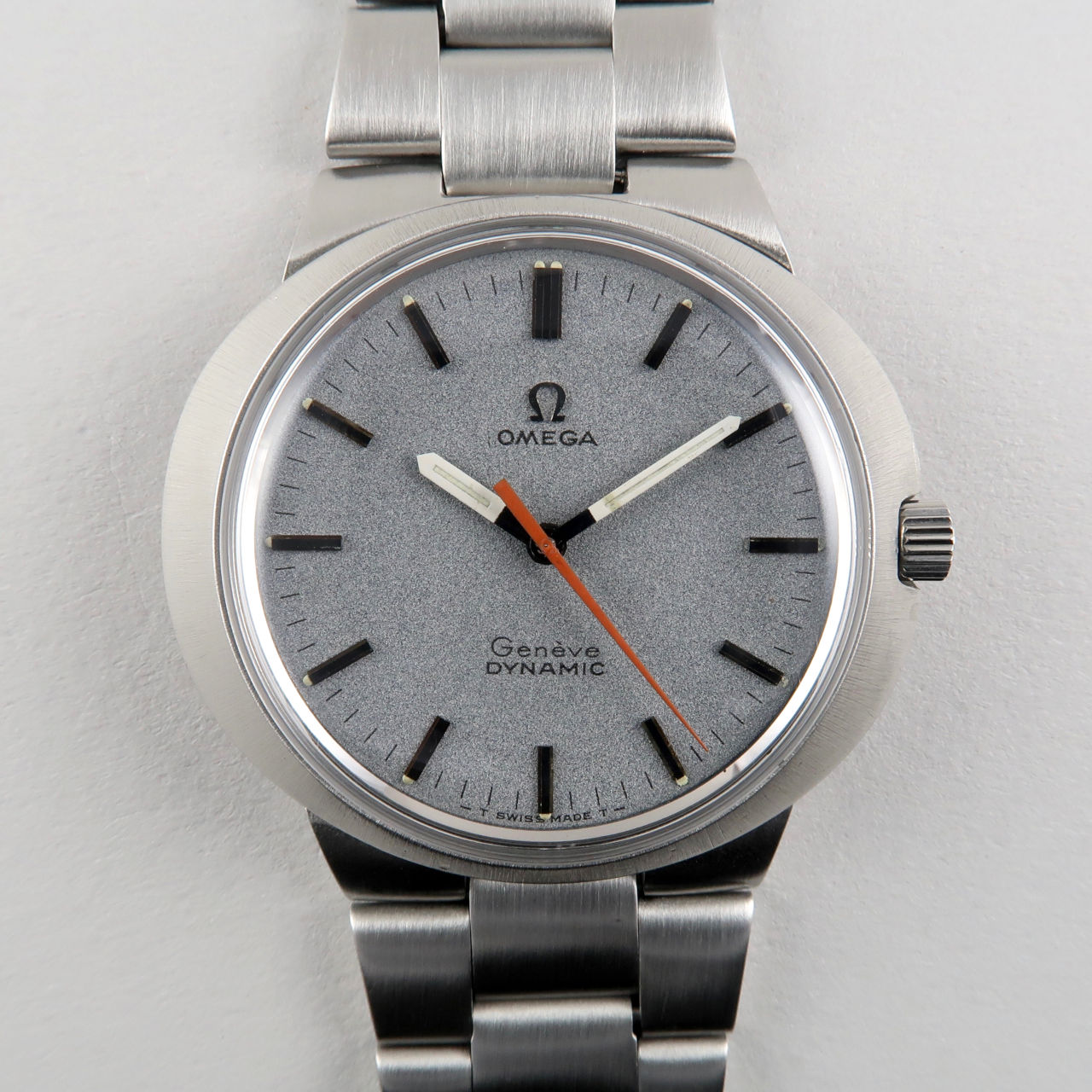 The mid-blue speckled dial of this watch is one of the more unusual of Omega’s designs for the Dynamic. Although a paint effect, the dial’s surface has the appearance of stone; at the time of this watch’s production, expensive hard-stone dials were increasingly fashionable. The large elliptical case is made from a single block of stainless steel and the watch is fitted with its original steel Omega Dynamic bracelet with adjustable folding clasp. 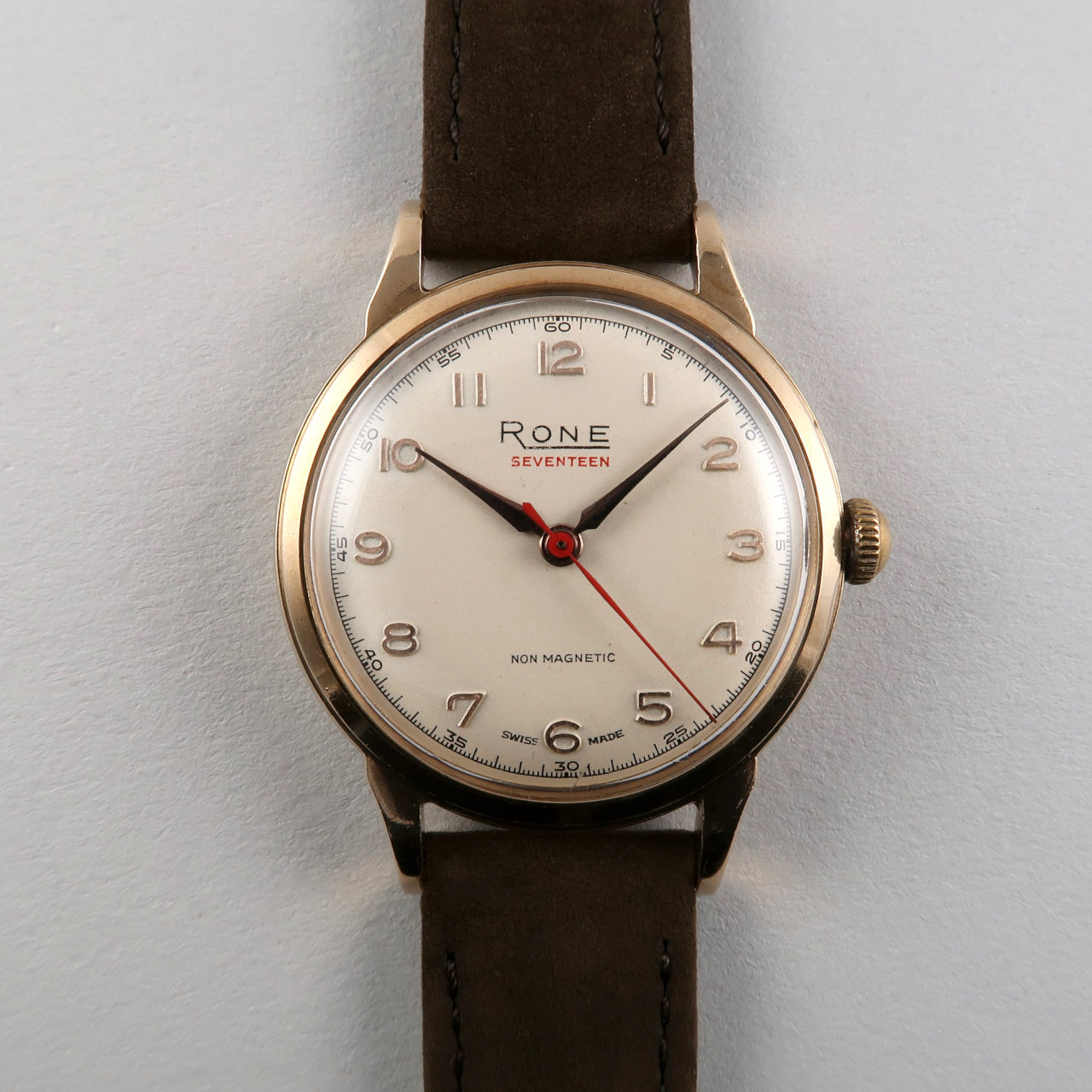 This mid-century watch by Rone is detailed to the dial in red ‘Seventeen’, this refers to the movement which is a 17 jewel calibre. Although signed by Rone, the base calibre was made for them by FHF (Fontainemelon) a major Swiss movement manufacturer which supplied ébauches to many different companies. The case is made from 9ct gold and was supplied to Rone by the specialist case maker Dennison, their stamp A.L.D. appearing below that of Rone to the inside case back. The case is two-part with a solid upper body and separate screw-down back. 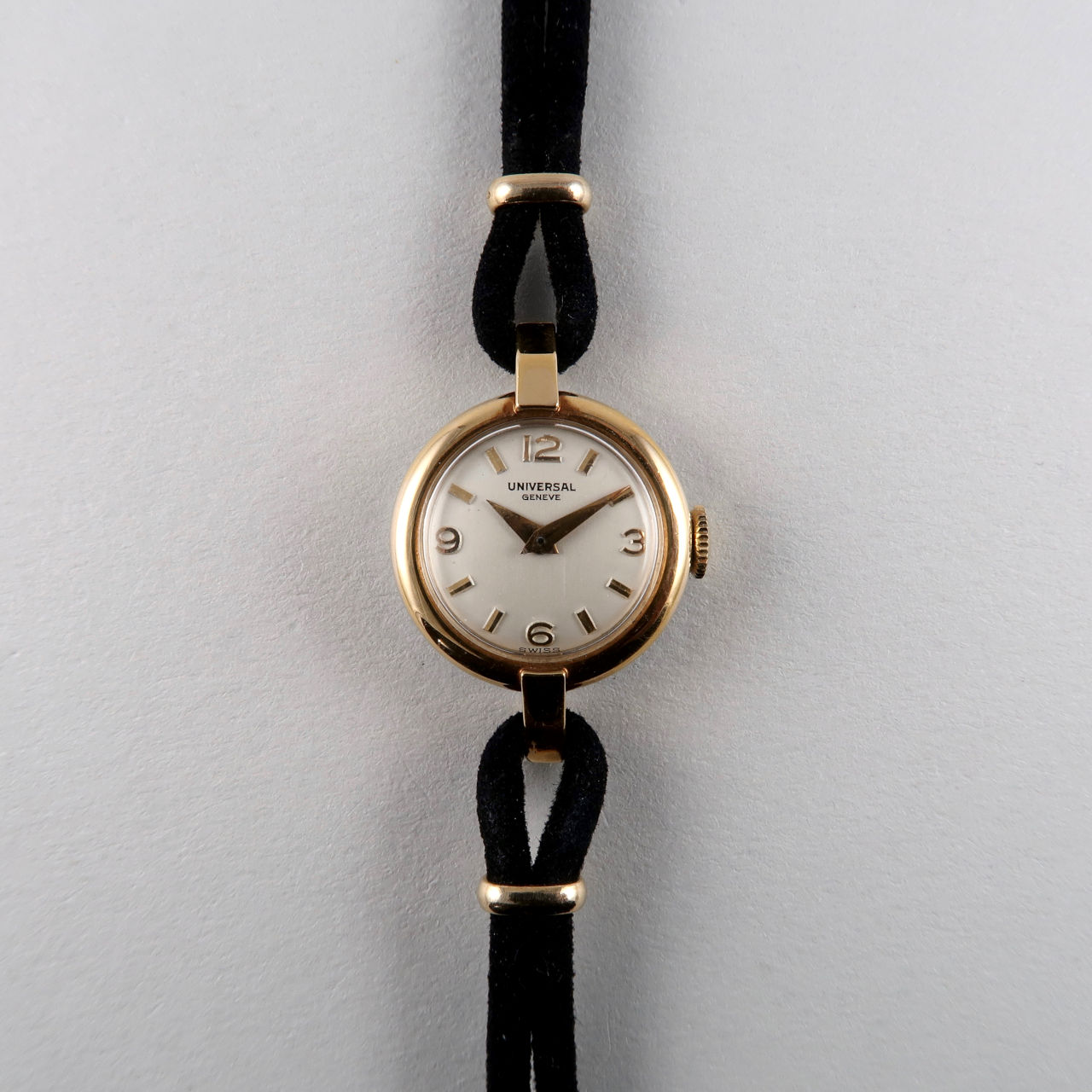 In very good original condition, this lady’s small cocktail watch has a crisp case and clean dial. The watch retains what is almost certainly the original suede corded strap with gilt-metal mounts. Cocktail watches were particularly popular during the 1950s and the present watch’s serial number dates it to the middle of that decade.

To automatically received these updates via email please select the ‘join our mailing list’ tab at the bottom of any of our web pages or you can also subscribe HERE.