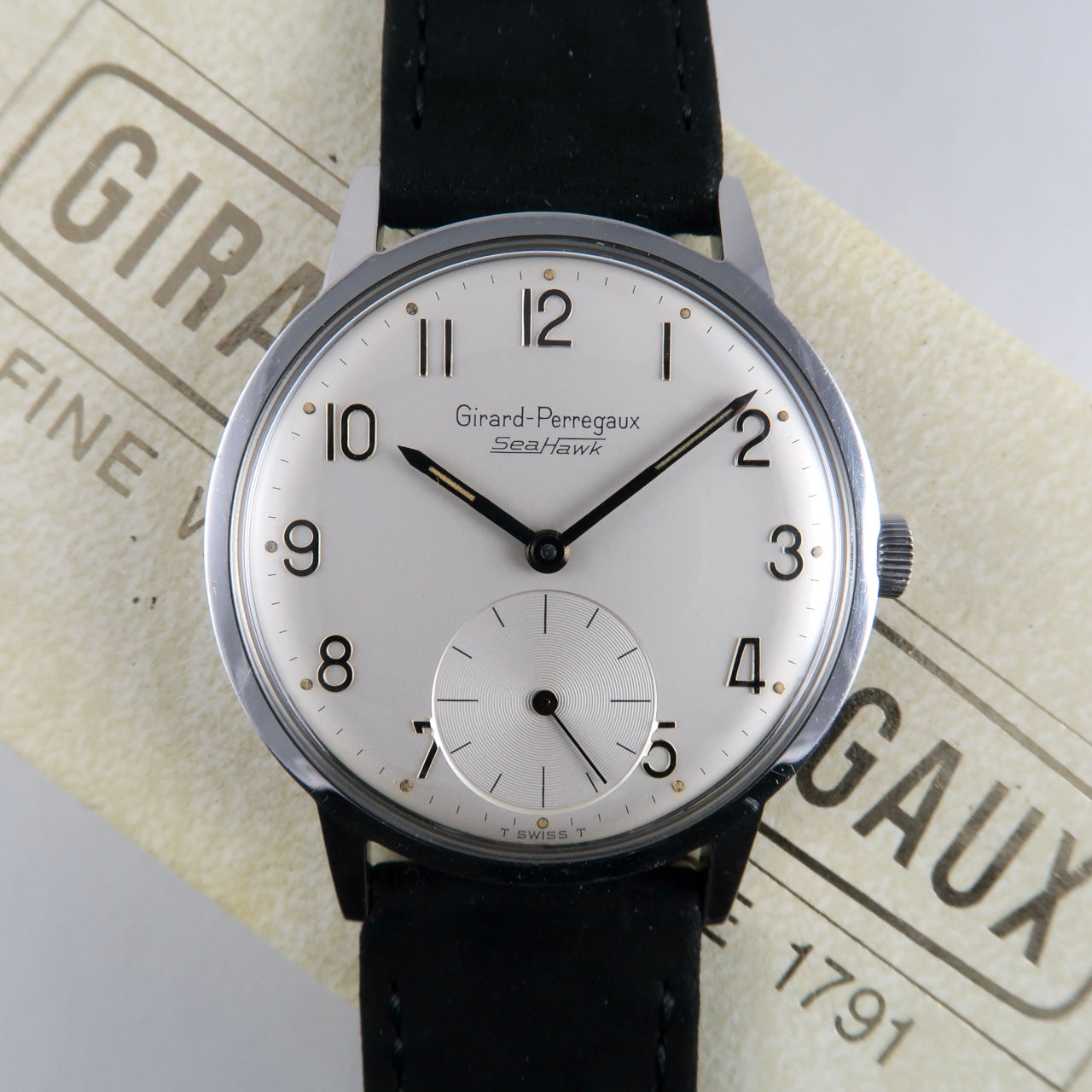 First up this week is a hand wound Girard-Perregaux ‘Sea Hawk’ from c.1965 with original box and GP pin buckle. Eye catching blackened numerals and hands contrasting with a silk matt silvered dial create a winning combination on this wristwatch. The luminescent dots above the numerals and the panels to the hands add a subtle hint of warmth to the otherwise stark design. A large engine-turned seconds dial adds further detail and interest. Cased in stainless steel, the watch has a solid upper body and separate screw-down back. 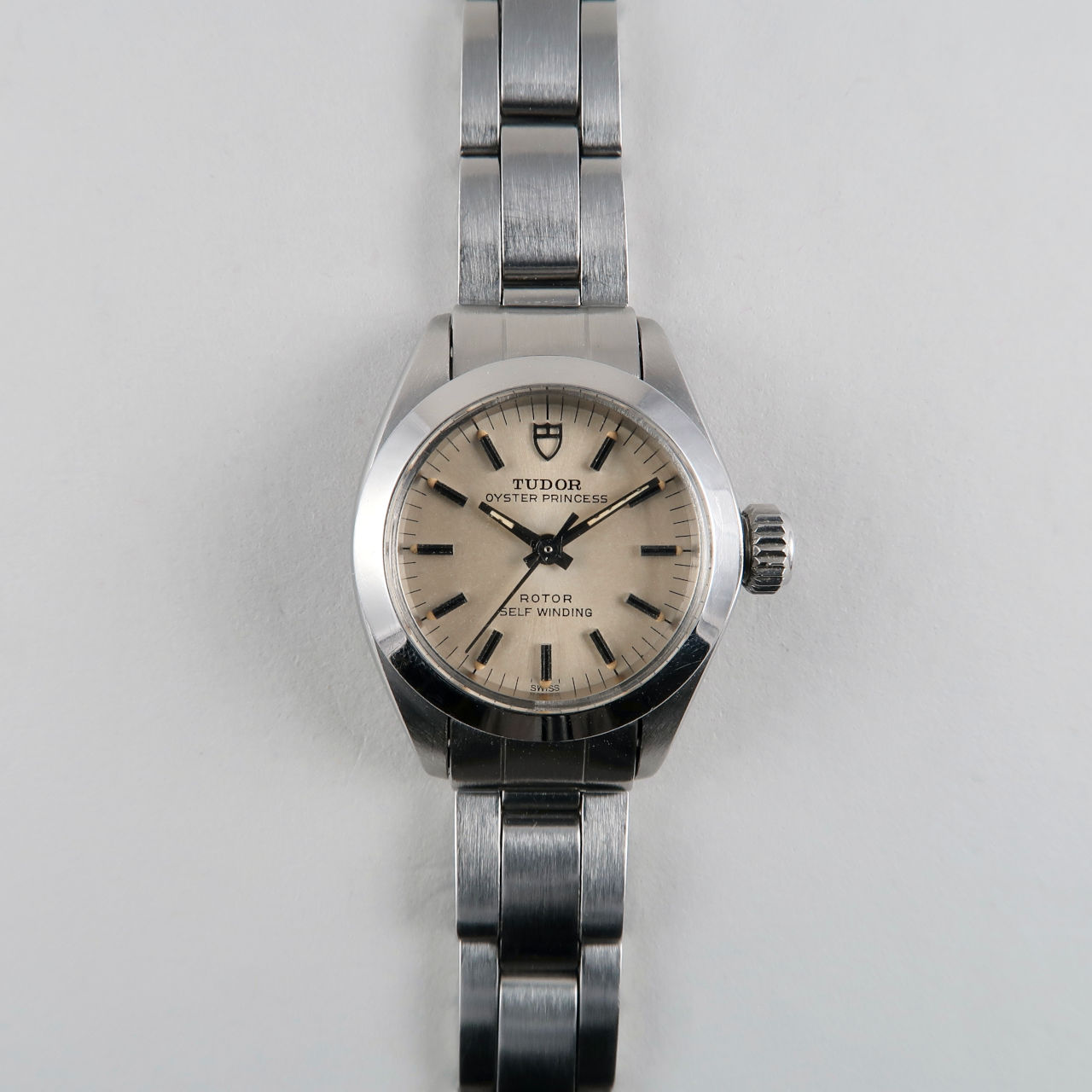 This lady’s Oyster model has a light champagne coloured dial with satin finish and the faceted hour indexes are centrally set with black panels to increase visibility. The classic Rolex Oyster case has a smooth chamfered bezel and robust screw-down case back. Fitted with a steel Tudor/Rolex Oyster bracelet, the clasp has a ladder-form adjustment with a maximum bracelet length of 165mm – the bracelet is detachable and the watch can be worn with a leather strap if preferred. 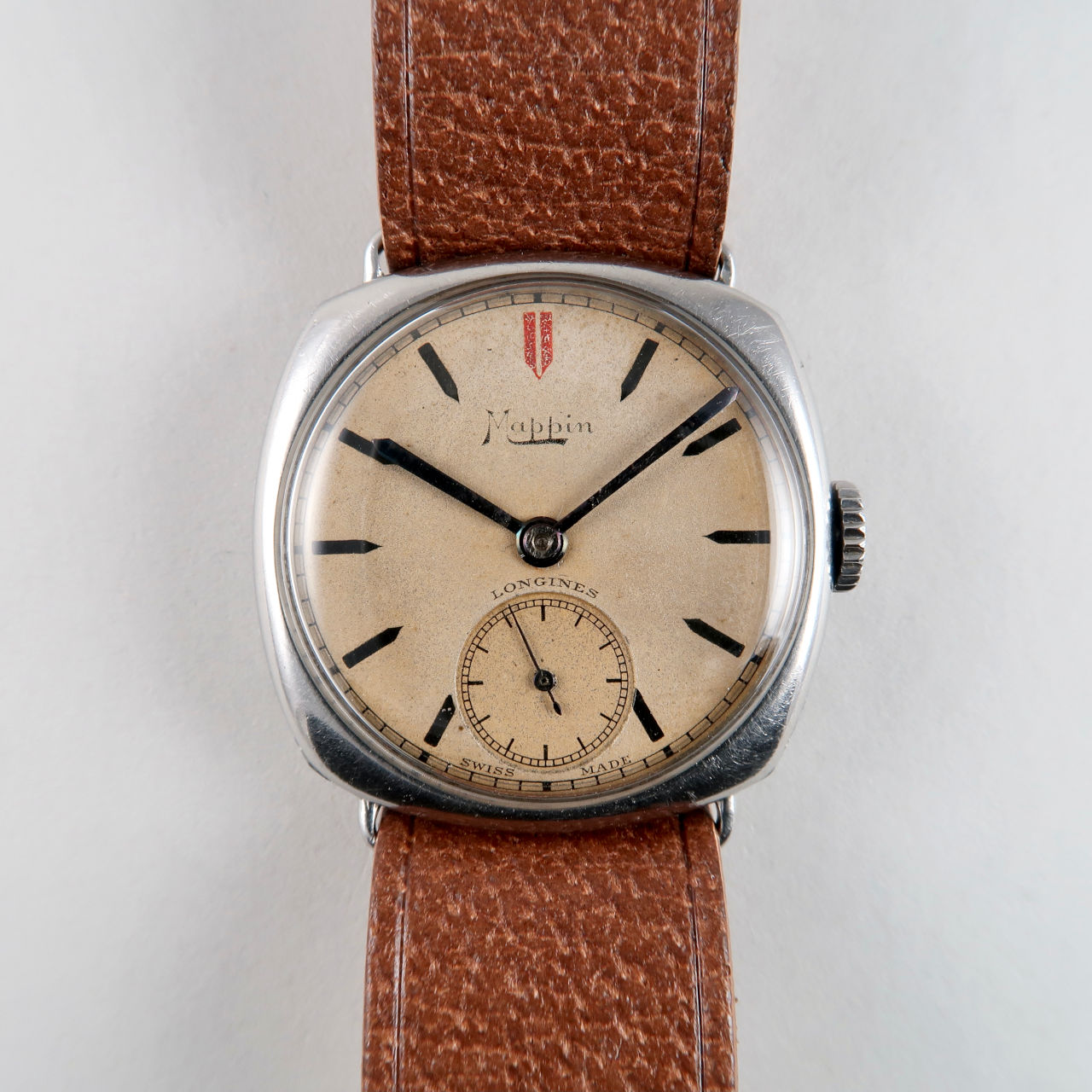 With its strong bold lines this watch is pretty much Art Deco encapsulated. Cushion-form cases were one of the first ‘shaped’ designs to appear on the market after the mainstream introduction of the wristwatch in the 1910s and became especially popular during the 1920s and 1930s. The twin-baton 12 o’clock numeral is accented in red to highlight its position. Above the subsidiary seconds, the Longines signature follows the dial’s curve, this placement was a deliberate design element and allowed space at the top of the dial for the retailer to prominently apply their own logo. In this instance the logo is that of Mappin…and a crackingly good logo it is too, adding much to the watch’s character and charm. Mappin has a long and distinguished history. In 1897, the company were given their first Royal Warrant from Queen Victoria and the firm has been awarded a Warrant by every succeeding monarch. 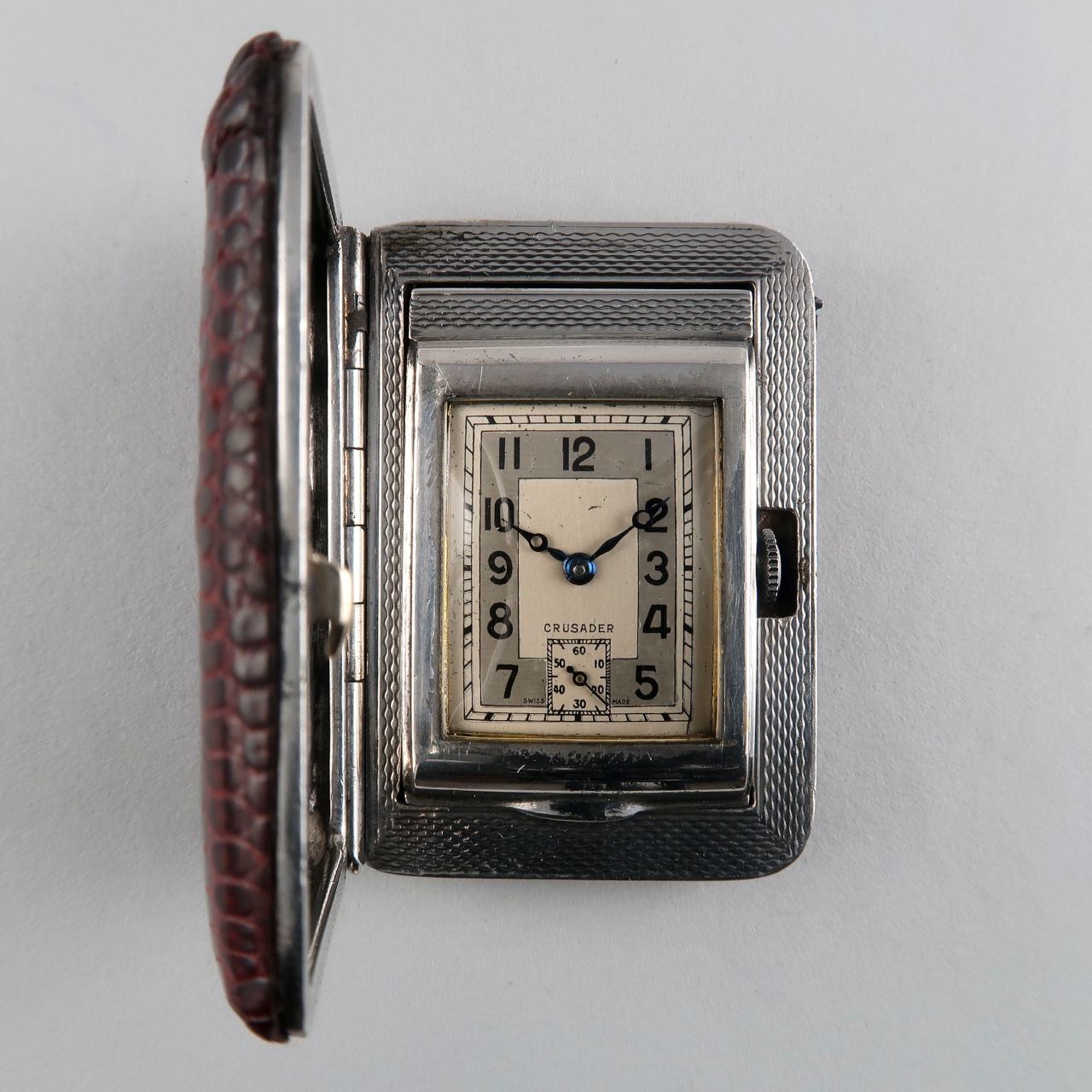 An attractive purse watch with a pleasing dual-action sprung closure, the sterling silver and leather covered case was made in the UK and fitted with a movement supplied by Crusader, a sub brand of the Swiss watchmakers Henri Sandoz & Fils. The two-toning of the silvered dial provides contrast between the background of the Arabic chapter and the main dial body. The inner case is hinged into the outer and ‘clicks’ into place with a lip at its lower edge, this allows the inner case to be easily lifted to gain access to the winding crown. The main outer case has engine-turned covers – the front is opened by sliding away to release the sprung cover which flips up to reveal the dial. 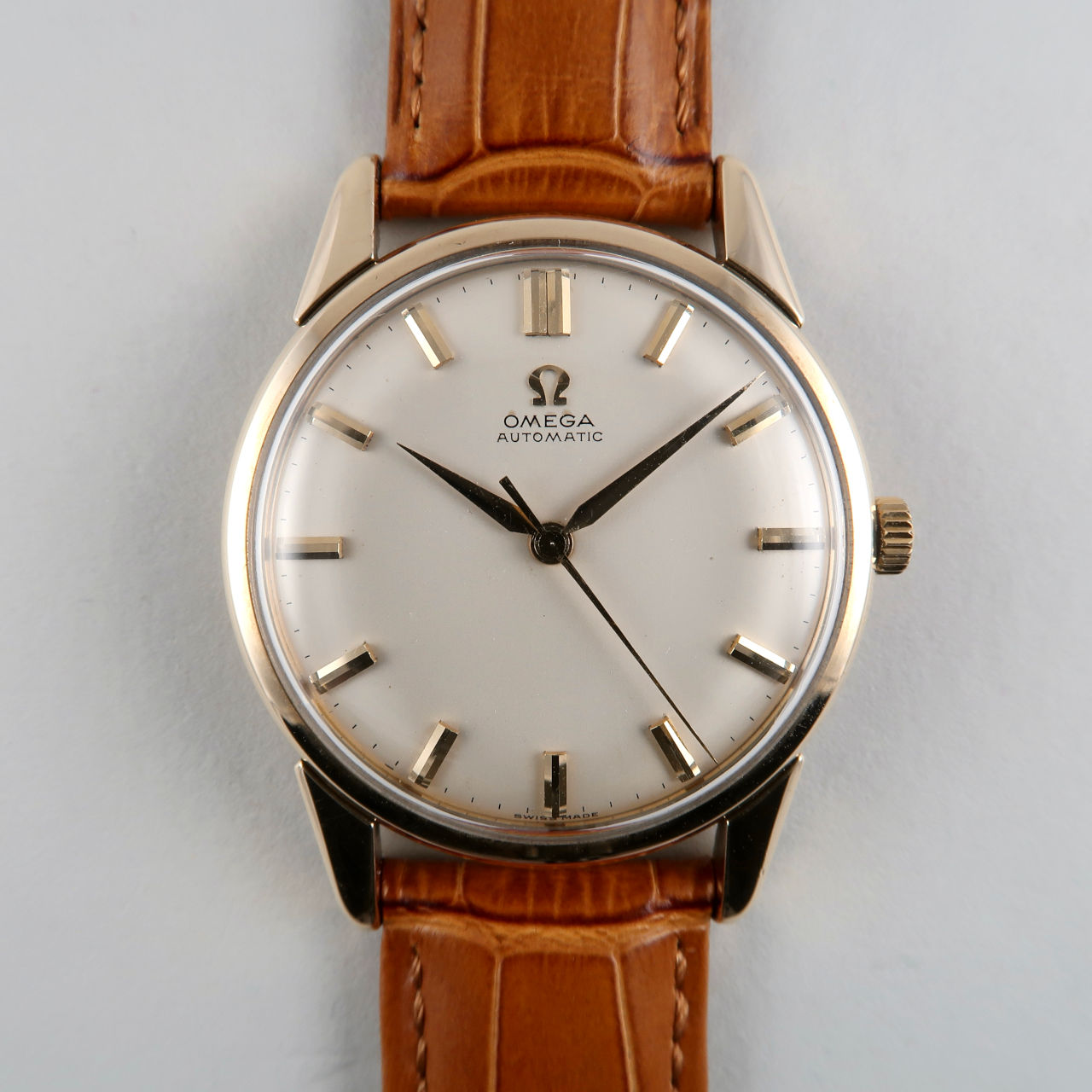 This Omega wristwatch has a lustrous silvered dial with bold, applied gold faceted hour indexes. The 9ct yellow gold case, which as been re-polished, has substantial faceted lugs. An automatic model, this watch is powered by Omega’s excellent calibre 552 with 24 jewels and precision regulation. 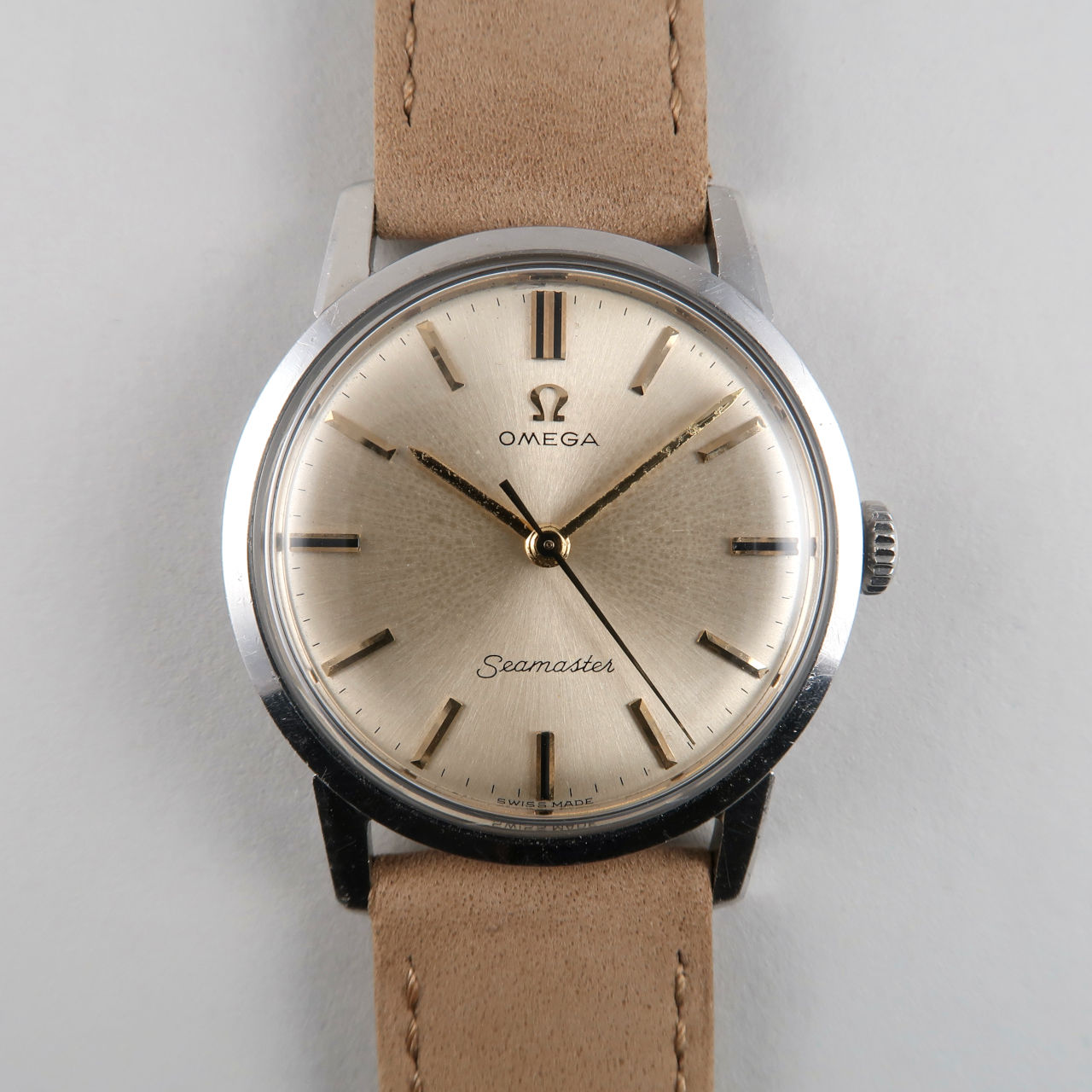 A classic Seamaster model with sharp lines and handsome gold hour indexes, this watch dates to the early 1960s. The steel case has a screw-down back featuring the embossed Seamaster logo. There are scuffs and scratches to the case but the shape of its angles and edges remain well defined; the hands have some oxidation spotting to their surfaces. 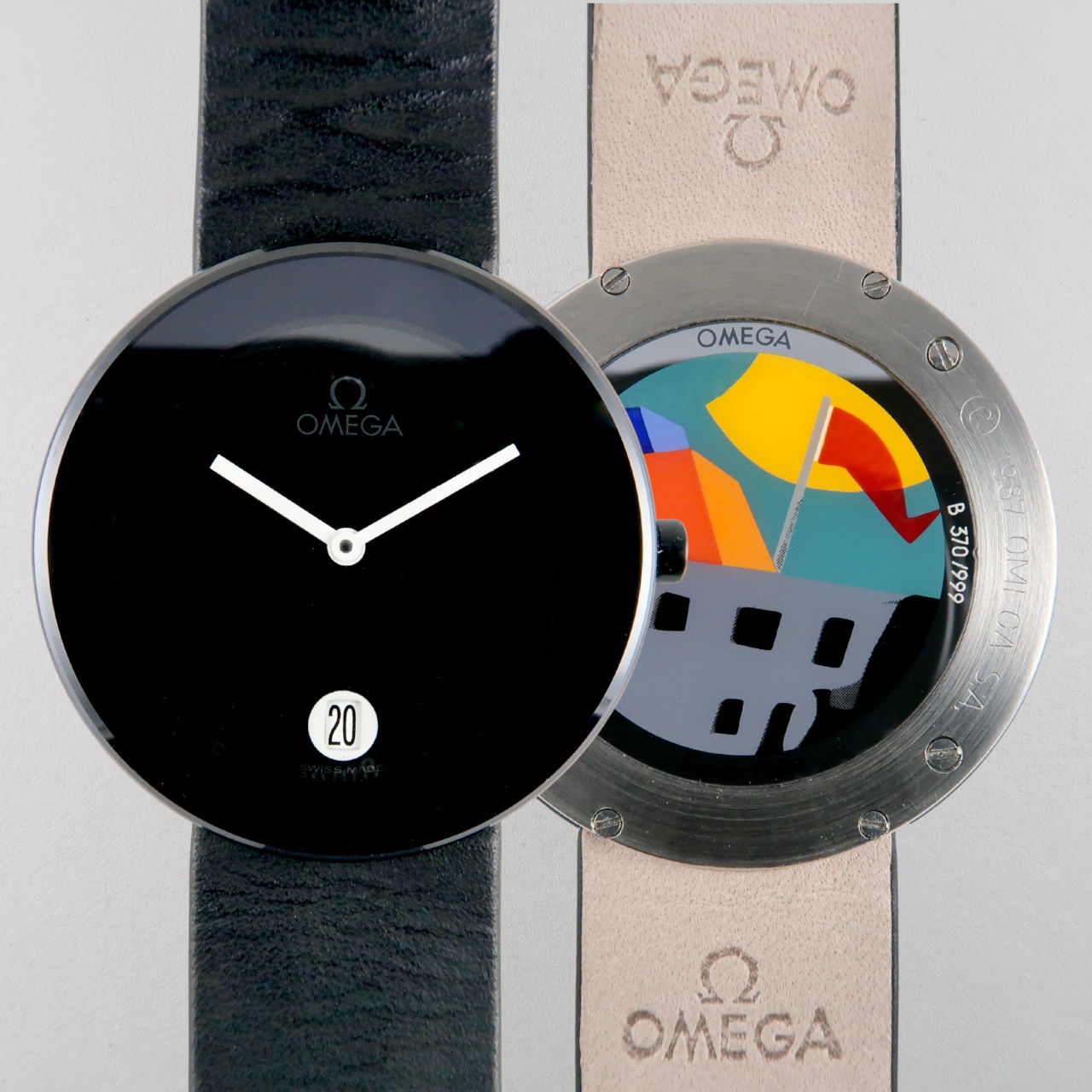 Omega announced their new “Art Collection” watches in October 1986 with the first models officially released in 1987. The project was managed by Ernest Thomke the first CEO of the SME (Société de Microélectronique et d’Horlogerie), later re-named the Swatch Group, of which Omega was a part. Prior to this, in 1980, Thomke had been CEO of ETA and had led the project to develop the Swatch watch. The watch cases for Omega’s “Art Collection” were designed by Hans Zaugg using a new scratch-resistant ceramic alloy. Gerhard Saner, head of Saner Metallisation AG, Studen, designed the artists’ medallion for the case backs. Omega commissioned a variety of artists to produce designs for the medallions, these included: Kenneth Nolan, Valerio Adami, Max Bill, Richard Paul Lohse, Paul Talman, Camille Graeser, Fritz Glarner, Al Held, Arnaldo Pomodoro and Emilio Tadini – the latter being the artist responsible for the medallion on the case back of this watch. A mid-sized model, the monochromatic colouring of the upper case dramatically contrasts with the colourful art medallion to the back and the watch is fitted with an original special edition Omega strap with blackened metal pin buckle.

You can sign up HERE to automatically receive these updates via email or navigate to the ‘Subscribe‘ tab.