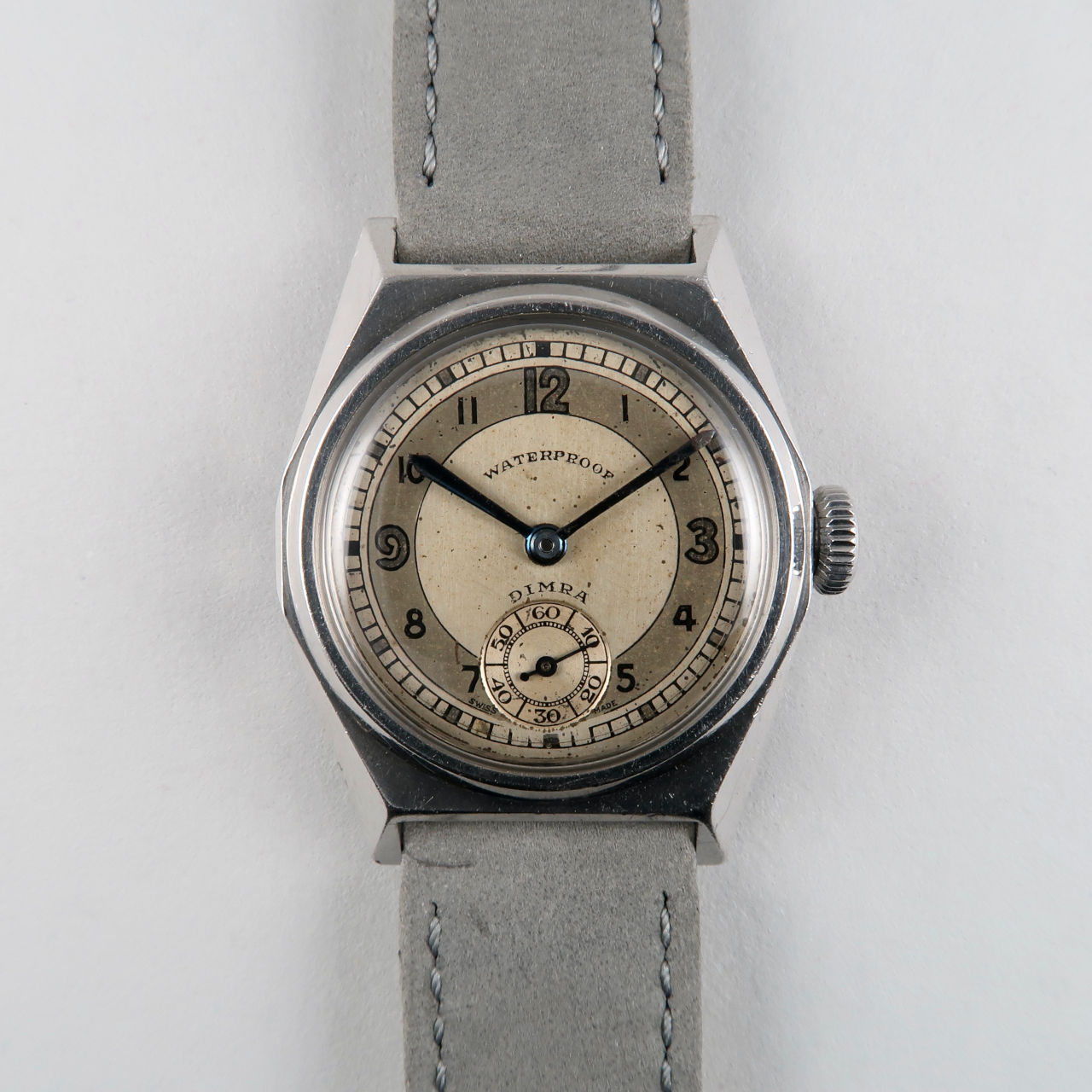 Kicking things off this week is a wonderfully charismatic mid-sized wristwatch by Dimra. The steel case is particularly pleasing with its multiple angles and facets and is an early waterproof design made for Dimra by one of the finest vintage case makers, Taubert & Fils. From the late 19th Century, when it existed under the name Frères Borgel, Taubert & Fils was one of the finest Geneva based case makers and specialists in the manufacture of high quality dirt and moisture-resistant cases. The company’s case stamp is F.B. within a cartouche. Borgel cases are of exceptional quality and were used by some of the finest makers, including Patek Philippe, for whom Taubert famously supplied the screw-back case for the chronograph reference, 1463. 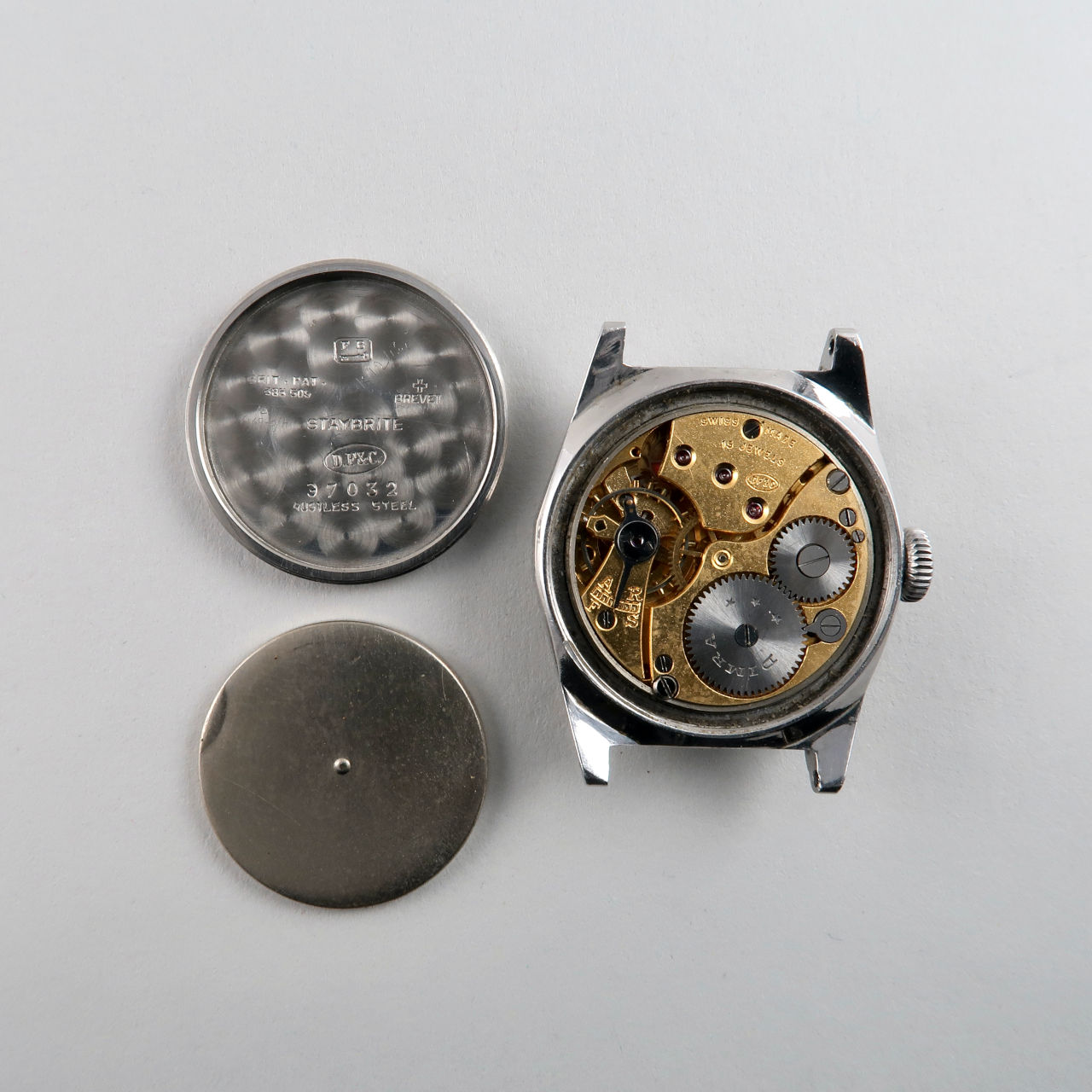 With a two-tone finish, the silvered dial is highly detailed and heavily influenced by the Art Deco movement. The outer minute ring and the chapter ring for the hours are linked in design. As you follow the minute ring, the squares at each 5-minute division are black at the quarters and mirror-finished in between, while the chapter ring has mirror-finished hours at 12, 3 and 9 and black Arabic numerals at the intervening hours. This gives contrast stepping from mirror finishing to black, right around the dial which further enhances the dial’s two-tone appearance. 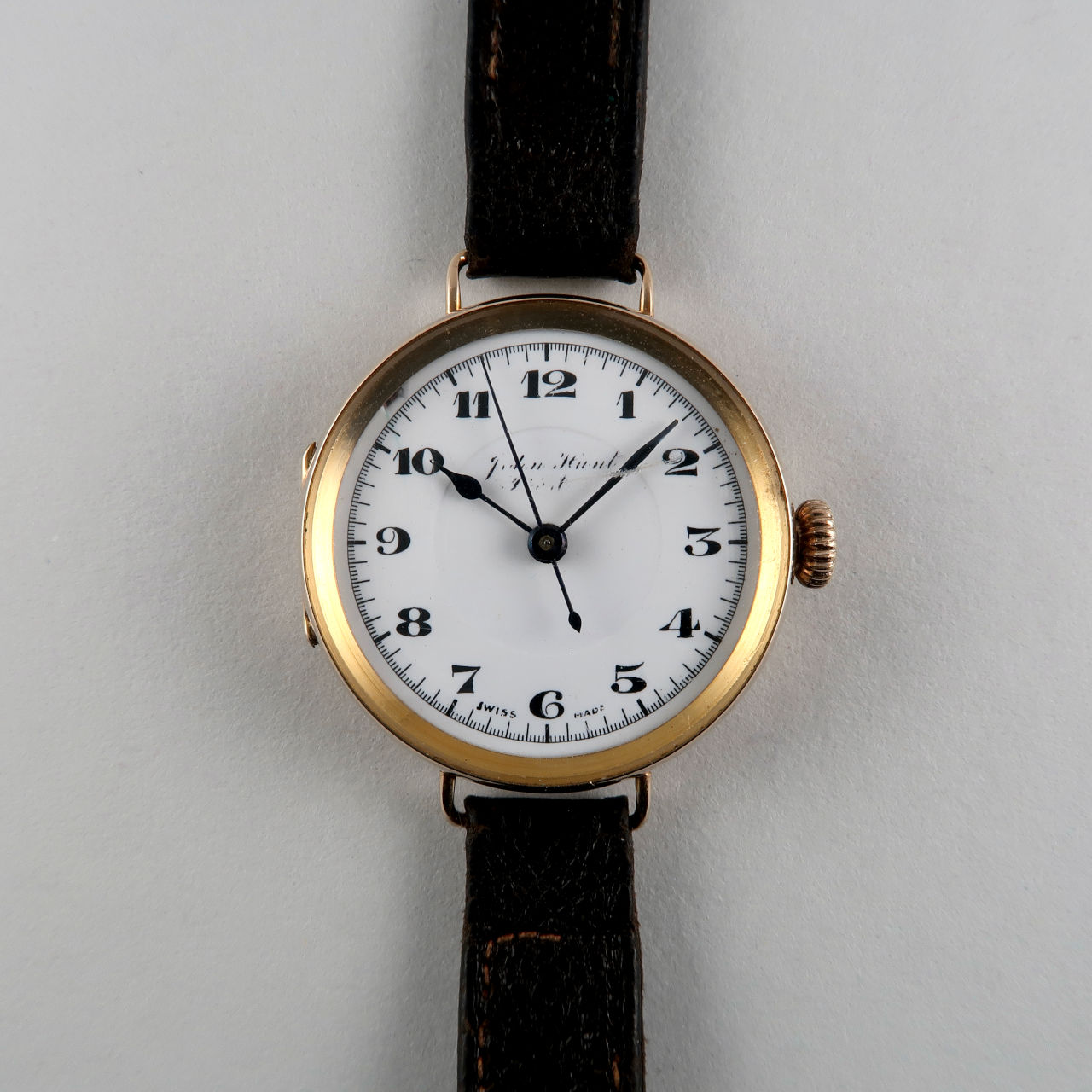 This is a rare and early gold lady’s wristwatch with a white enamel dial and original gold buckle. It is particularly unusual to find watches from this period with a centre seconds – the majority of early wristwatches had either subsidiary or no seconds. The white enamel dial is handsomely designed with a sunken centre and outer tracking calibrated for 1/5 second increments. Signed by the retailer, John Hunt of Bristol, there is some wear to the dial’s signature. There is a chip to the enamel at the edge between 10 and 11 o’clock; a hairline crack from the chip runs just below the numeral at 10 o’clock. 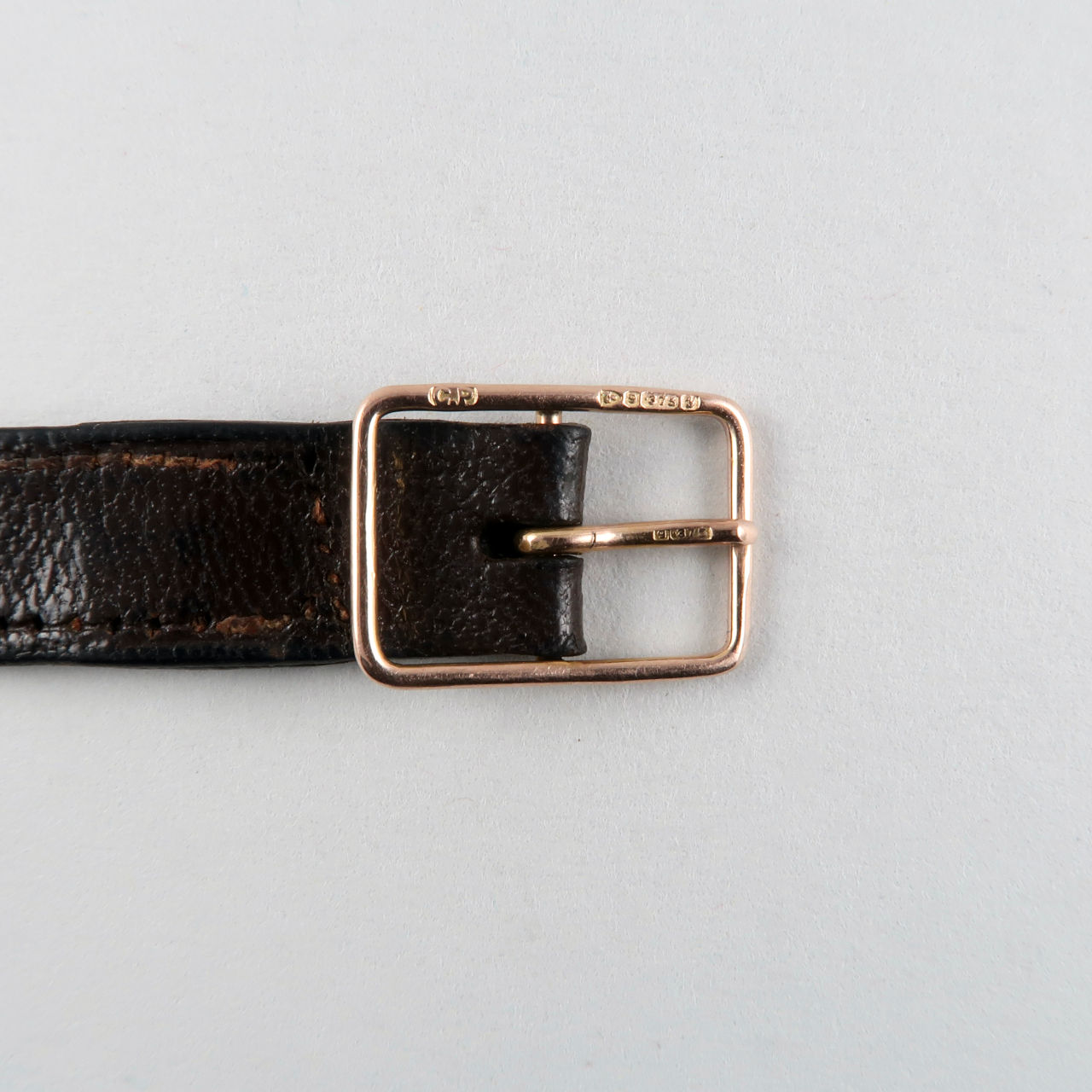 Also notable is the stitched leather strap which is fitted with a very early 9ct pink gold pin buckle. The buckle is English made and has Chester hallmarks for the year 1923. The case is of early bassine-form retaining its original knurled winding crown, down-turned wire lugs and glass. There are some scratches to the glass, one noticeable to the upper right-hand portion. The case has London import hallmarks for the year 1919-1920 and the stamp of George Stockwell who imported and assayed Swiss made watch cases. 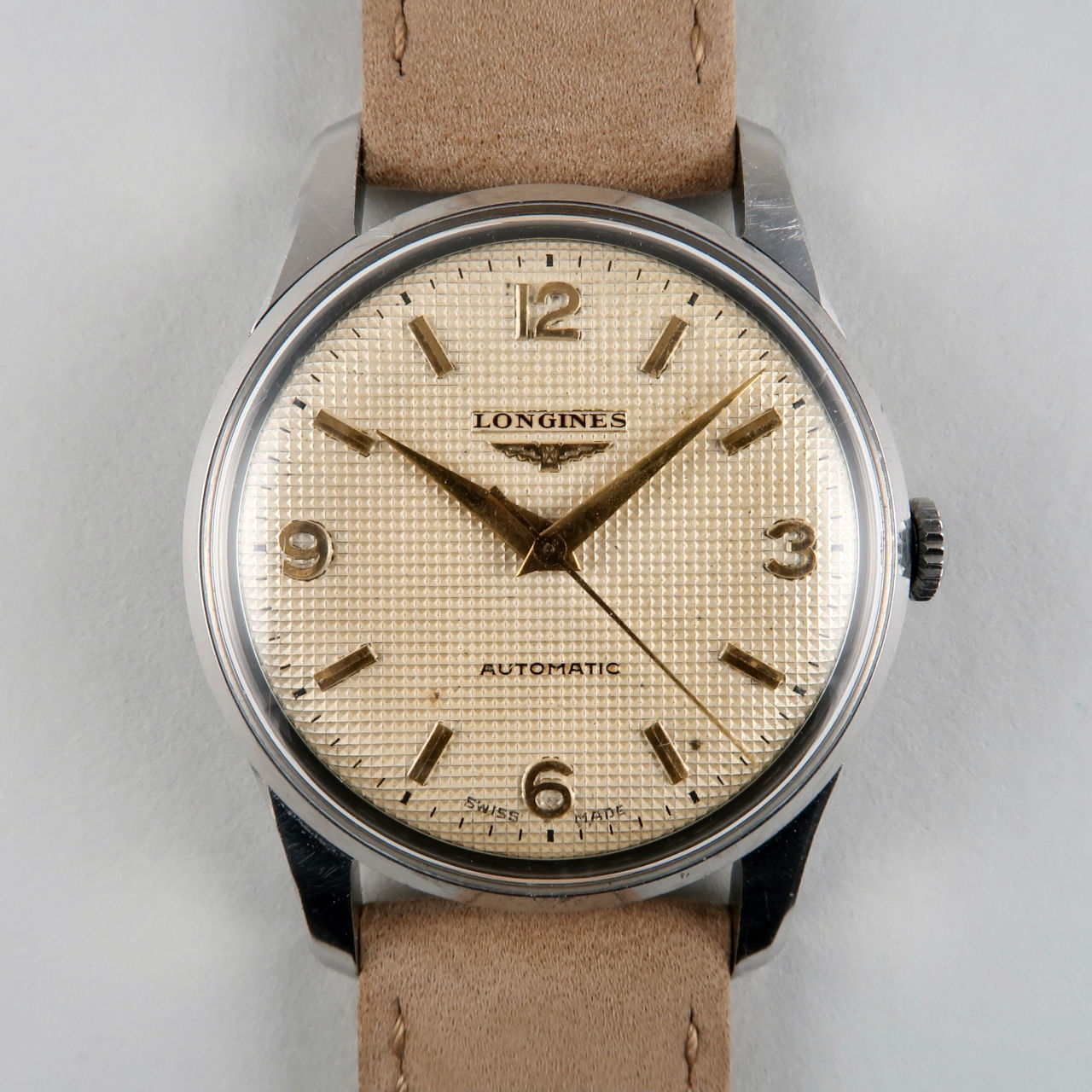 This Longines wristwatch has an unusual honeycomb textured dial with a warm golden tone that is complimented by its gilded hour indexes and dauphine hands. The case is bold and robust with interesting tapering chamfers to the edges of the  lugs. To the case back, an inscription details the watch’s presentation in July 1955. The case appears to be in unpolished condition, retaining crisp detailing and with some light scuffs and scratches.

The Longines Archives confirm that this watch was originally invoiced on 1 April 1955 to the watchmaker’s UK agent, Baume. 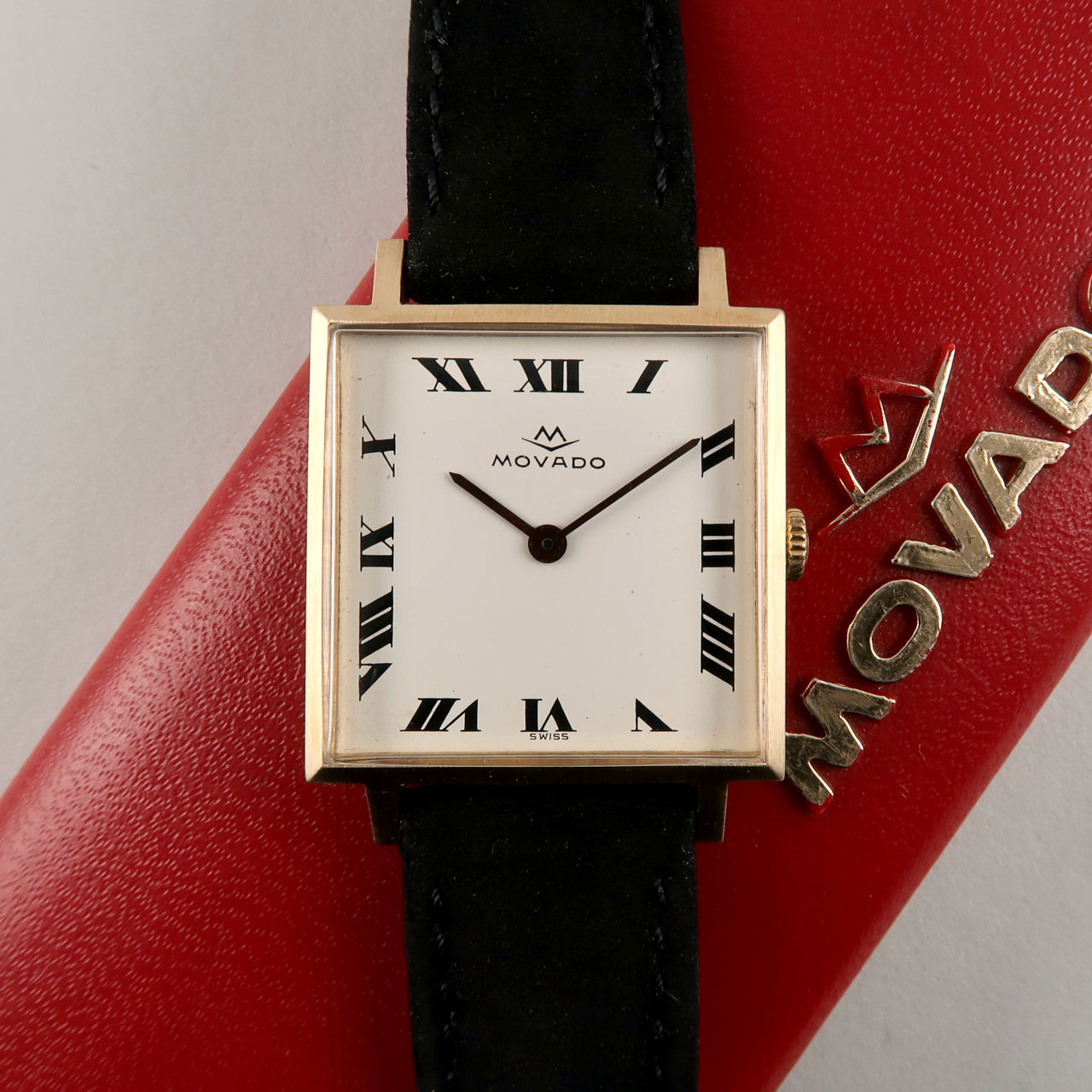 An attractive dress watch, the design of the case and dial is one used by a number of fine watch manufacturers during the mid to late 1960s. In good overall condition, the watch is accompanied by a red Movado plastic presentation case.

Movado’s referencing system was changed a year prior to the production of this watch and the watch’s reference number illustrates the remarkable detail put into each configuration. The first three digits of the reference number refer to the calibre – in this instance cal. 246; the second three (235) refer to the metal and the case shape (23 for 9ct yellow gold and 5 for ‘fancy shape’); the final three refer to the type of crystal 011 (standard or ordinary type). During the 1960s, Movado collaborated with Universal with the watchmakers sharing some movement calibres. The movement in this watch uses Universal’s base calibre 42 which is finished and detailed by Movado – the latter giving it their own calibre designation, number 246. 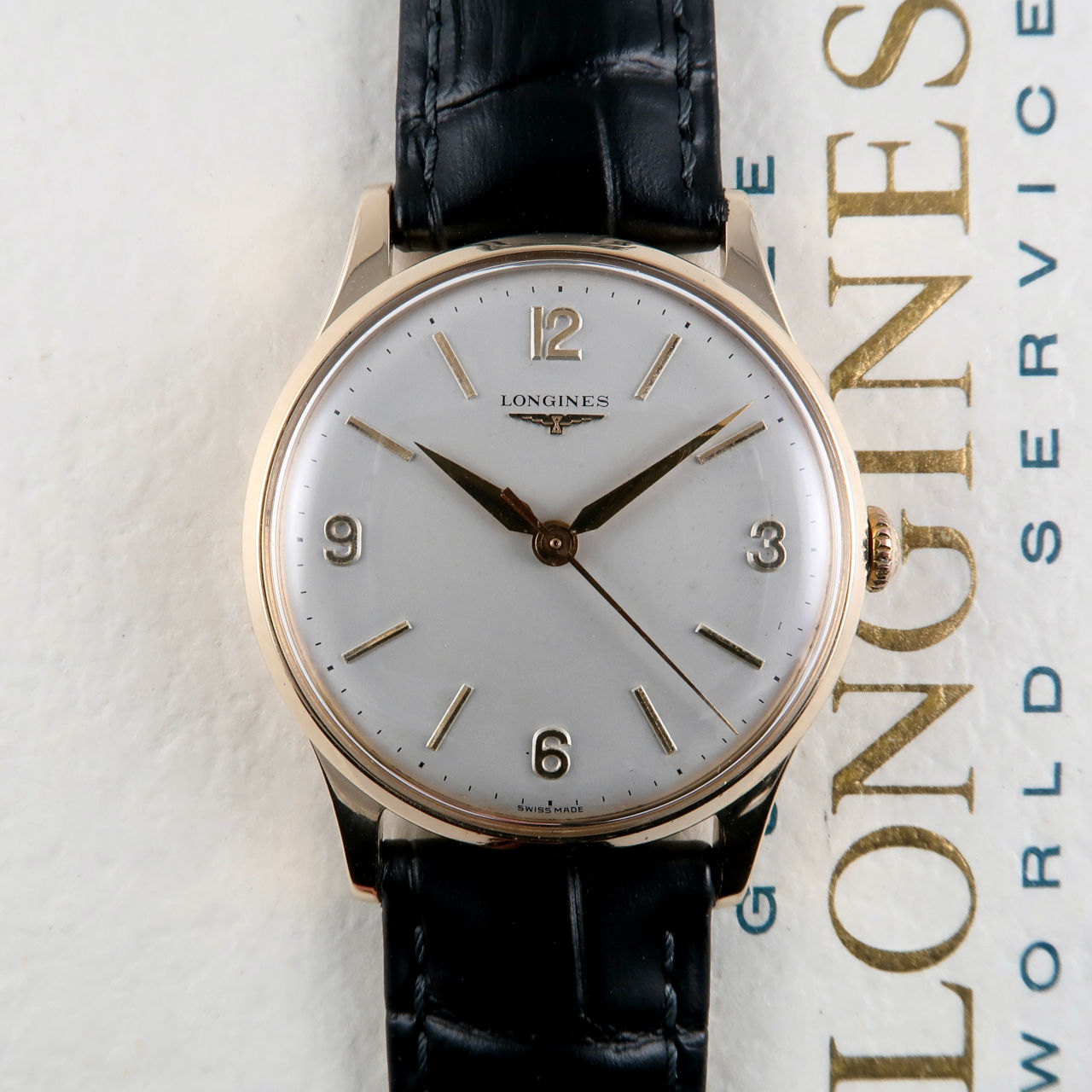 With a classic baton/Arabic numeral configuration, this smart Longines wristwatch has a hand wound calibre 12.68ZS movement. The Longines Archives confirm that the watch was originally invoiced to their UK Agent, Baume, on 21 August 1963.  Baume distributed Longines’ watches to retailers throughout the UK and the accompanying Certificate of Origin shows that the original retailer of this piece was J. A. Jewellers of Hatton Garden. J.A. Jewellers sold the watch to the first owner in December 1963. In addition to the original Longines guarantee booklet, the watch is also accompanied by its fitted Longines presentation case and a Certificate of Insurance issued by J. A. Jewellers at the original time of the watch’s sale. 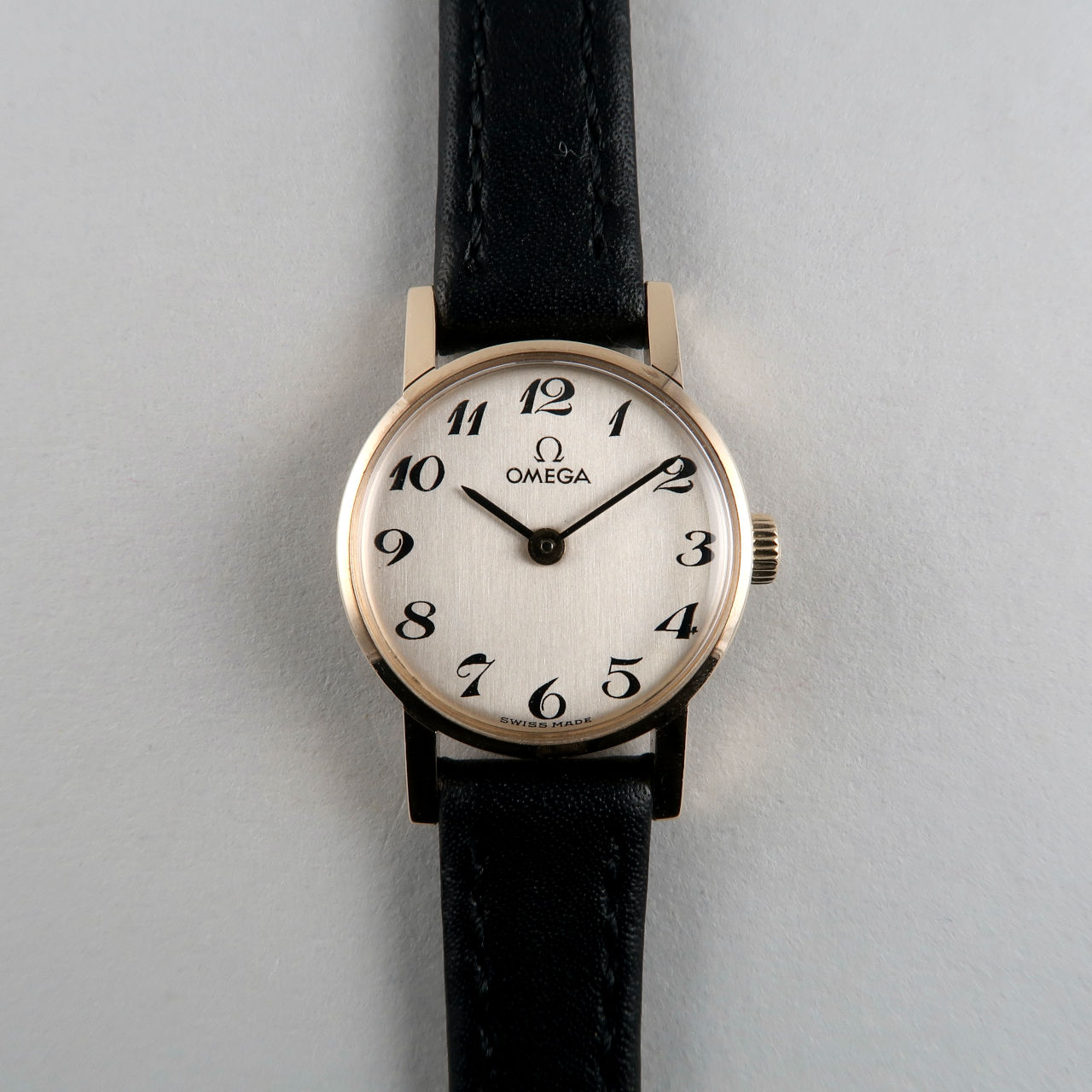 Dating to 1977, this small sized lady’s wristwatch has a silvered dial that is unusually configured with black Breguet-style Arabic numerals. Cased in 9ct gold, the watch houses a hand wound Omega calibre 625. 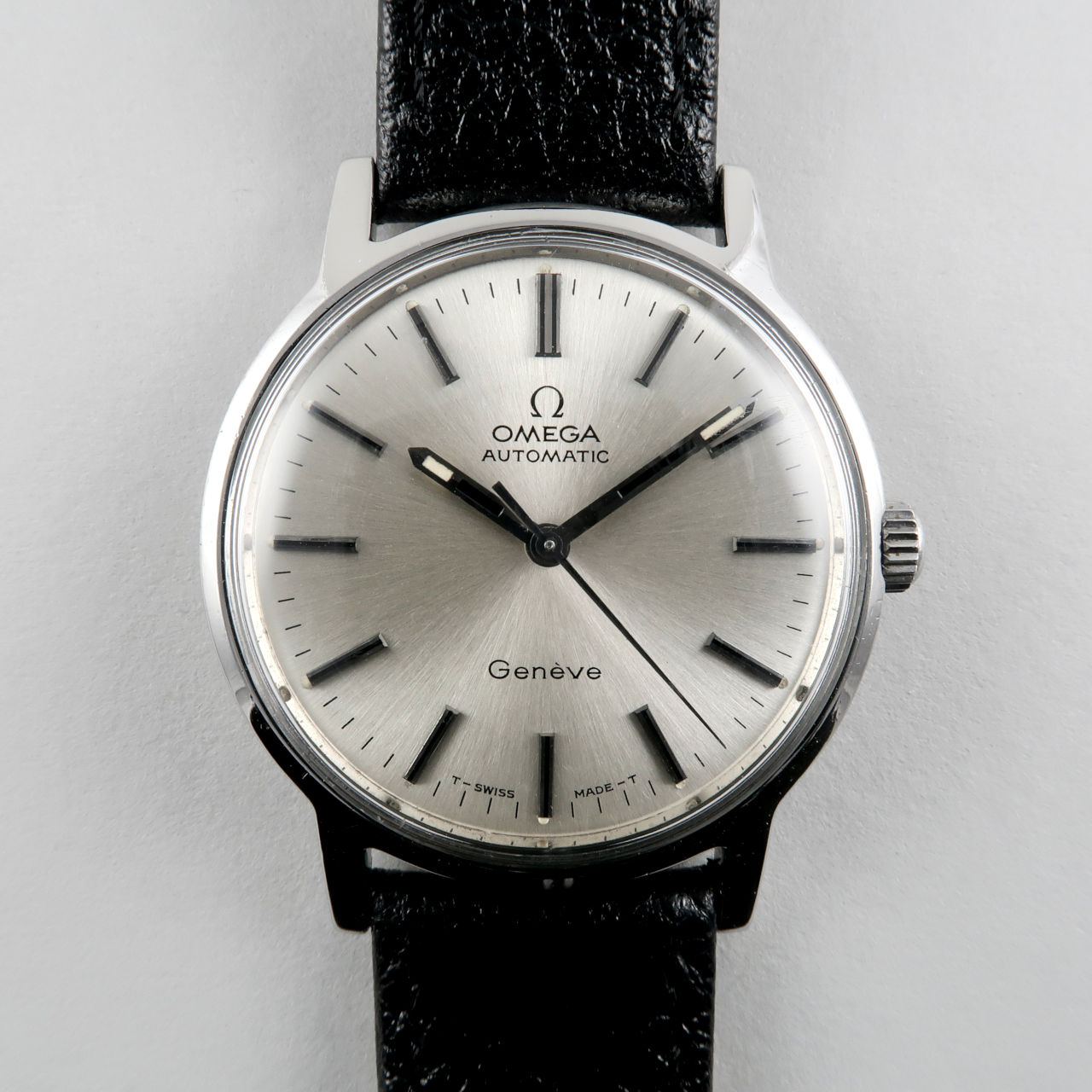 First introduced in 1969, Ref. 165.070 has a clean linear design with a two-part case and straight lugs. The silvered dial has a satin finish and the applied hour indexes have black inserts to their centres to increase visibility. The watch retains its original signed crystal and crown and the case has been re-polished. 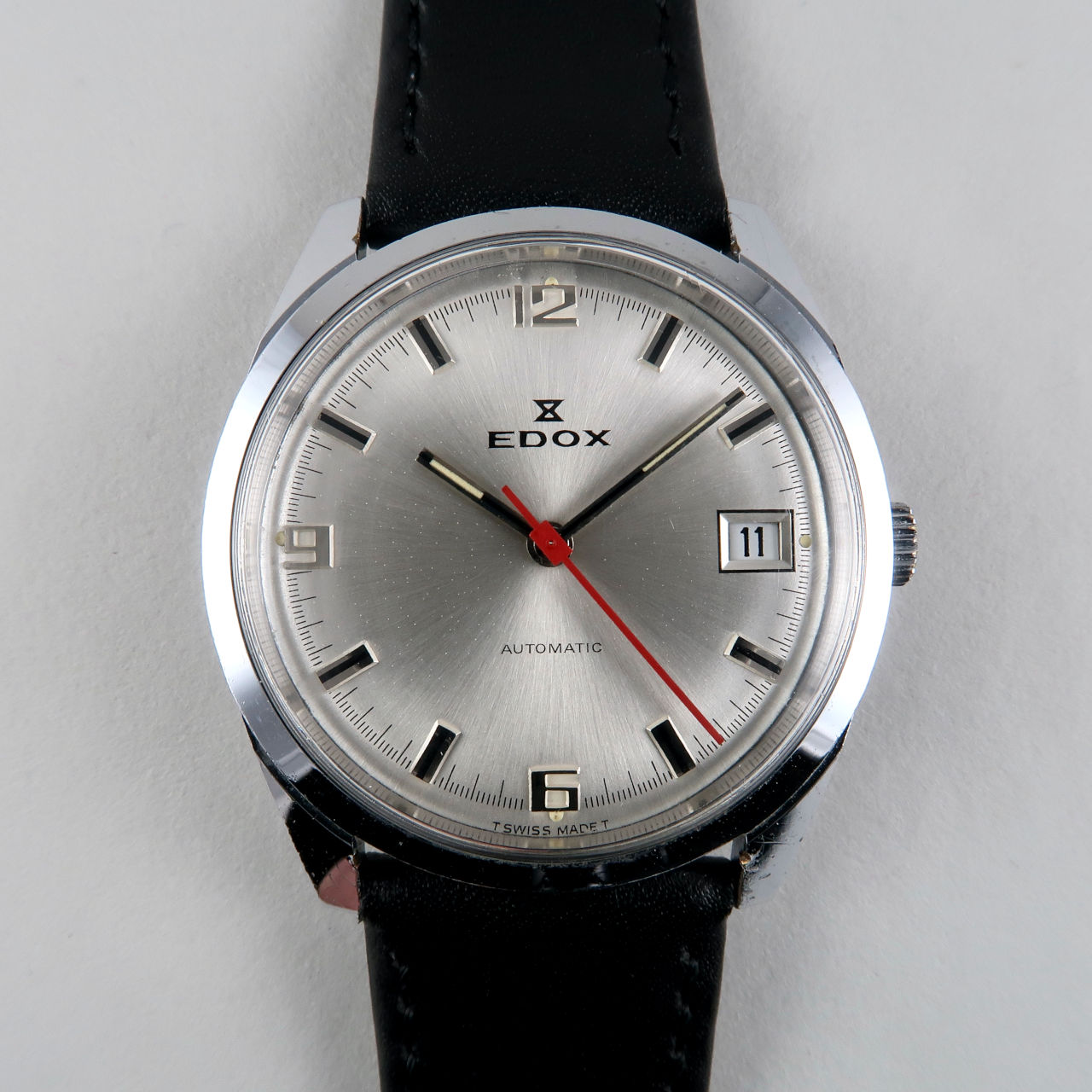 Dating to the mid-1970s, this Edox wristwatch has a bright silvered dial with block-style Arabic and baton indexes. The red centre seconds hand provides an interesting accent and has an unusual rectangular boss to its centre. Automatically wound, the watch is powered by a 17 jewel AS automatic calibre.

Edox were part of the General Watch Company and were assimilated by ASUAG (the world’s largest producer of watch parts and movements) in 1971.

To automatically receive these updates via email please select the ‘Subscribe‘ button at the bottom of any of our web pages.