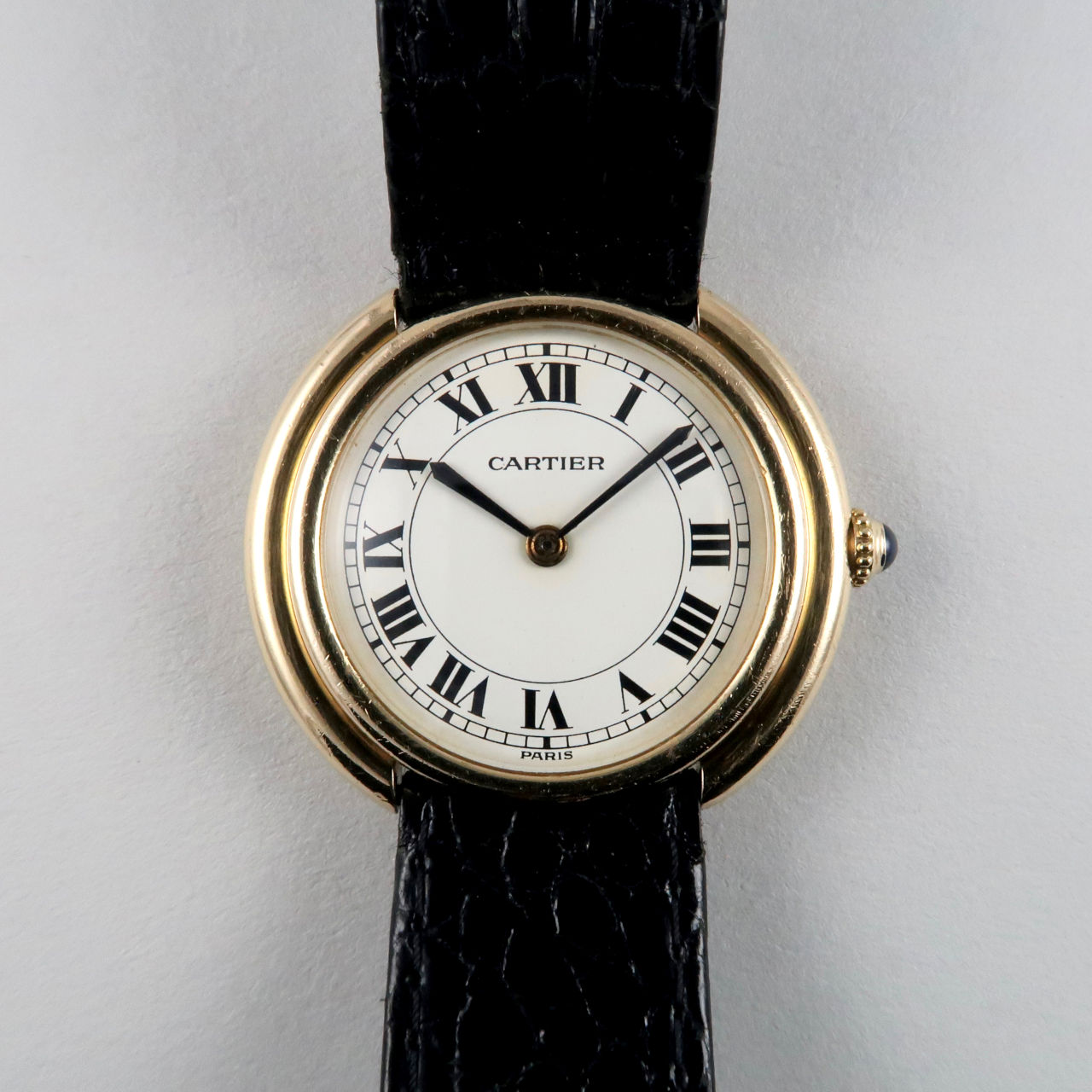 This week’s newsletter begins with a 1974 Cartier Vendôme. The Vendôme is a very attractively designed wristwatch that was made in both manually wound and, as in this instance, automatic versions. Cased in 18ct yellow gold, the colouring is rich and warm in tone and the design dispenses with the traditional arrangement of extended lugs, thereby allowing the pure circle of the case to be interrupted only by the ends of the strap. The white dial is a signature Cartier configuration with black Roman numerals and sword shaped hands. The watch retains its original 18ct yellow gold Cartier deployant buckle which, like the watch case, has London import hallmarks for 1974 – the buckle is fitted to a black leather Cartier strap. 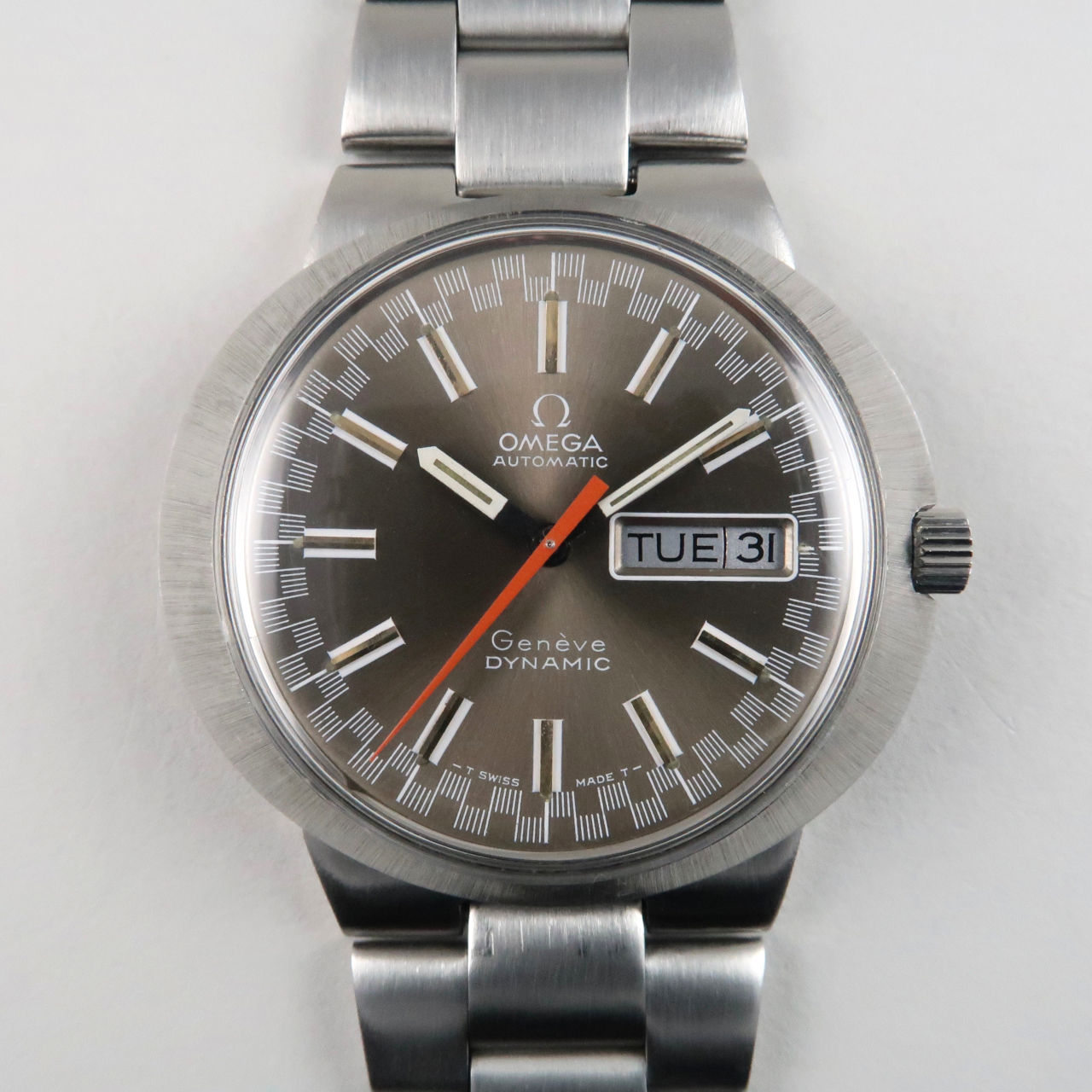 The Omega Dynamic was produced in a variety of styles, including manual and automatic, date and non-date versions. The Dynamic with day and date indication appears far less frequently than standard versions of the model and this example has a particularly rare and attractive metallic grey dial with satin finish. The outer tracking for minutes/seconds is finished in a ‘racing’ style and calibrated to fifths. Also unusual is the numeral configuration which consists of faceted metal baton indexes which are applied over a printed white ‘highlight’ border.  Automatically wound via the calibre 752, the day and date will advance each day at midnight, however, the watch also has provision for quick date change via a secondary crown setting, pulling the crown out to its second position causes the date to advance forwards; the days of the week are advanced by moving the hands through 24-hours. The watch is fitted to its original Omega bracelet. 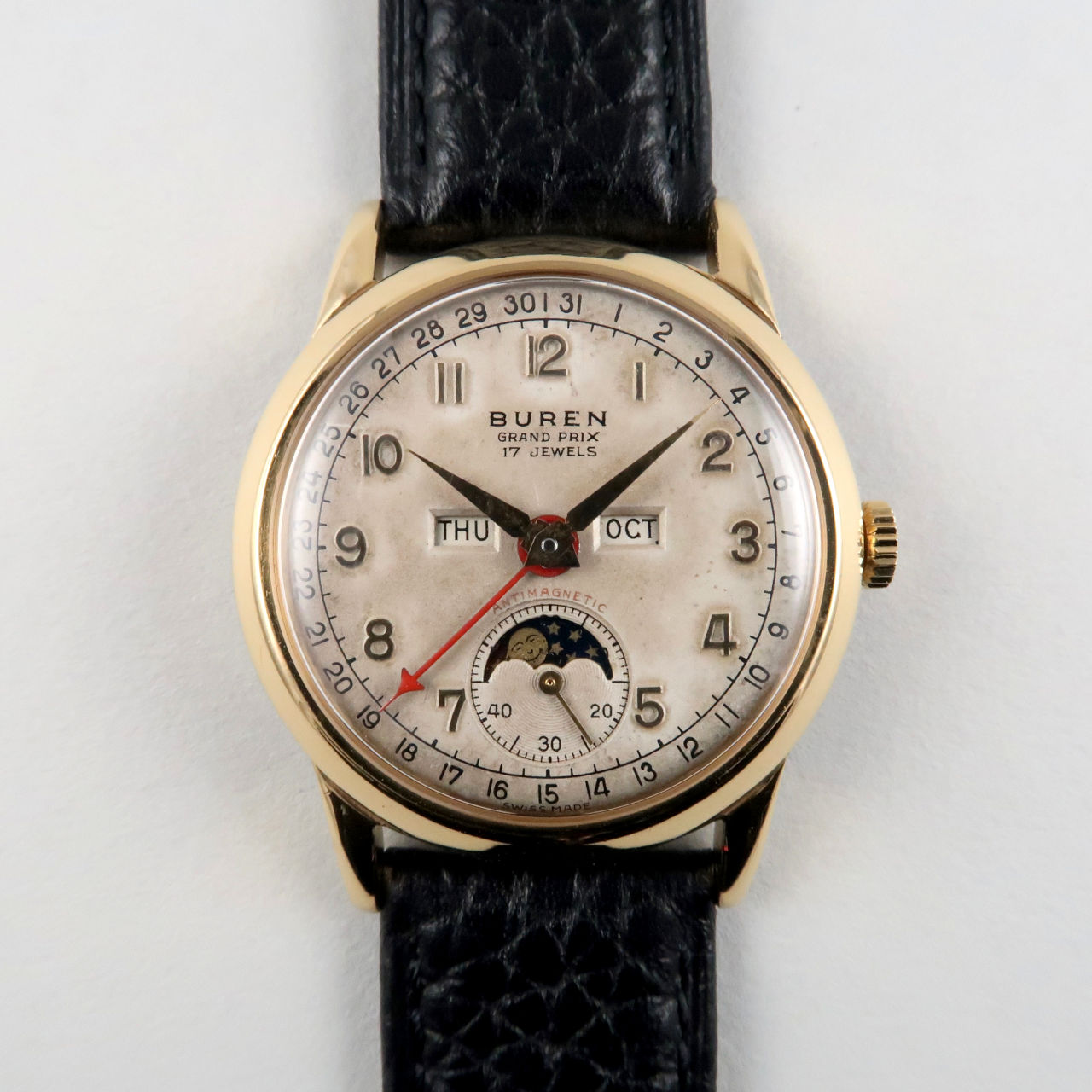 This handsome gold plated and steel triple calendar wristwatch has a warm and evenly patinated dial with clear indications for day, month, date and moon-phases. The watchmaking company of Buren had factories and offices at Buren an der Aare, Chézard and La Chaux de Fonds in Switzerland. At the Barcelona World Fair in 1929, the company won the Grand Prize for their exhibit and for the technical perfection and styling of their watches. Watchmakers were very proud to win such prizes and would often engrave or stamp ‘Grand Prix’ on later production pieces to demonstrate the accolades they had won. In the case of Buren, following the Barcelona Exhibition, the company went on to manufacture a new range of movement calibres which they called their ‘Grand Prix’ series and the movement of this watch belongs to that series. 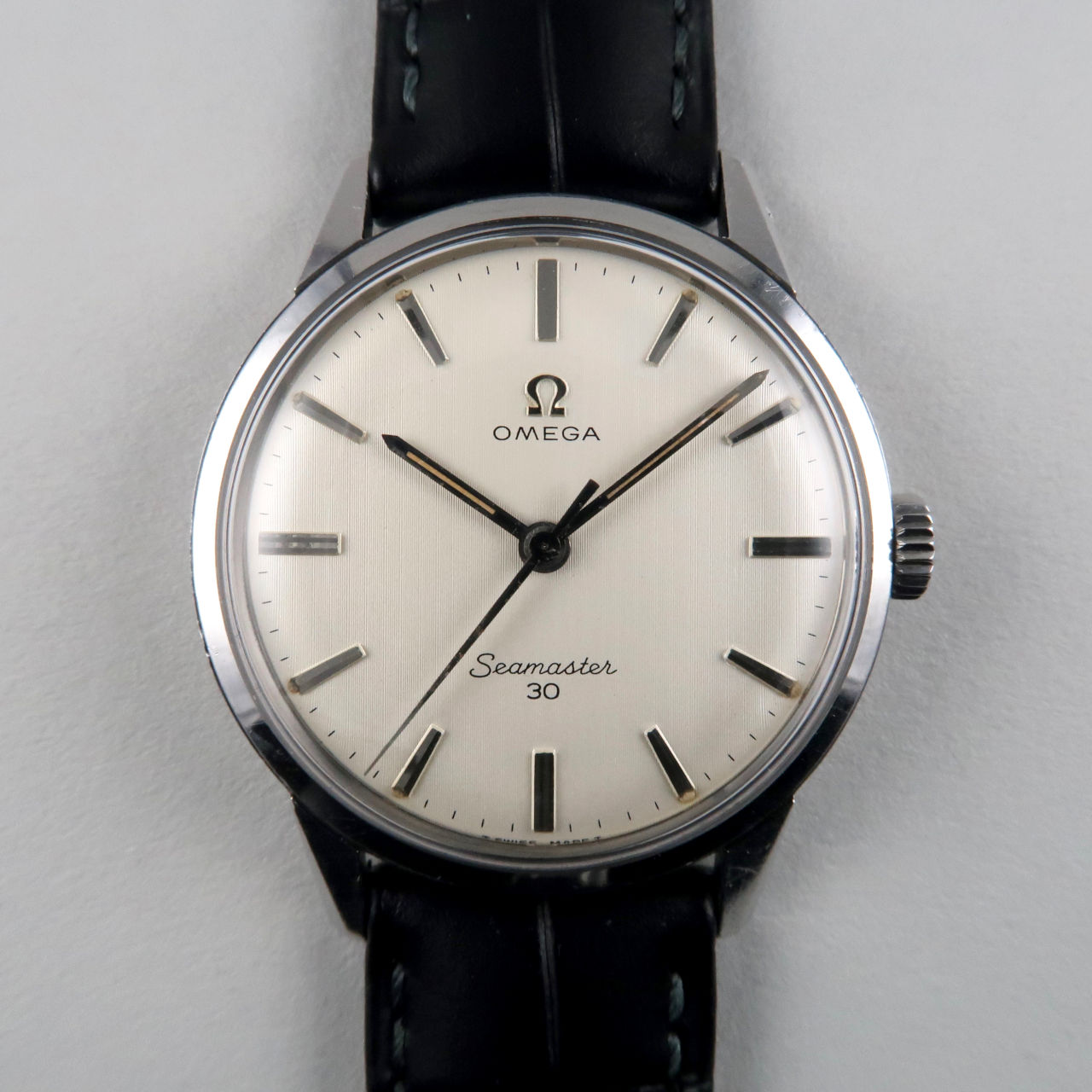 Omega introduced the Seamaster 30 in 1962. This example of the reference has an unusual silvered dial with light, vertical ribbing. Cased in stainless steel, the model has a polished chamfered bezel and faceted lugs. The ’30’ refers to the watch’s movement which is from Omega’s 30 series calibres – these movements had a diameter of 30mm and had gained a reputation for accuracy and reliability. By co-incidence, the Seamaster 30 was also originally water-resistant to 30 metres which has led to much confusion over the derivation of the name. 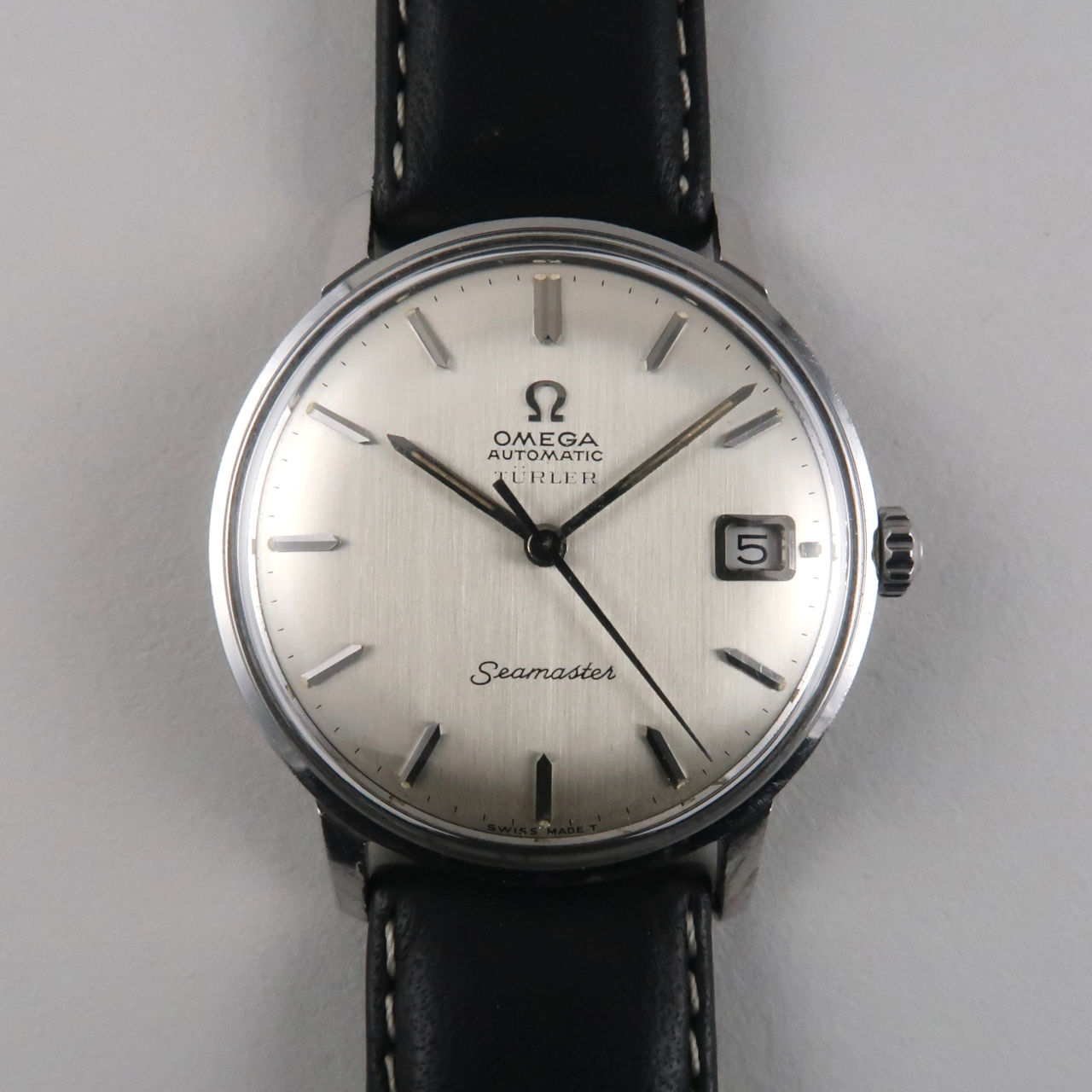 A classic Seamaster model, this reference was first introduced by Omega in 1962 and the present example dates to c.1966. Originally retailed by the prestigious Zurich retailer Türler, the watch’s silvered dial is co-signed by both the maker and retailer and has a light vertical satin finish. Automatically wound via Omega’s calibre 562, there is also provision for semi-quick date change – although the date will change each day at midnight, it may be manually advanced when required by moving the hands backwards and forwards between 9pm and 1am. 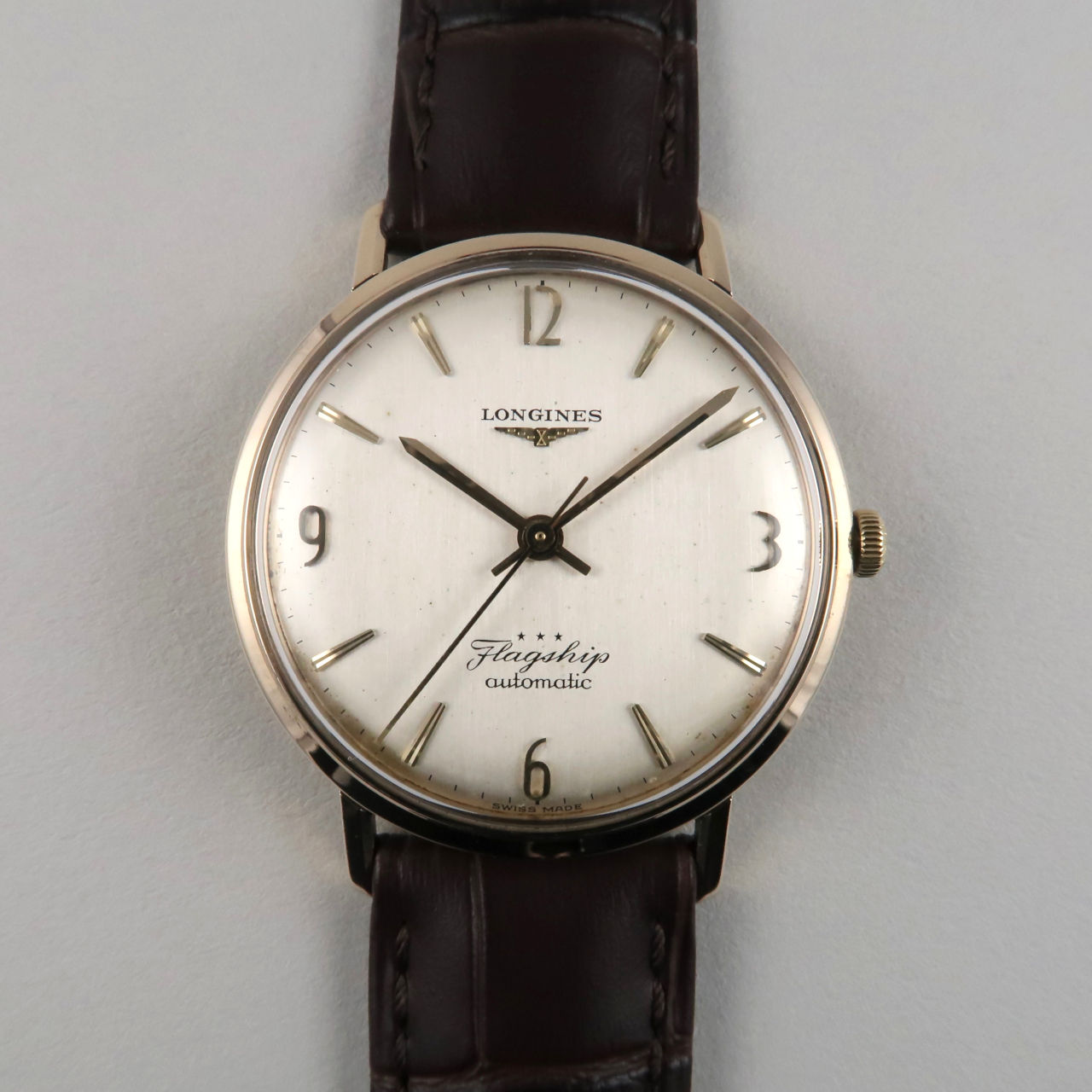 A stylish gold dress watch, this model has a silvered dial with applied gold Arabic and tapered baton indexes. To the outside of the gold case back the watch is chased and engraved with the signature Longines ‘Flagship’ in full sail. The automatic calibre 340 movement is in lovely clean condition. 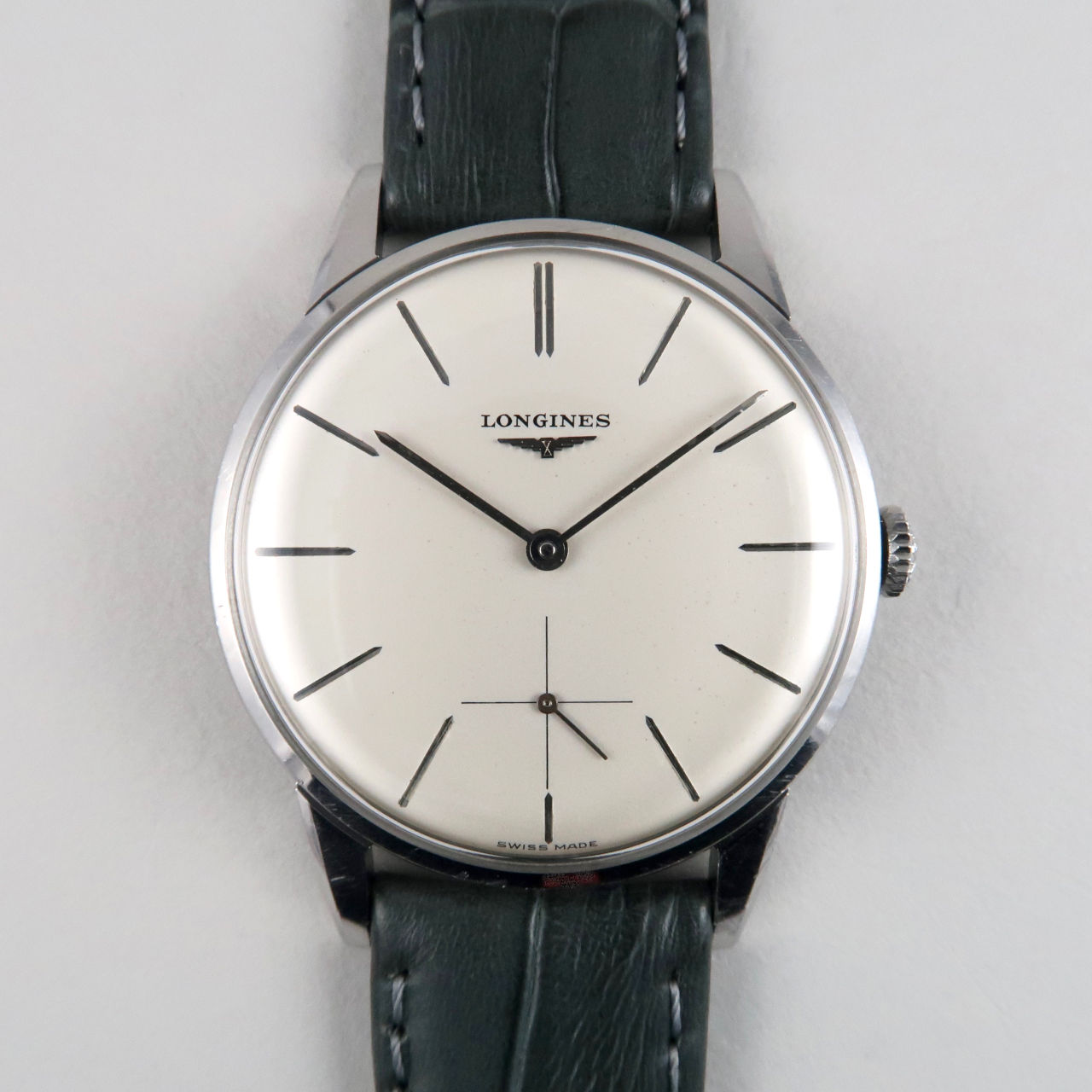 Reference 8888 has a well proportioned case with distinctive facets to the outer edge of the lugs and a faceted, chamfered bezel. This example of the model has inverted faceted baton indexes which are incised into the surface and have a mirror-silver finish. The steel case has not been polished during servicing and retains good definition to its angles and edges, there are light scuffs and scratches from use. The watch retains its original Longines winding crown. 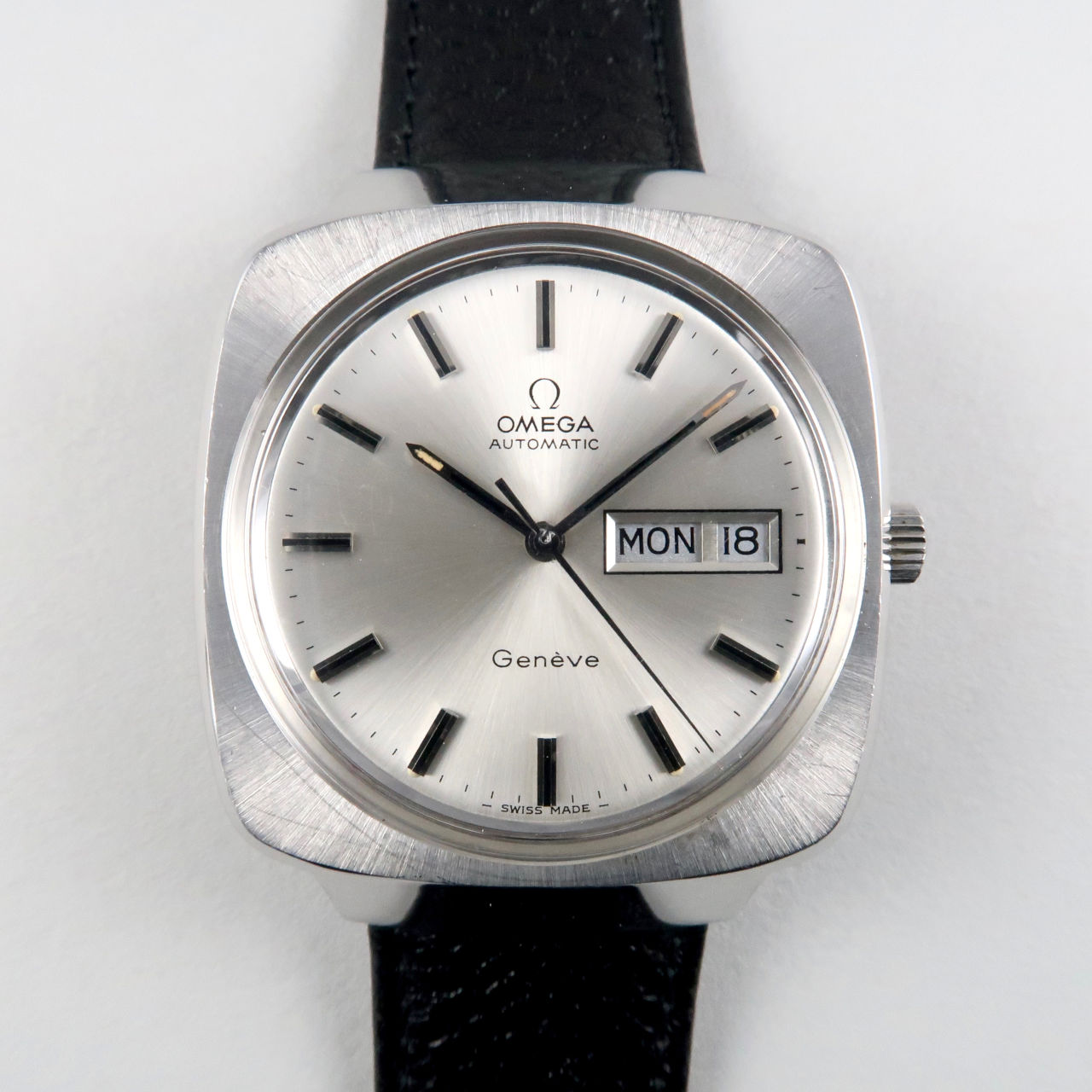 This large sized Omega wristwatch has a substantial cushion form case which incorporates unusual, polished and angled hooded lugs. Automatically wound via the calibre 1022, the crown is equipped with two settings – when the crown is pulled out to its first setting, the date can be moved either forwards or backwards by rolling the crown in either direction; by pulling the crown out to its second setting, the hack feature engages, thereby stopping the seconds hand to allow accurate synchronisation to a time signal, rolling the crown towards the wearer advances the hands, rolling away advances the days of the week in tandem with reverse hand setting. Pushing the crown back towards the case re-activates the seconds hand. 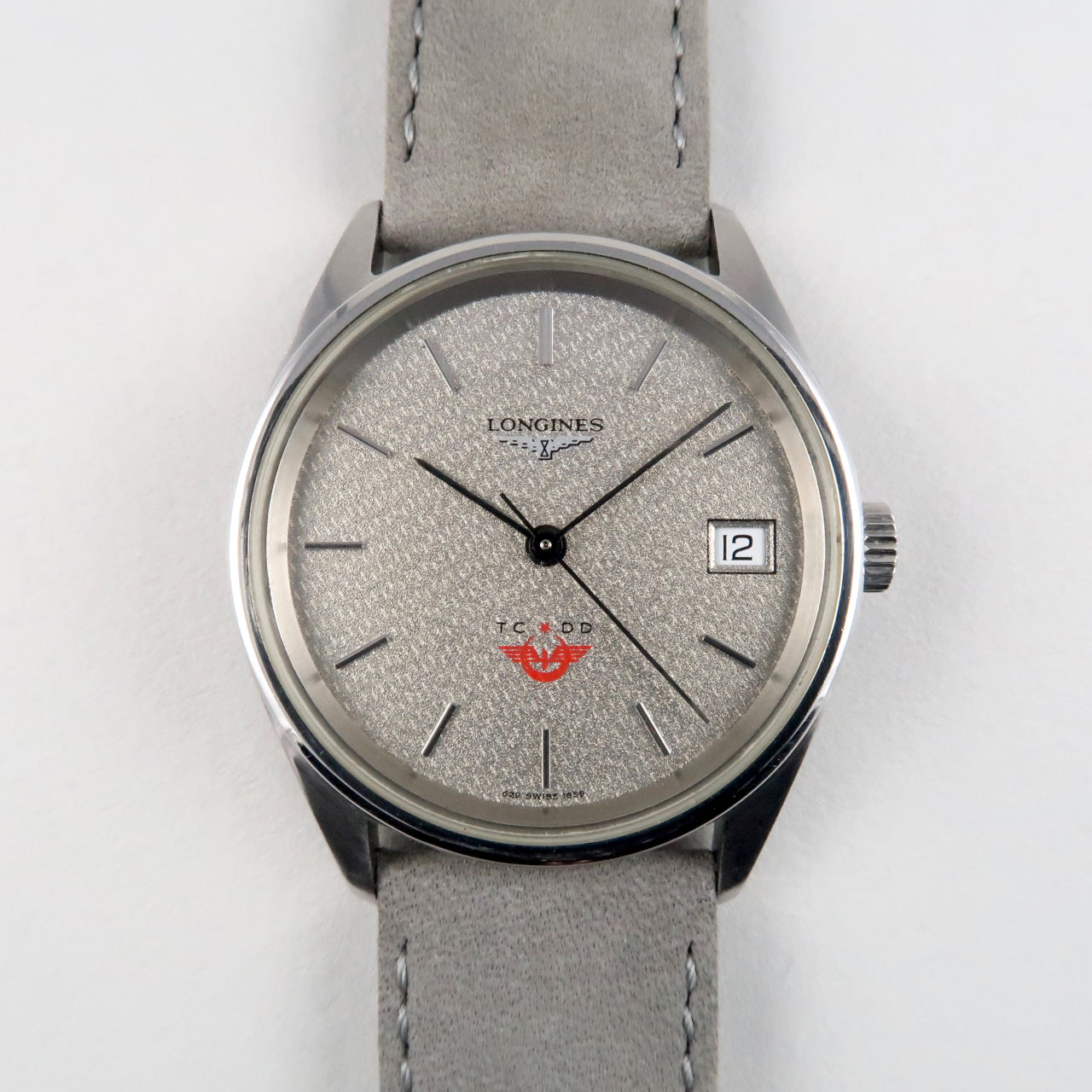 This wristwatch is a Longines model commissioned by the Turkish State Railways (TCDD). The watch has an unusual grey textured dial which is detailed with the Turkish Railways’ logo above the 6 o’clock position. To the edge of the dial below 6 o’clock, the model’s reference number, 1659, is displayed together with Longines’ calibre number, 629. The movement has provision for quick date change via the crown’s first setting; there is also a hack feature which stops the seconds hand when the crown is put into the hand-set position, this allows the watch to be easily synchronised to a time signal. 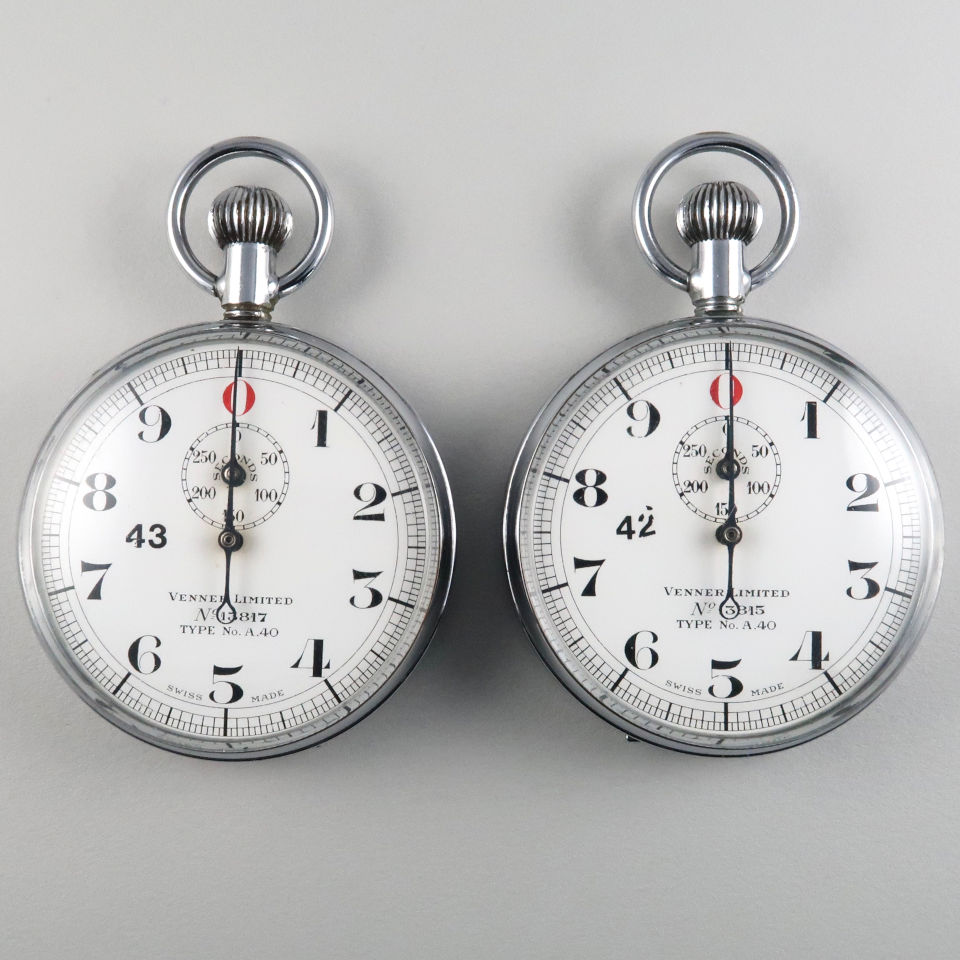 Venner Ltd of New Malden, Surrey were specialists in the manufacture of timers, synchronising clock systems and timing switches. These stop watches were primarily designed for electricity meter testing. They have a pleasing action with a very fast beat escapement. The central seconds hand completes one revolution every 10 seconds and each 10-second interval is recorded on the subsidiary dial at the top of the dial.