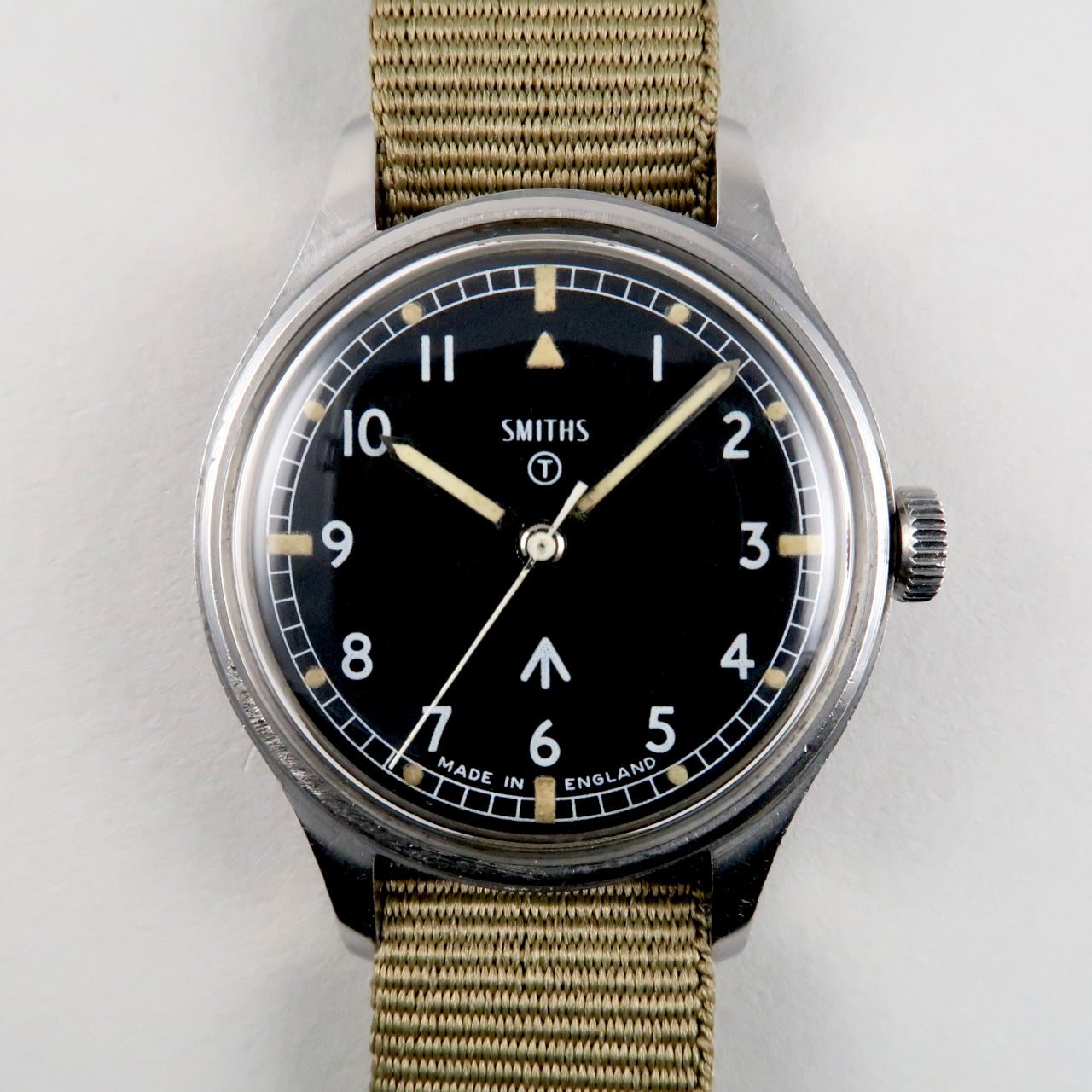 This week’s newsletter opens with a Smiths Military issue W10 wristwatch. The movement is based on the Smiths Astral movement but with exacting specifications and the addition of a hack feature to allow synchronisation of the seconds hand. Aesthetically the styling of the Smiths W10 follows the design precedents established by the WWW watches made by Omega and others (the so-called dirty dozen) that were supplied to the British Military towards the end of the Second World War. The Smiths watch also has a similar design aesthetic to the IWC Mark XI, the latter also features a centre seconds with hack feature (unlike the ‘dirty dozen’ with their subsidiary seconds dials). Like its predecessors, the Smiths watch has a substantial and robust case with screw-down back and a black dial with white Arabic numerals and luminescent accents and hands. The dial of this example is in good condition with handsome colouration to the luminescent indexes and hands. 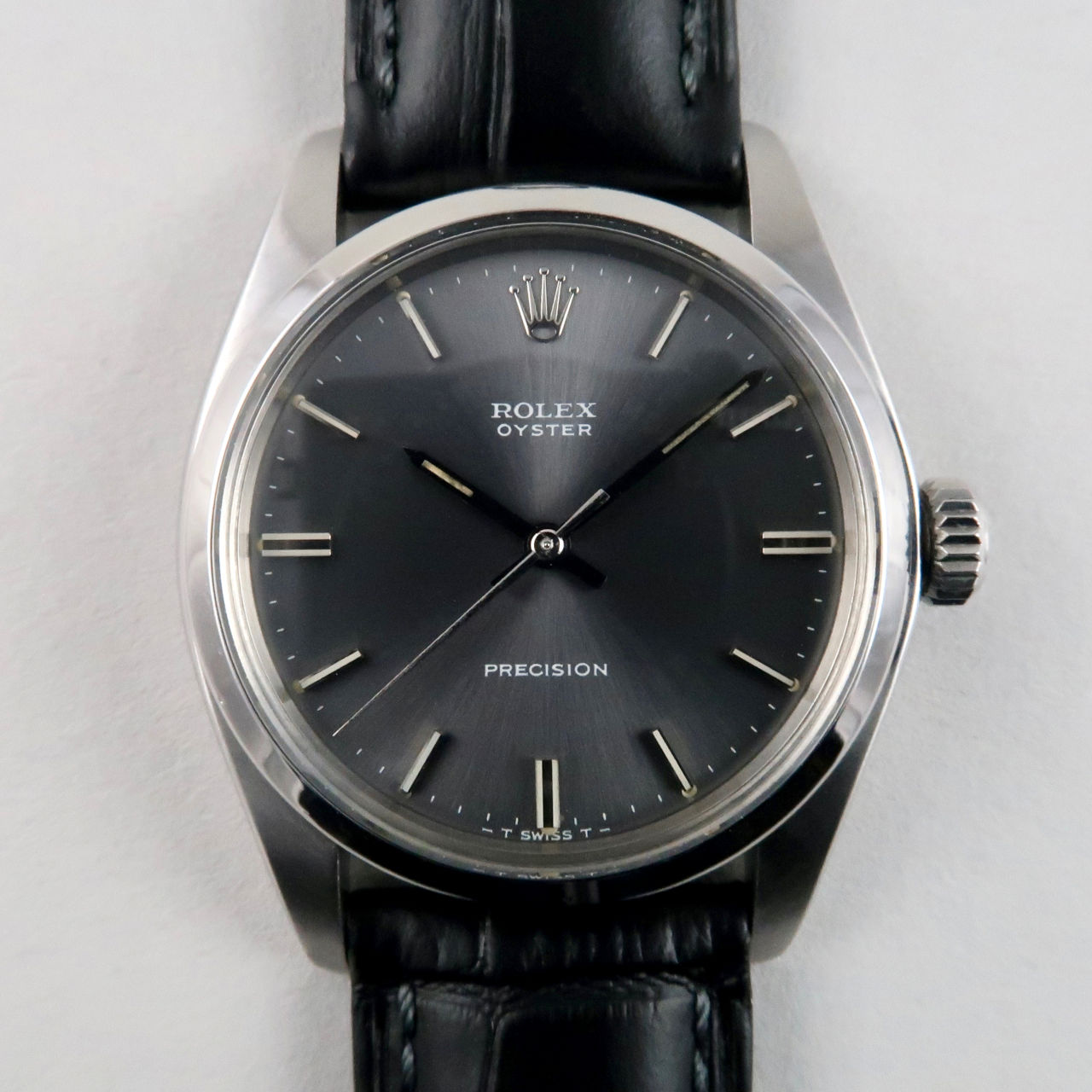 This is a stylish example of the classic, manually wound, Oyster Ref. 6426 which has a case diameter of 35mm. The watch has a grey satin finished dial – a colourway rarely found on this model. The dial is in great condition with a strong and rich tone. The stainless steel Rolex Oyster case has a smooth chamfered bezel and typical screw-down crown and case back. The 3.7 million serial number to the Oyster case dates the watch to circa 1974. 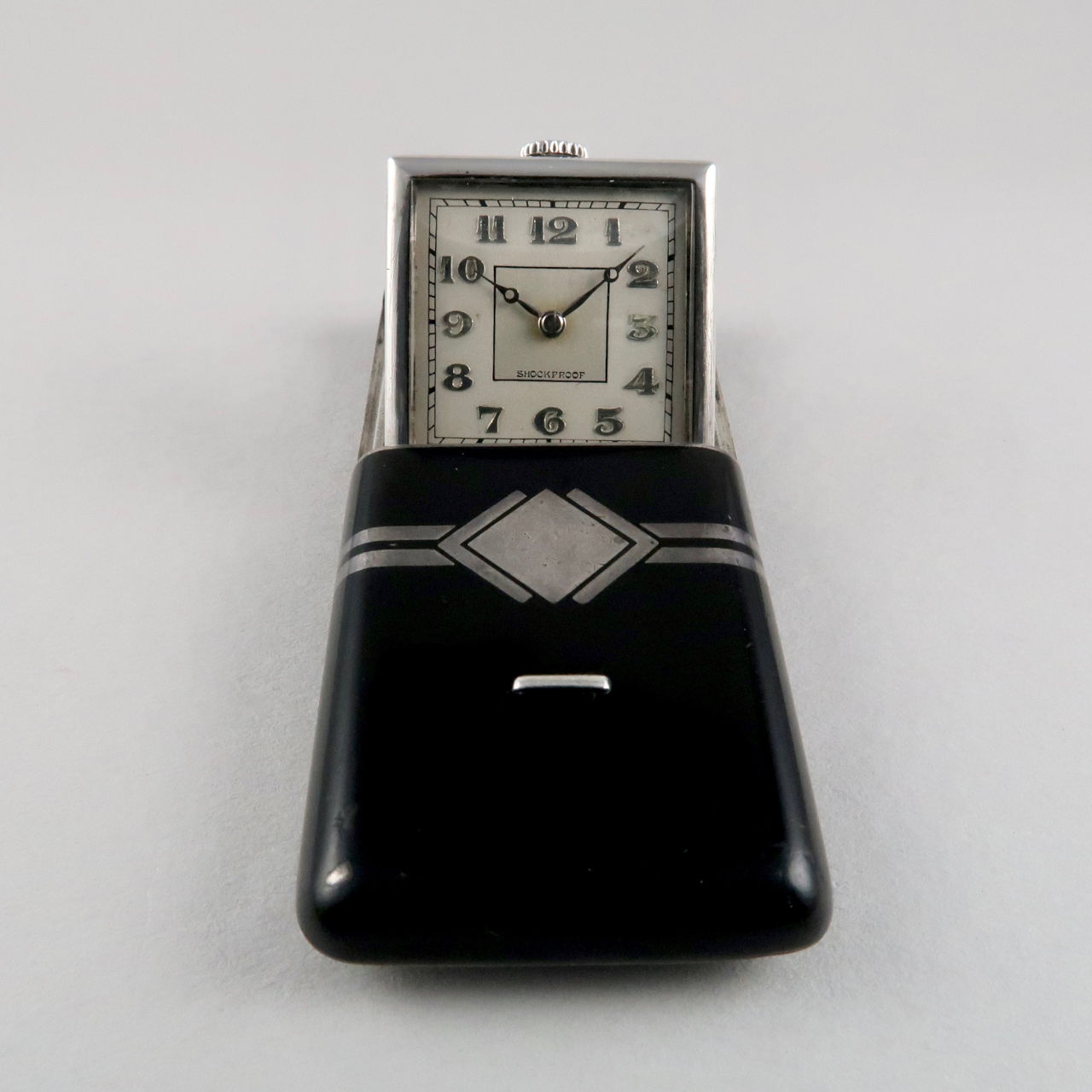 Made in 1931, this purse watch has an Art Deco designed case. The sterling silver body is covered with black lacquer to the front and back, whilst a silver losenge-shaped motif and bands are arranged at the opening to the front cover. The cover slides backwards to reveal the dial which springs upwards when opened, making it an ideal travelling timepiece and one which may be stowed in a pocket or placed on a desk or bedside table. The dial is in good condition with strong two-toning, the case has some rubbing to the lacquer at the corners but is otherwise in good condition. 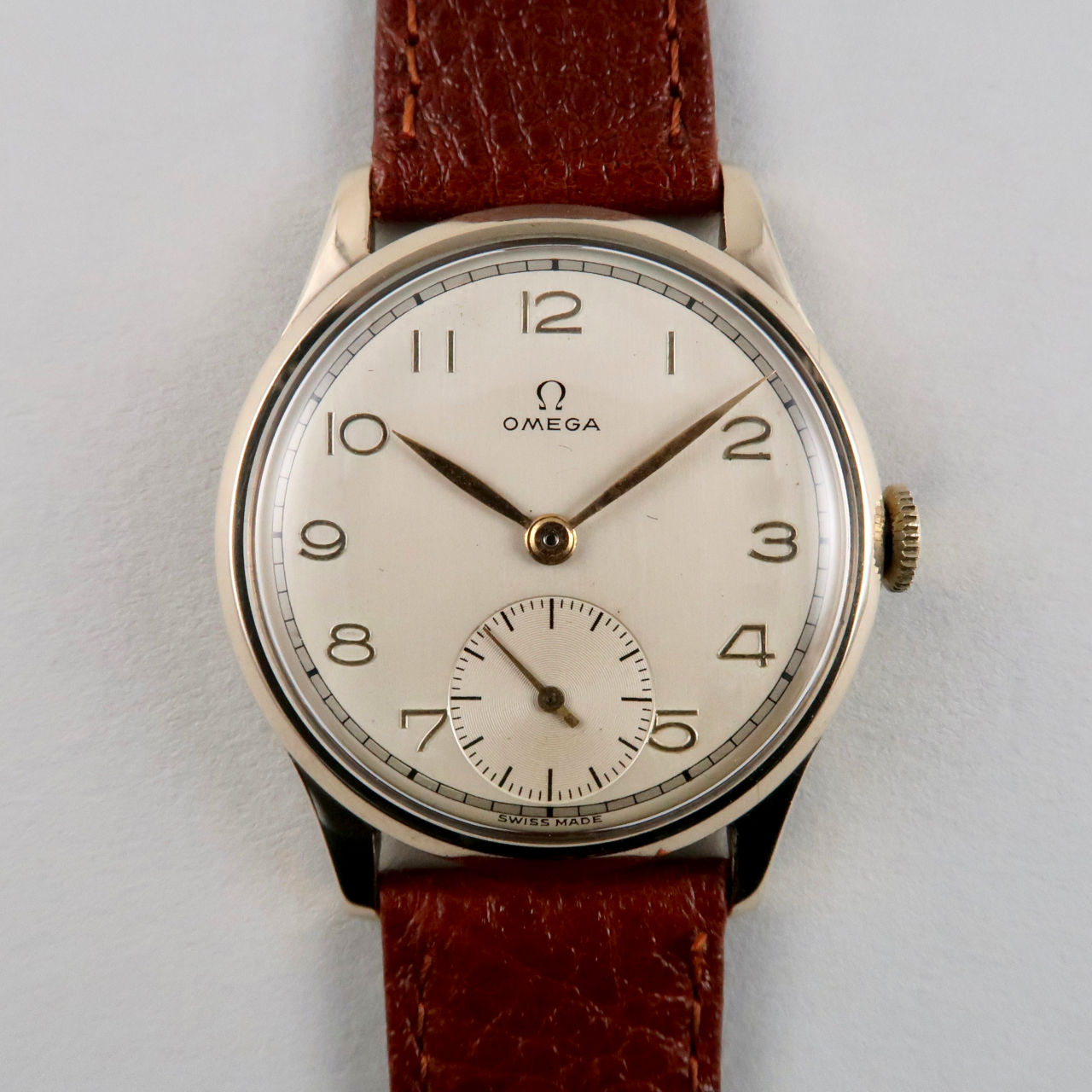 An early example of the Ref. 920, this watch comes directly from the original owner’s family. The silvered two-tone dial is in excellent condition with slim raised Arabic numerals and a ‘rail track’ style minute ring which has a distinctive, higher sheen finish that contrasts with the silk matt surface of the main dial body. The gilded hands are typically styled for the period in a leaf shape. 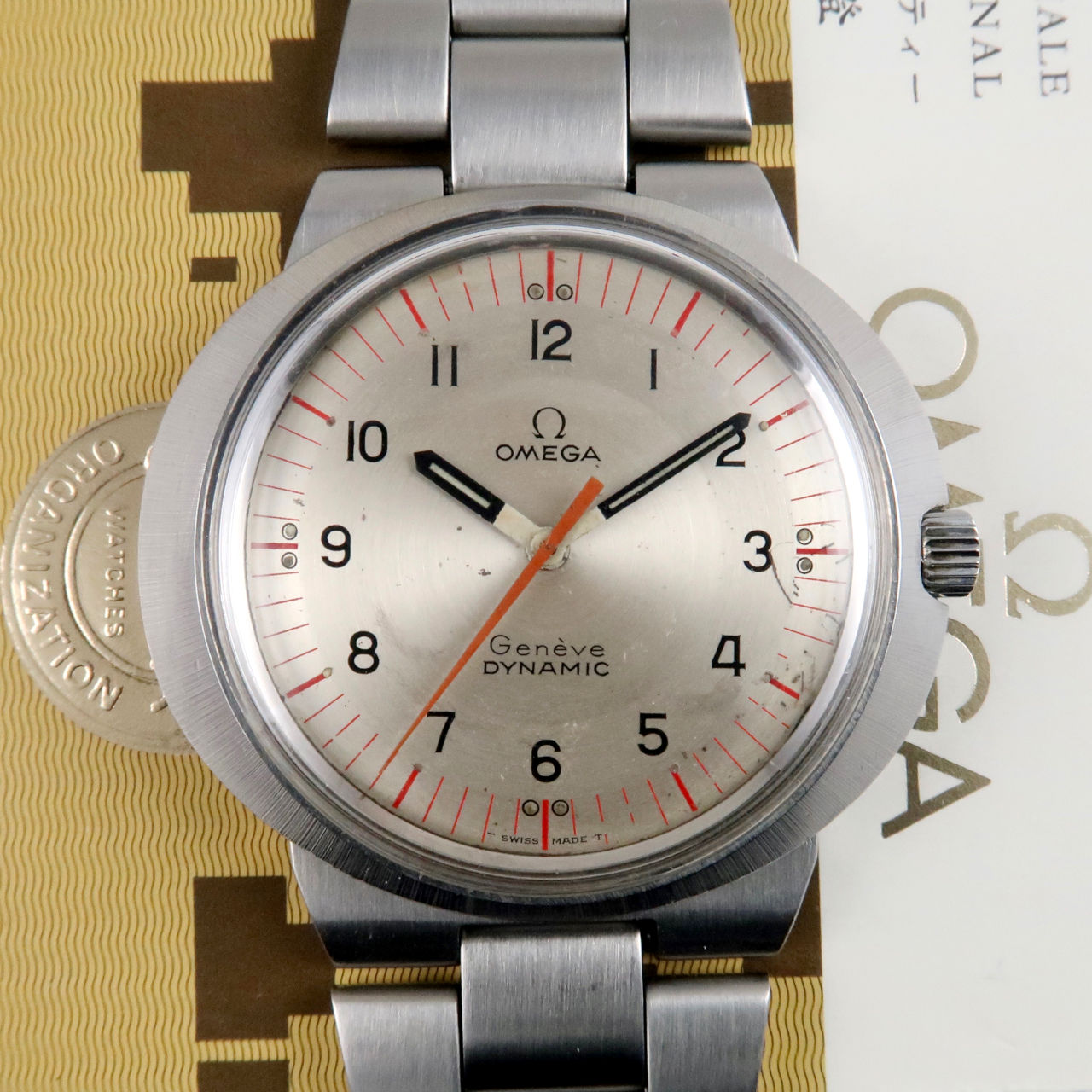 This example of the Omega Dynamic has a rarely seen dial design. The silvered dial has a three-tone finish with a circular satin finish throughout. The chapter ring, which bears the black Arabic numerals, is finished with a contrasting higher sheen to that of the central section which, itself, has a separate two-tone finish. At the outer edge of the dial, the track for minutes/seconds is calibrated in red and there are luminescent, twin dots at each quarter marker with single dots at the intervening hours. There is some scuffing and scratching to the dial and a small depression by 4 o’clock and 11 o’clock (these appear to be above the dial’s feet). The case and bracelet retain good definition overall with some light scuffs and scratches, slight stretch to the link closest to the watch head on both sides of the bracelet. This watch is accompanied by a red Omega folder containing the original Omega numbered guarantee and ‘You and Your Omega’ booklet. 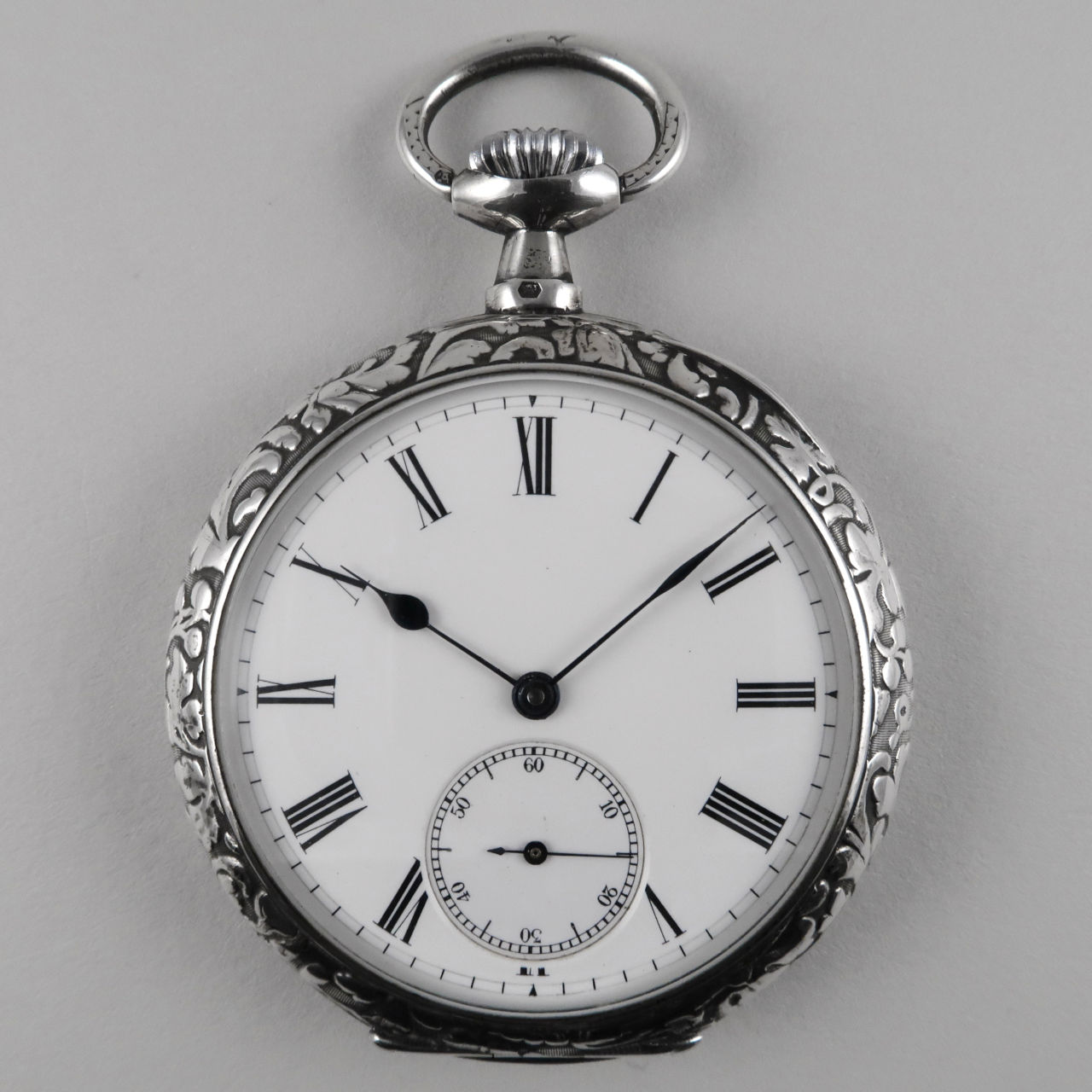 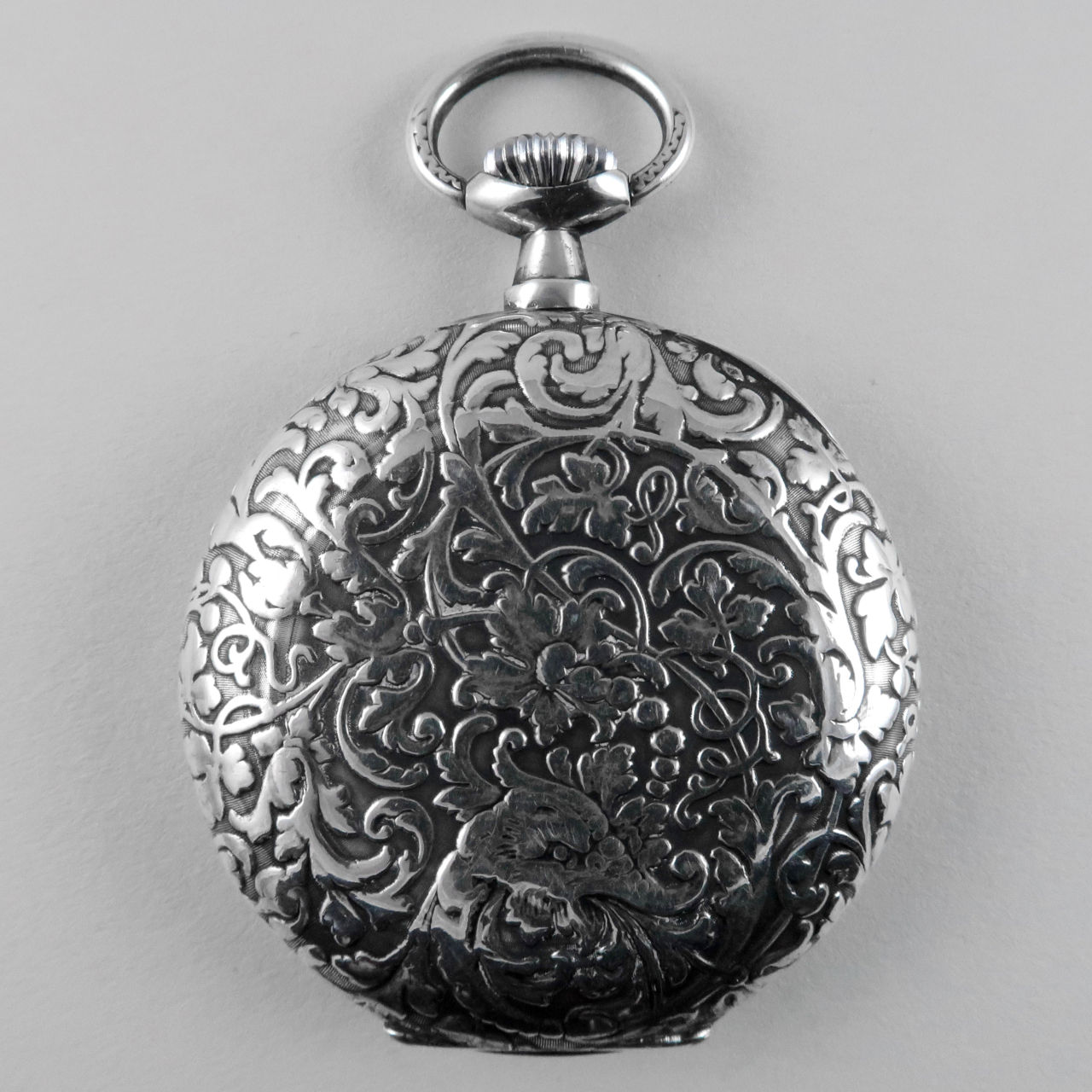 Although founded by Louis Brandt in 1848, the Omega name itself was not introduced until 1894. In that year, the Brandt firm (by then in the hands of the founder’s sons Louis-Paul and César) introduced a new 19”’ [ligne] movement that bore the name that would become the company’s brand – Omega. The movement was designed to have components that were easy to change meaning the watches could be easily serviced by any competent watchmaker, anywhere in the world. The calibre also used a new patented keyless winding and hand-setting system. Following the introduction of the Omega 19”’, the Brandts released further smaller calibres that were based on the 19”’ of 1894 and these included the 17”’ movement as found in the pocket watch illustrated here – the latter introduced in 1898. The case is highly decorative, the back and bezel are both chased and engraved throughout with flowers, foliage and a stylised dragon’s head. 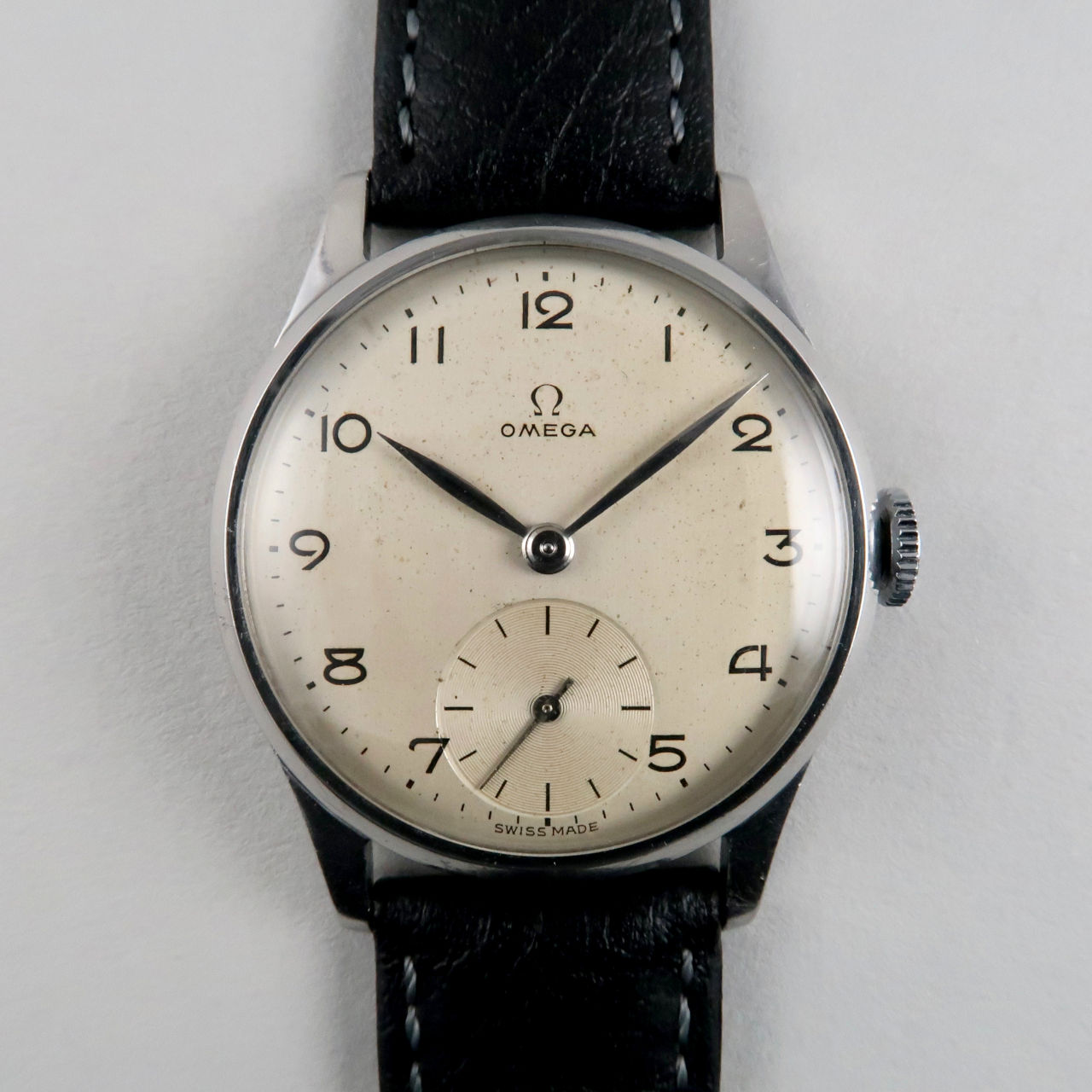 The dial of this Omega has unusual slim stylised Arabic numerals and a warm patina with light oxidation to the surface. Advertised in Omega’s catalogues for the UK market as a Ref. 720, the case was made for the watchmaker by the Dennison case company and is one of their most classic designs, featuring a polished chamfered bezel, gently down-turned lugs and flat, snap-on, back. Manually wound, the movement is a calibre 265 which is part of Omega’s highly regarded ’30’ series calibres. 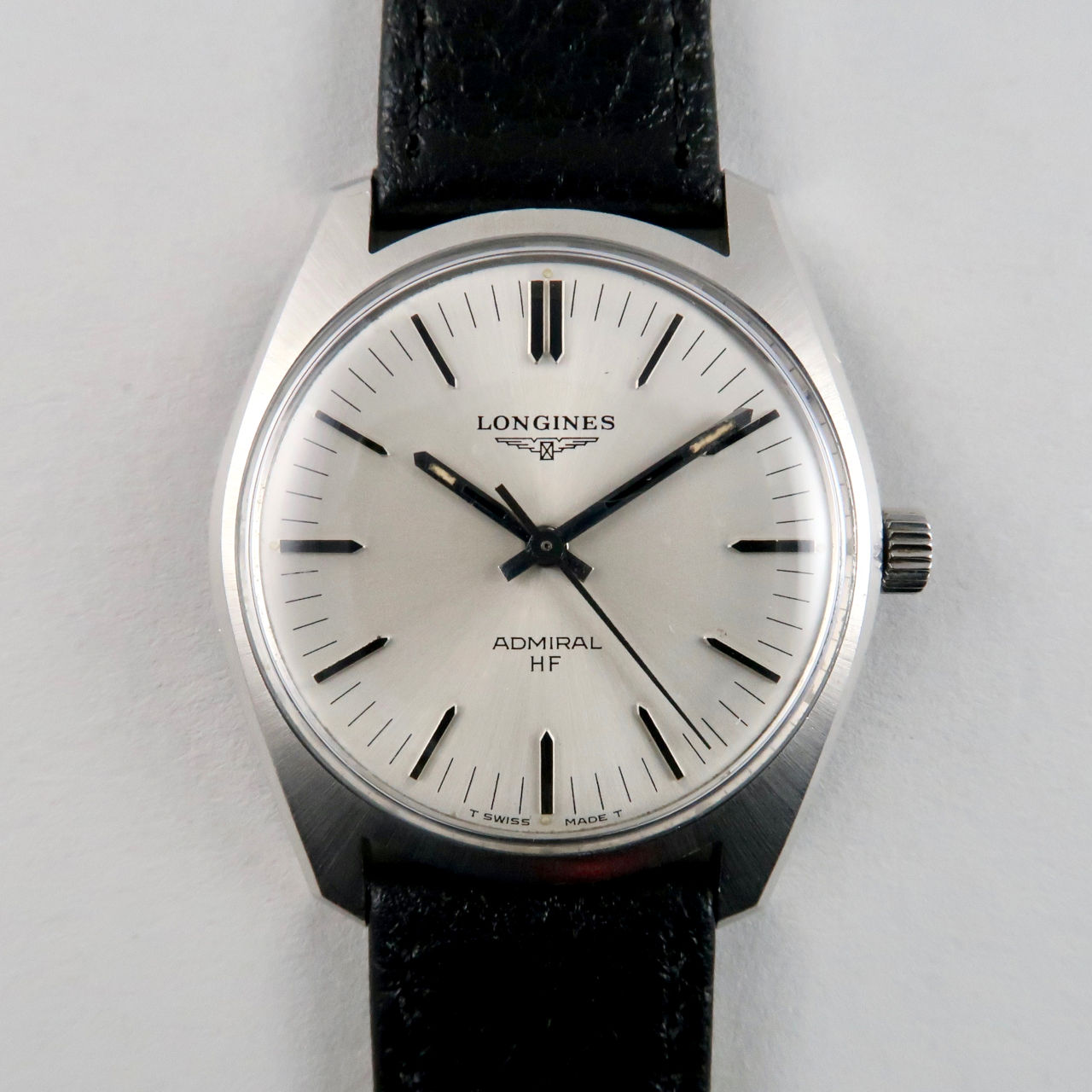 This watch incorporates Longines’ calibre 6942 which has an unusual hack feature – when the crown is pulled out to the hand setting position, the seconds hand will stop when it reaches the 12 o’clock position, the user can then push the crown back in upon a time signal or when synchronising to another timepiece and the seconds hand will re-start immediately. In good overall condition, the case is unpolished and retains crisp definition to its angles and edges, there are some light scuffs to the upper body and light scratches to the case back. 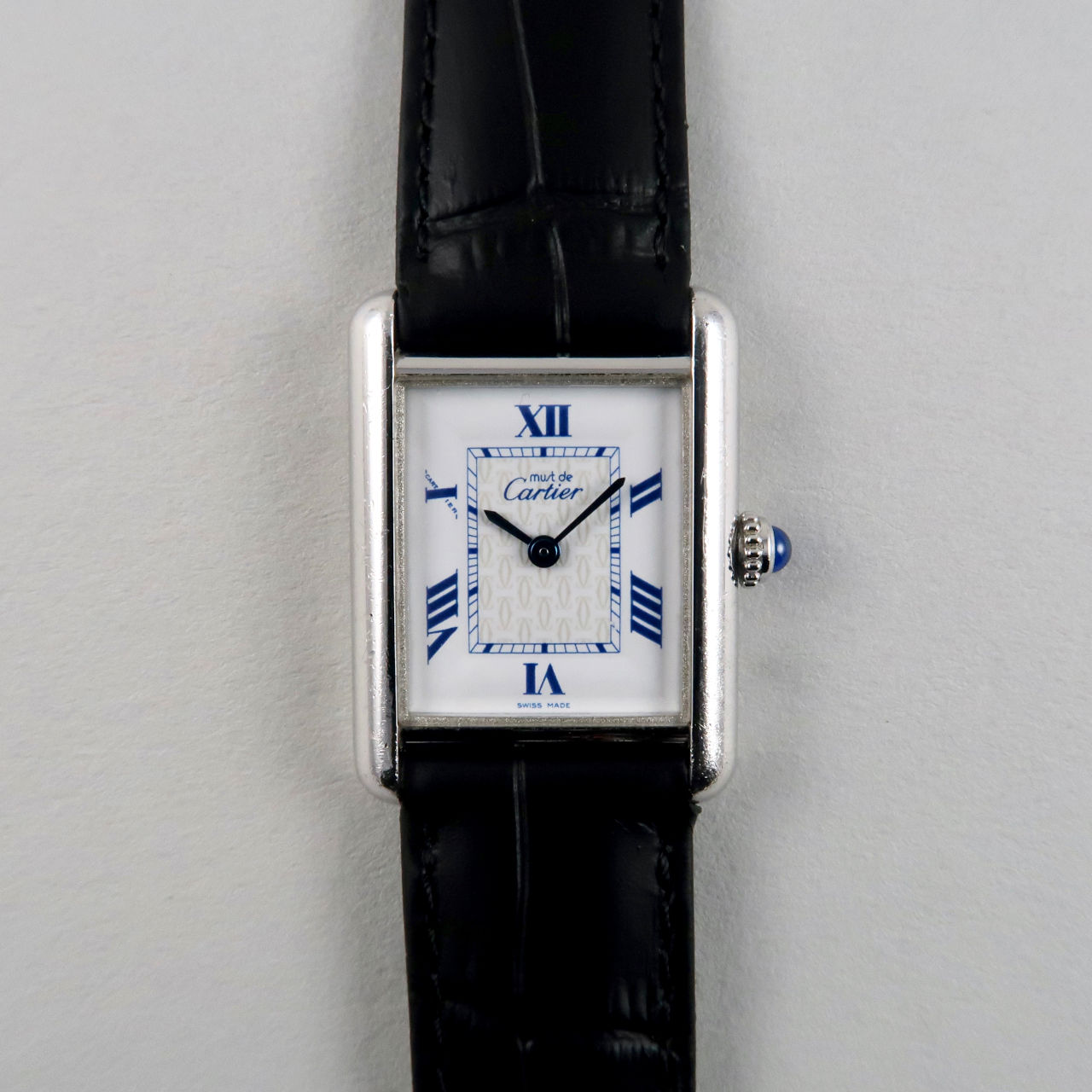 Made in the classic Tank design, this lady’s Cartier wristwatch dates to circa 2000 and has a white dial with blue Roman numerals and minute track. This is a battery powered, quartz wristwatch and is cased in sterling silver – there are small scratches and scuffs to the case. This watch retains its original steel Cartier deployant folding clasp. 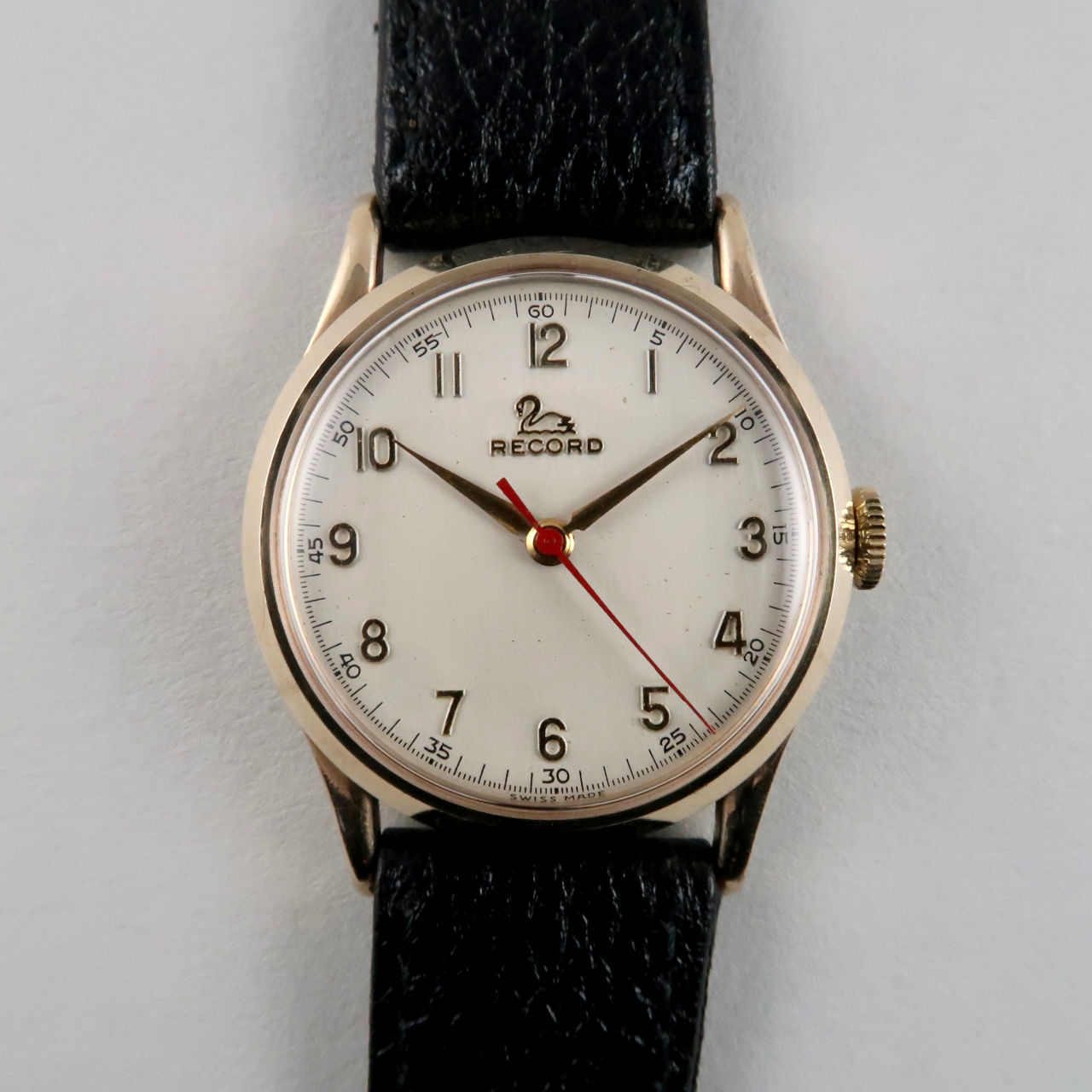 Vintage watches by Record are popular for their classic designs and good quality movements. Founded in Tramelan, Switzerland, in 1903, The Record Watch Company moved its headquarters to Geneva in 1924. In 1961 a majority interest in the Record Watch Company was purchased by Longines. In good original condition, the dial has an excellent lustre with some minor oxidation. The case retains very good definition and there are some light scuffs and scratches.

To automatically receive these updates via email, please select the “Join our Mailing List” button at the bottom of any of our web pages.