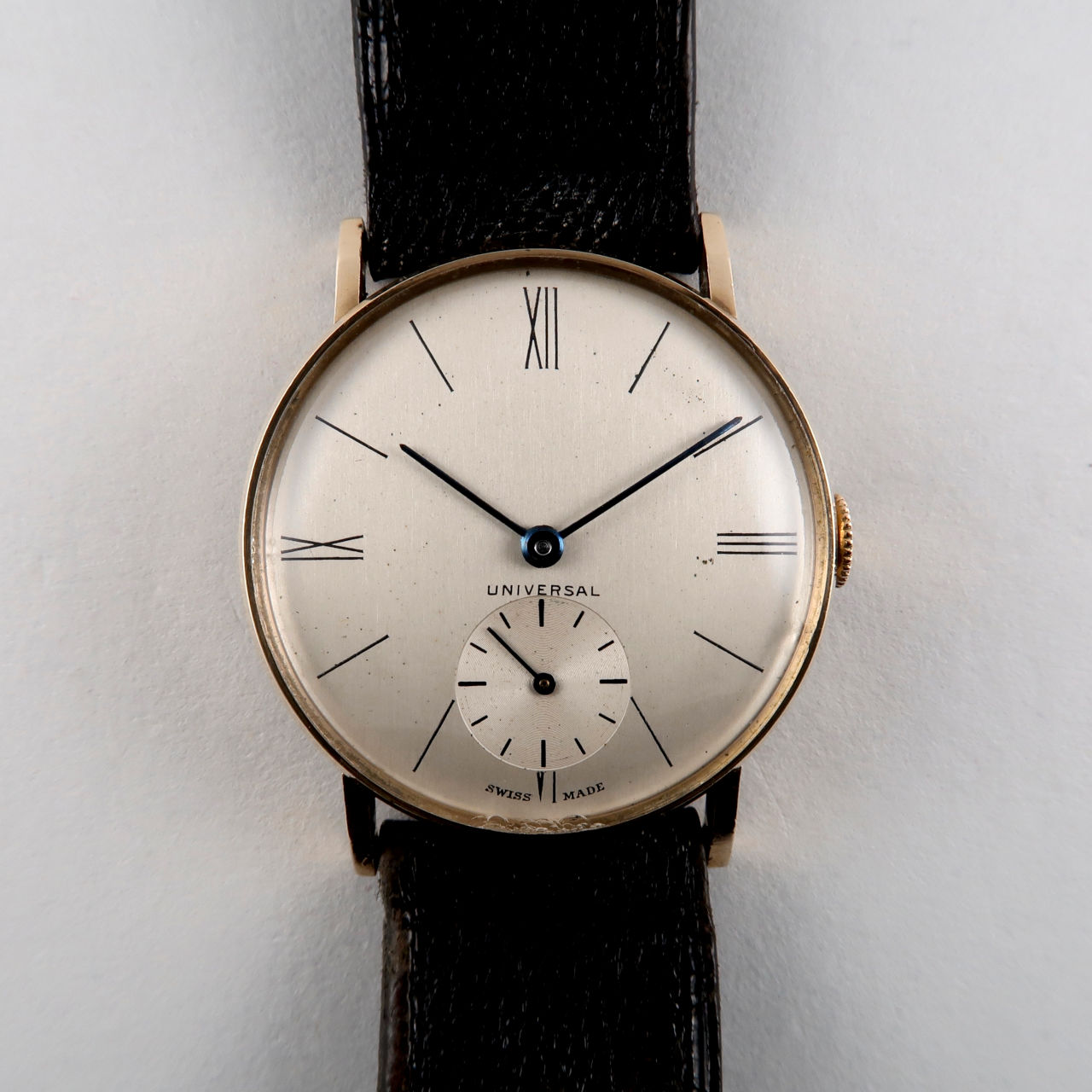 A wonderful late 1930s wristwatch this Universal is clearly influenced by the minimalist design ethos of the Bauhaus. The smooth contours of the circular gold case follow through to the clean lines of the bezel’s chamfer and the straight lugs with their sharp downward facets. Minimalist design continues across the dial which dispenses with minute divisions and indicates the hours via a combination of simple Roman numerals and baton indexes. Although mid-sized by today’s standards, the 31mm diameter case was a standard size for a gentleman’s watch of the period. The bezel is slim and, unusually, the crystal is flat which ensures that the dial is given maximum visibility – the edges not distorted by a curved glass. 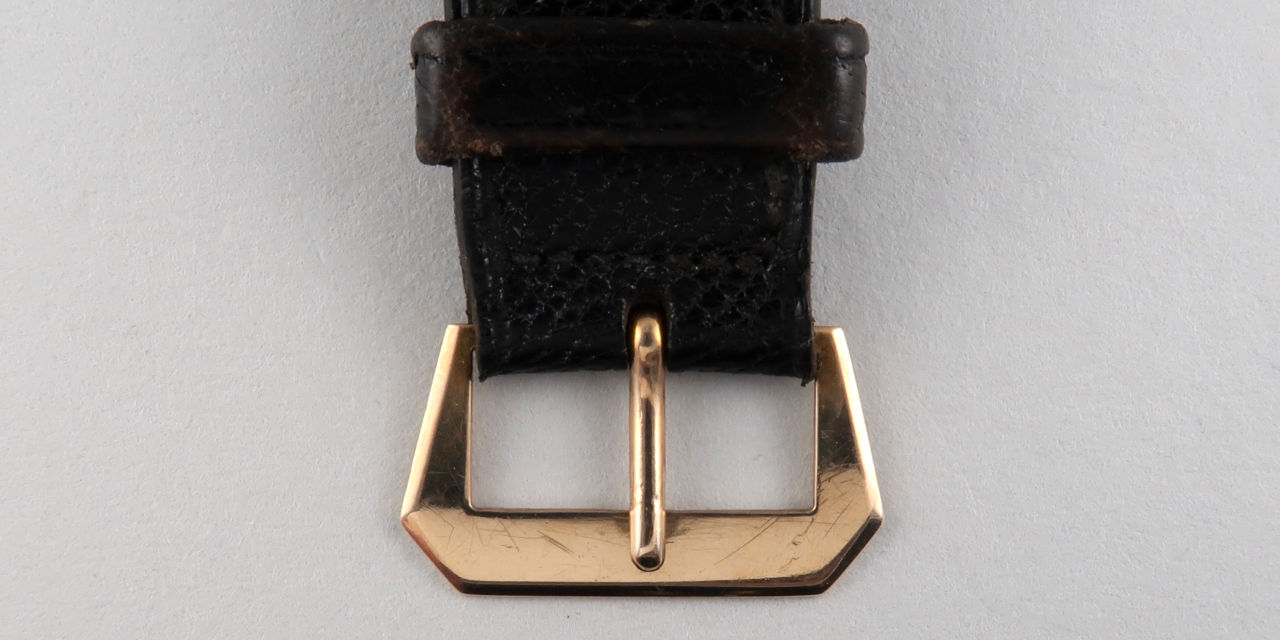 The leather strap is almost certainly the original and is fitted with an impressive broad gold buckle that is multi-faceted. Interestingly the Universal signature is printed just above the subsidiary seconds track – this was not an uncommon placement during the 1920s & 1930s when space in the traditional spot at the top of the dial was often left clear by the manufacturer to allow the retailer/jeweller to add their own name and in fact this is demonstrated by the Longines watch shown below. 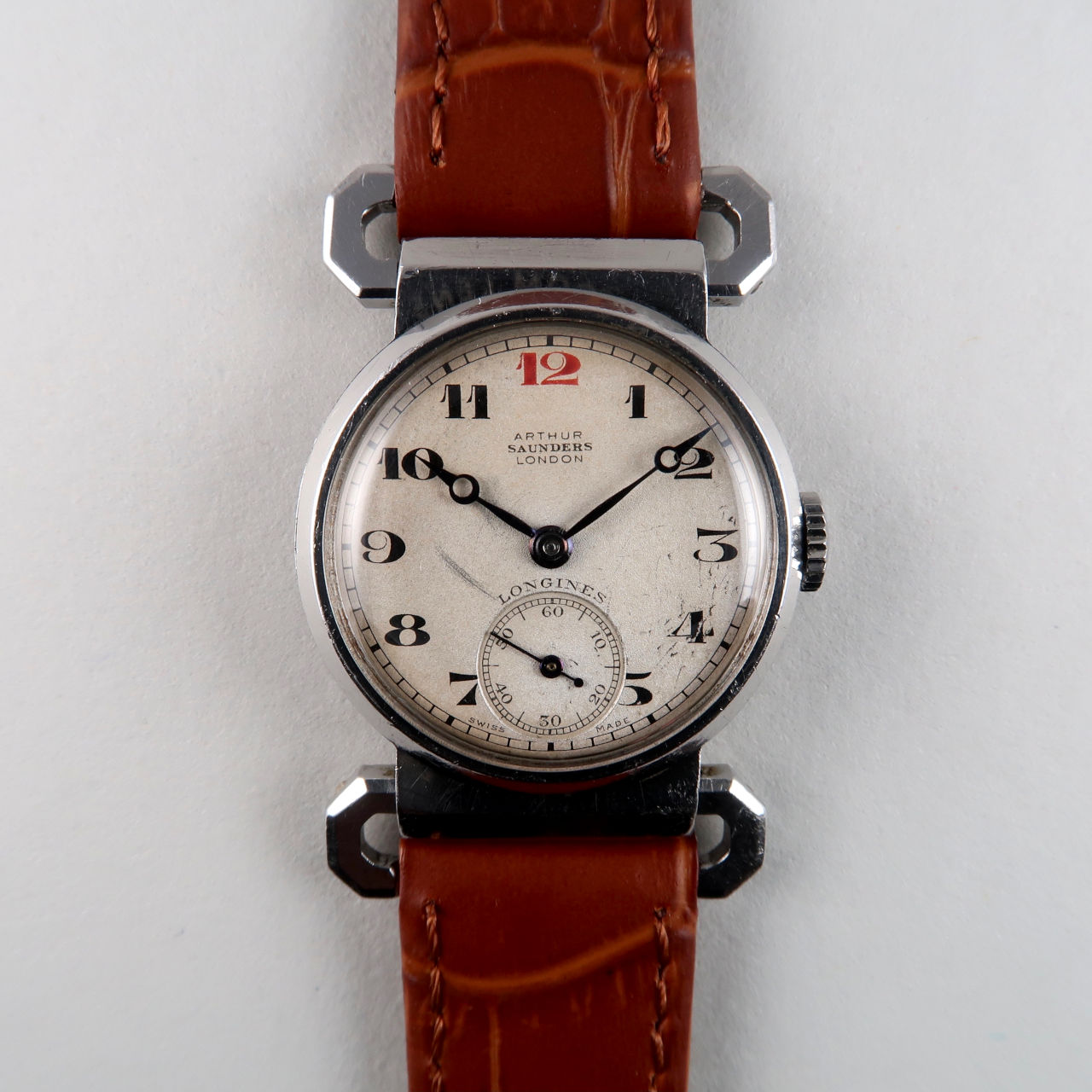 By coincidence this remarkable and rare Longines wristwatch was originally invoiced in 1938, the same year the Universal shown above was hallmarked. Although the design of the Longines’ dial continues to reflect the style of early wristwatches from the 1920s, the case is bold and modernist in its design with substantial hinged lugs which are multi-faceted. Although uncommon, articulated lugs were incorporated into a variety of models in the 1930s from plain time-only watches to chronographs. The Longines Archives confirm that this watch was originally invoiced by Longines to their UK agent, Baume, on 21 September 1938. Baume distributed Longines watches throughout the UK and the dial of this watch shows that this watch was supplied to the retailer Arthur Saunders, a firm based at 5 Southampton Row, London WC1. The watch’s case is in excellent condition with tight hinges to the lugs and sharp chamfers to the lugs; there are light scuffs and scratches from wear. There is light tarnishing to the dial, some small scratches between 3 and 4 o’clock and two more noticeable scuffs between 8 and 10 o’clock. 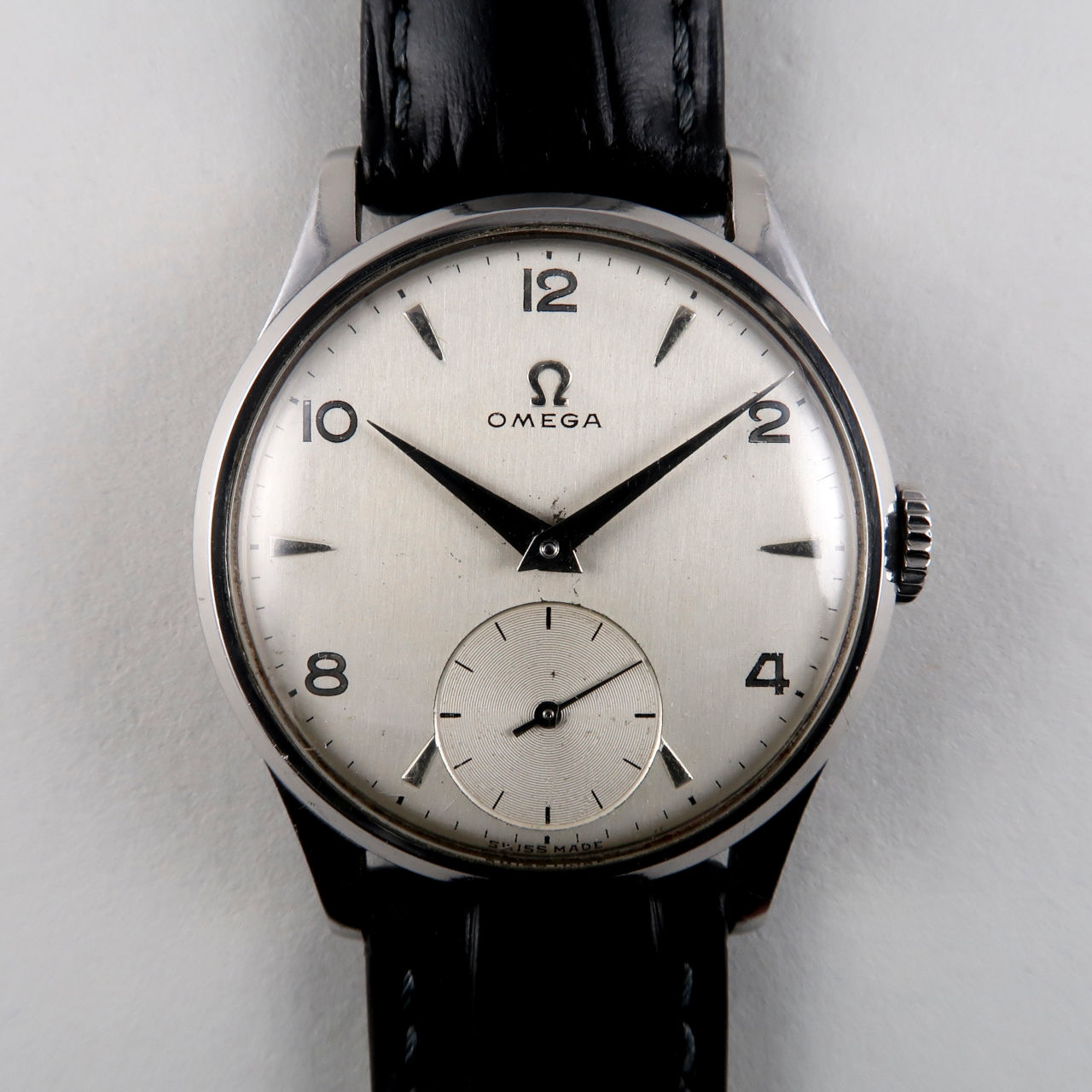 A classic vintage wristwatch, this model was advertised in Omega’s catalogues for the UK market as a Ref. 720. The case was made for the watchmaker by the Dennison case company and features a polished chamfered bezel, gently down-turned lugs and flat, snap-on, back. Manually wound, the movement is a calibre 265 which is part of Omega’s highly regarded ’30’ series calibres. The silvered dial has a combination of silver foil Arabic numerals and raised triangular hour indexes which provide depth and contrast as light carries across the surface. 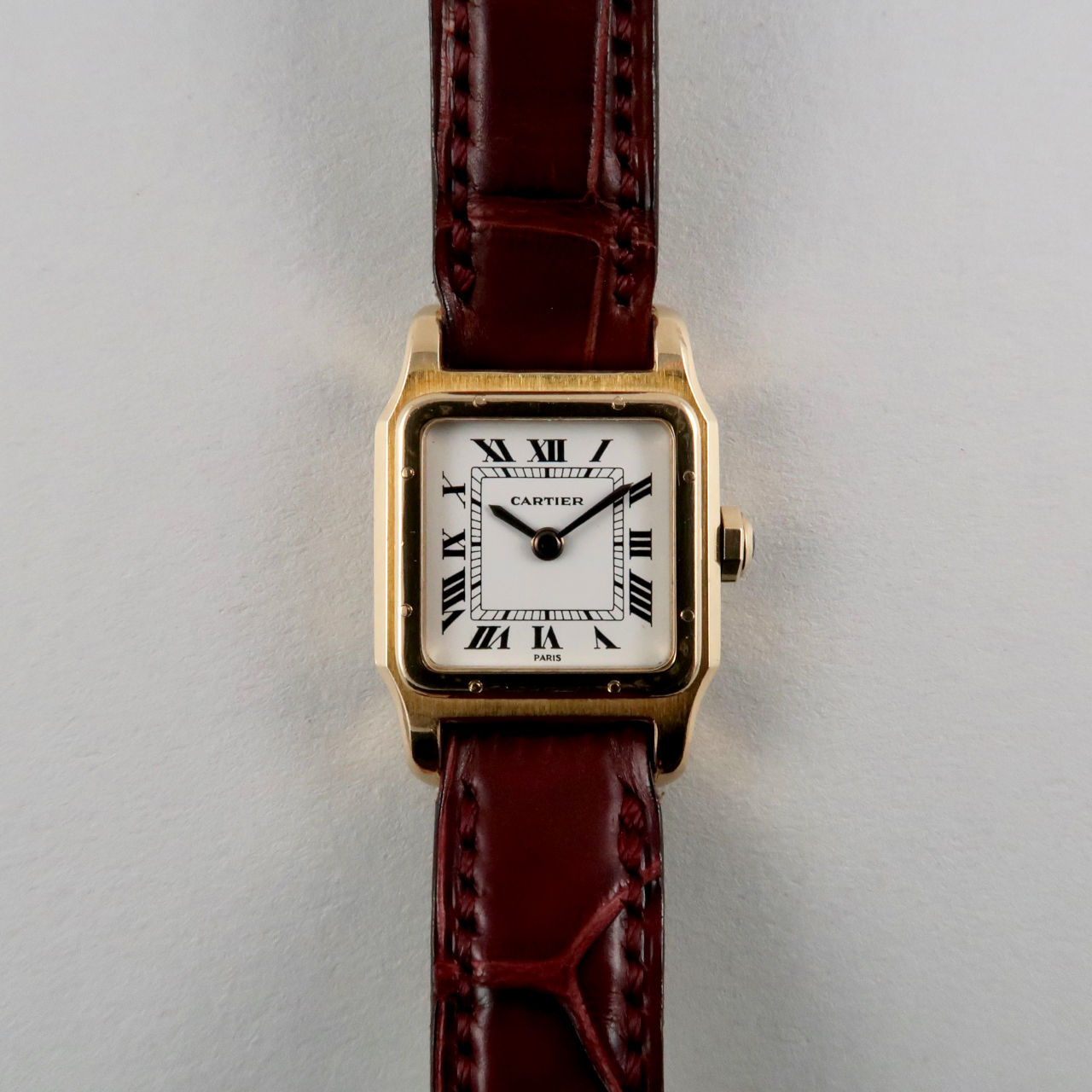 Santos is one of oldest vintage wristwatch models. Designed in 1904 by Louis Cartier for his friend, the Brazilian aviator, Alberto Santos Dumont, it is recognised as one of the most iconic of all wristwatch designs. Cased in 18ct yellow gold, this smart and stylish watch has a satin finished body with polished chamfers to the upper edges. The polished bezel is secured by 8 screws which are affixed from beneath, thereby giving the appearance of small pins to the front of the case. This watch is fitted with a maroon Cartier leather strap and gold Cartier deployant buckle. 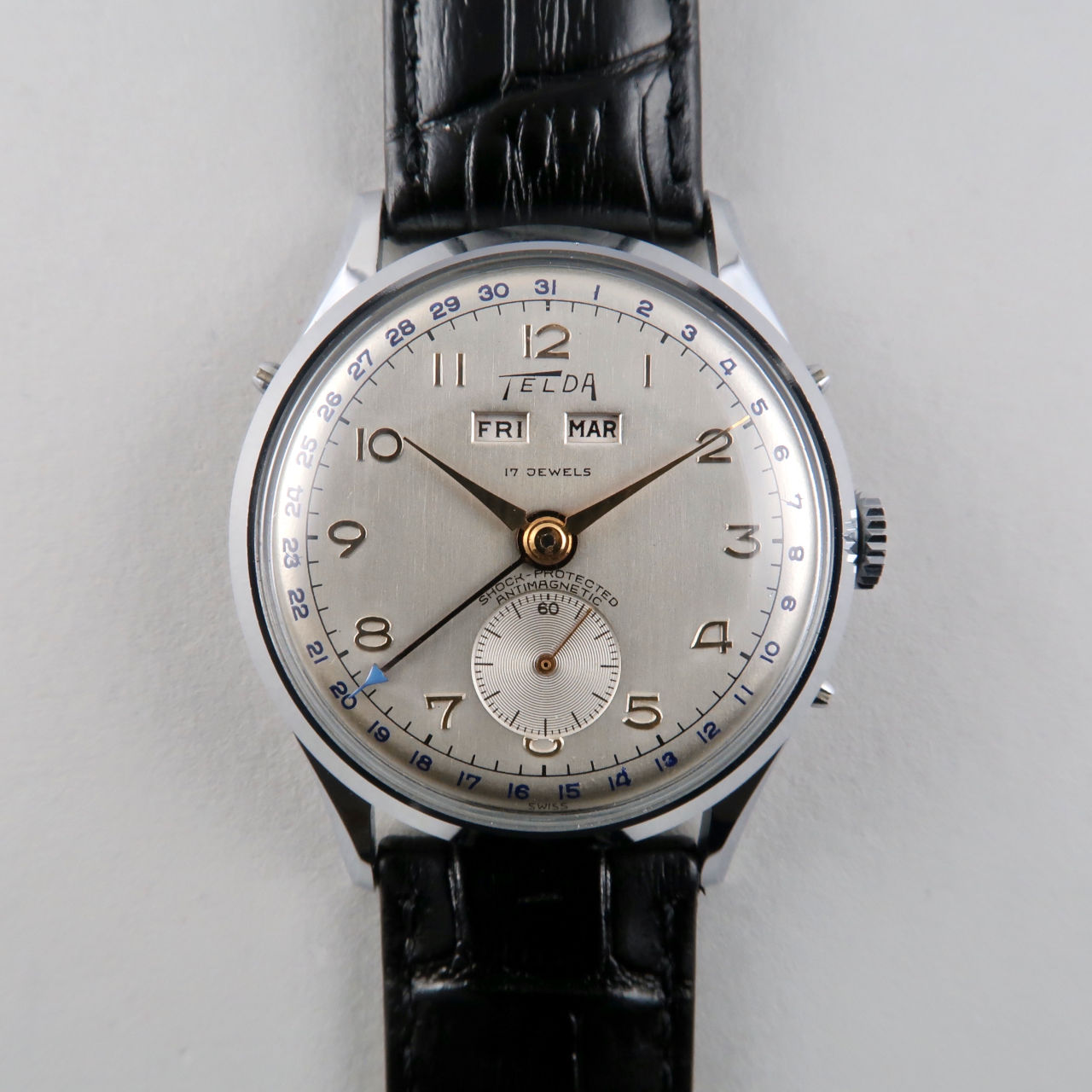 This triple calendar wristwatch is in almost unused condition with an excellent silvered dial and a super crisp, well defined case. The calendar displays days of the week and months of the year in the apertures below 12 o’clock, while the date is indicated via a blue-tipped central hand pointing to the outer date ring which is calibrated with blue numerals. The days of the weeks and date automatically advance at midnight and the months require manual advancement at the start of each month via the pusher to the case side at the 2 o’clock position. Two further pushers at 4 o’clock and 10 o’clock respectively allow the quick manual advancement, if required, of the date and day. 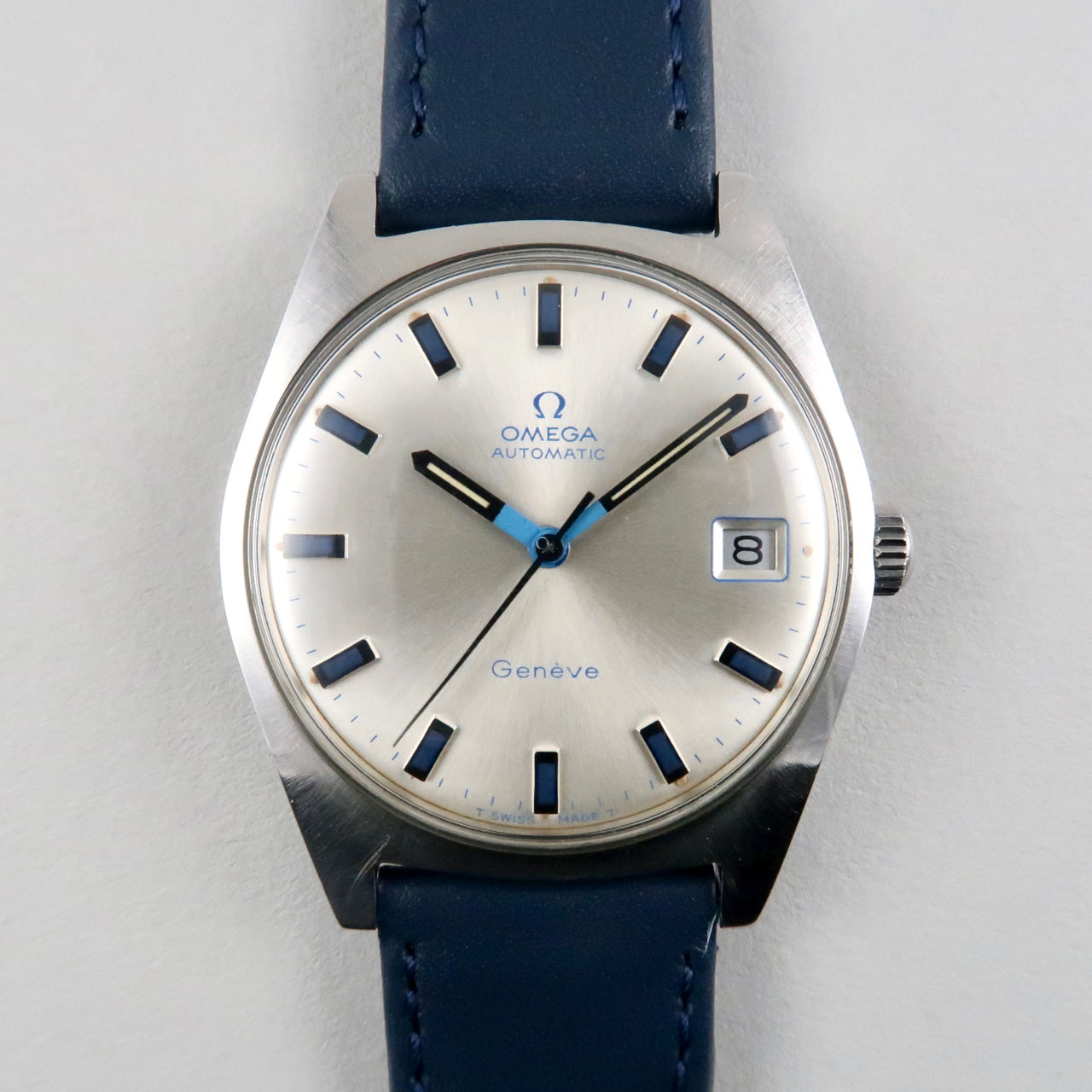 Omega produced the Ref. 166.041 with a range of different dial options, the present watch features one of the more unusual variations with broad raised indexes which have blackened surfaces with blue centres. The Omega signature and dial texts, together with the outer track for minutes/seconds and frame for the date aperture are all calibrated in blue – this is all in contrast to the standard 166.041 dials which feature black ink for the calibrations and dial texts. 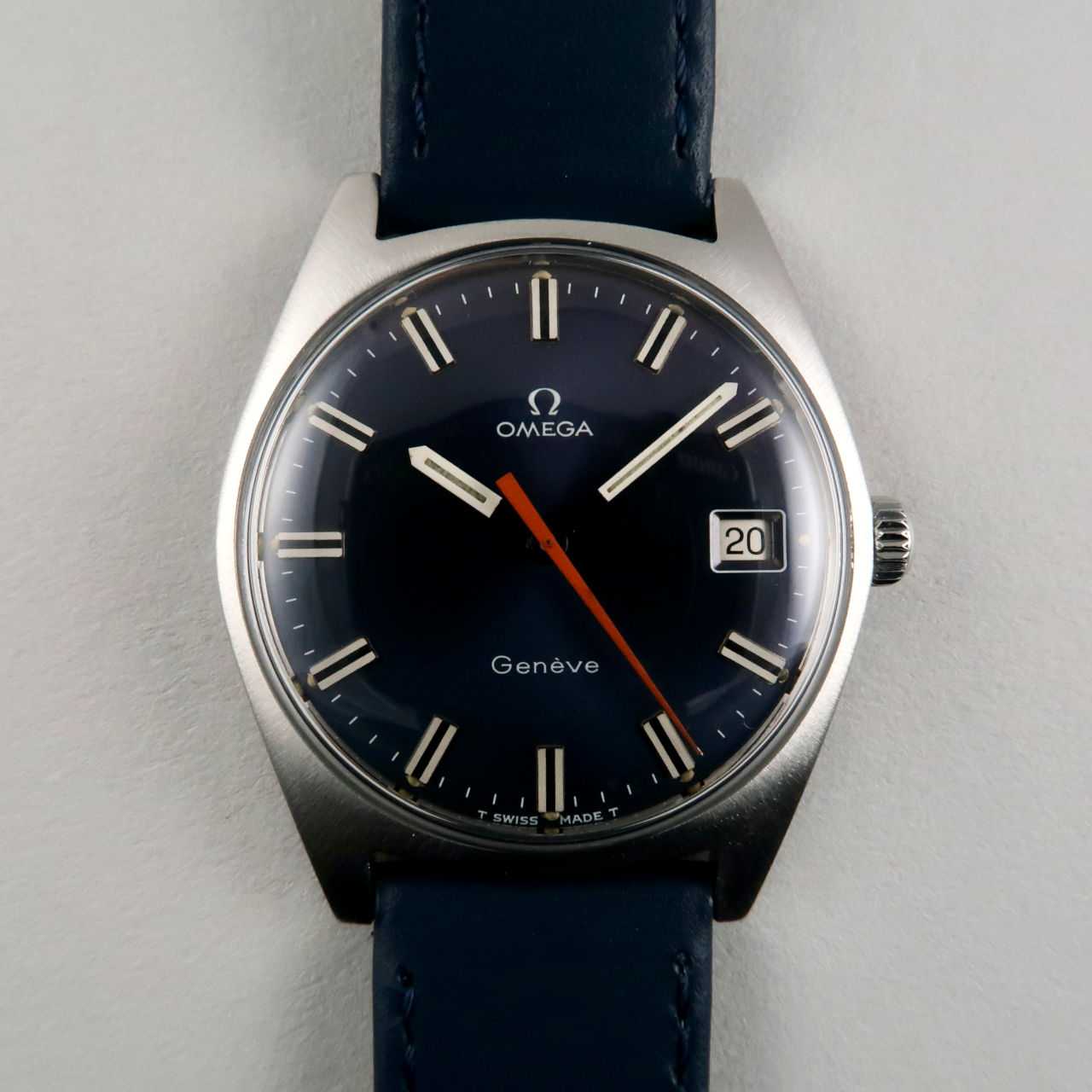 Omega first launched their model 136.041 in 1967 and the present example dates to 1969. Predominantly manufactured with a silvered dial, the present example features the more unusual, deep blue, satin finished dial. Also notable are the two-colour white and black hour/minute hands and contrasting orange centre seconds – the standard version of this model was fitted with plain, single tone polished metal hands. The stainless steel, tonneau form case has a satin finished bezel and screw-down case back. 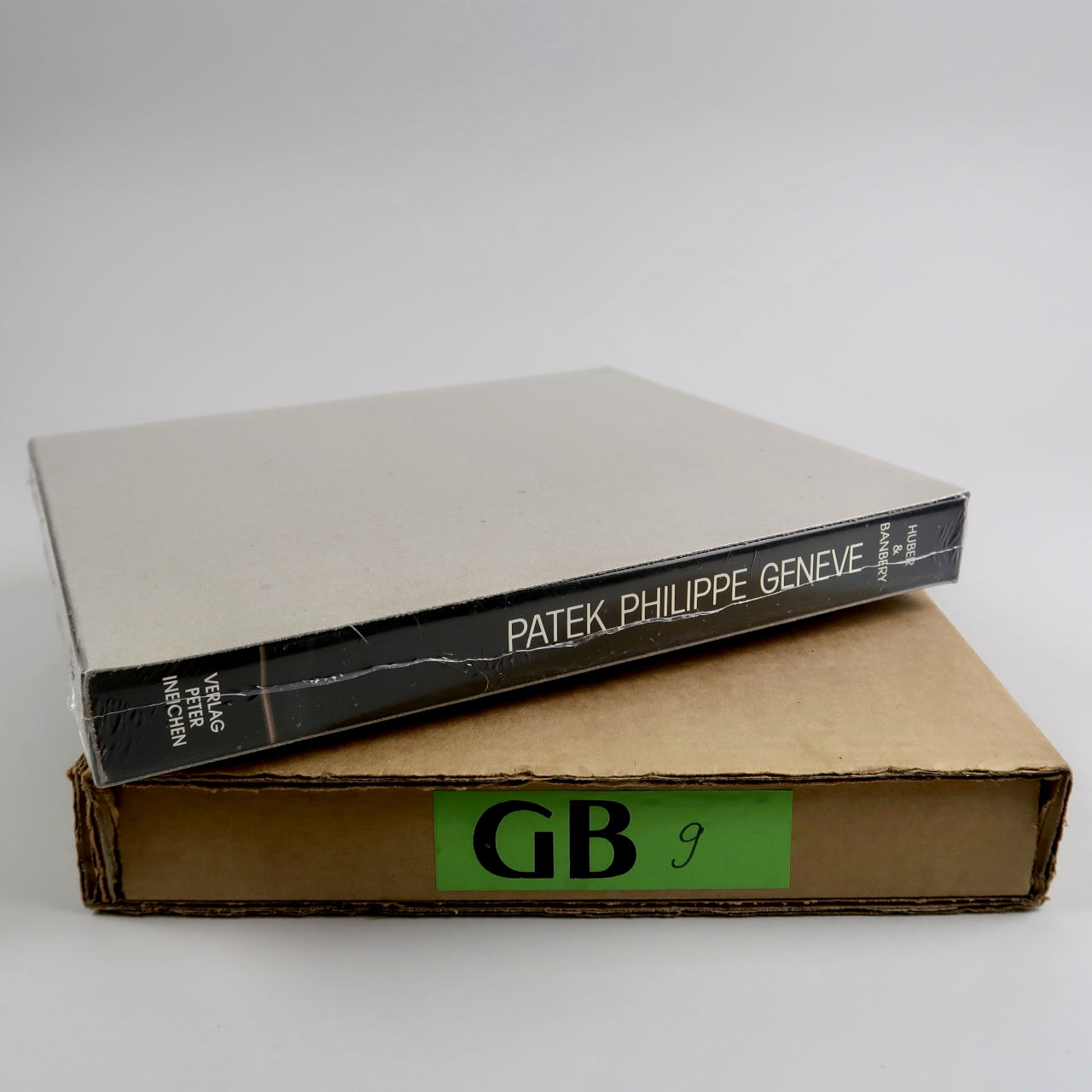 A new/old stock copy of the first edition English language version of this important book, published in 3000 copies in 1982. This copy is still in its original plastic seal which covers the card slip case, remarkably the book also retains its original numbered shipping carton. The shipping carton has a green GB sticker (presumably for Great Britain), this  label has a hand written ‘9’ – the same ‘9’ can also be found written to the card slip case beneath the plastic seal. This book was discovered in a book warehouse a few years ago together with other new/old stock watch books from the 1980s and 1990s.