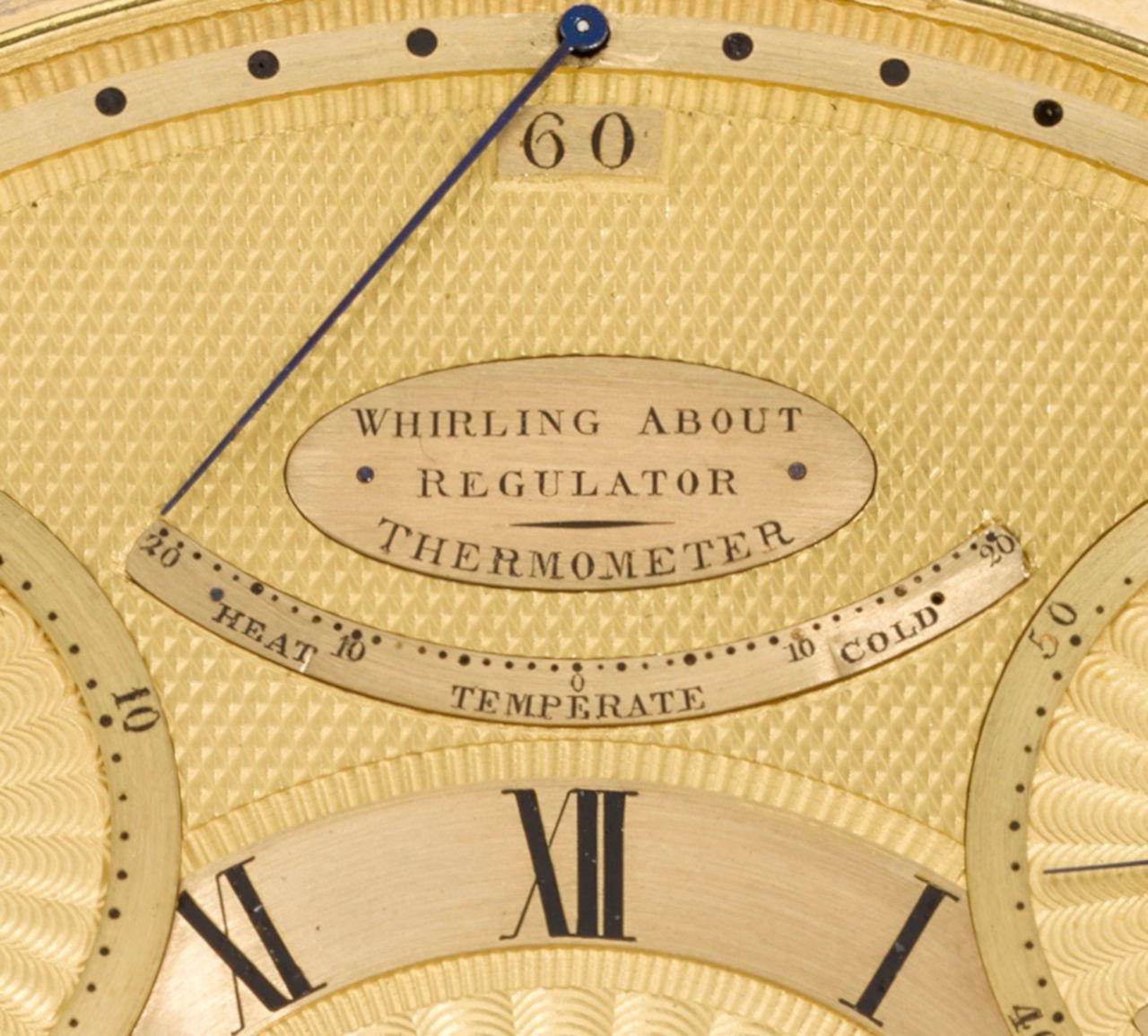 This extraordinary watch was sent to Breguet’s London agent, Recordon, on 29 June 1808 for delivery to King George III. At the time of the watch’s manufacture, the Napoleonic wars (1803-1815) were ongoing and it is therefore quite remarkable not only that the watch was ordered but that it was delivered at all. Under Napoleon’s ‘Continental System’ and his Berlin (1806) and Milan (1807) decrees, a naval blockade of the British had been declared and the French, their allies and occupied lands were forbidden to trade with the UK. For the King of Great Britain to purchase a French watch during this period would have seemed unthinkable. Yet George III had a passion for horology and clearly the opportunity to own a piece of cutting-edge watch technology was too tempting to miss. Avoiding a direct connection between the King and a French product was important and whilst the watch can be clearly seen to be signed by Recordon, the only place that Breguet’s name may be viewed is in small lettering on the tourbillon carriage. One can only wonder at the interesting, covert journey the watch must have made from Paris to London

The dial is charmingly labelled ‘Whirling About Regulator’ – a literal translation of the French word ‘Tourbillon’. Although not the first Tourbillon ever made, it is possibly the first to have been sold. Of the two that are understood to have been made before this watch, the first wasn’t actually sold until 1832 and the second was made as a present for the English watchmaker John Arnold’s son (John Roger), and that latter watch wasn’t presented to Arnold junior until 30 April 1809, several months after the present watch was delivered. This is the only four-minute Tourbillon known by Breguet with a thermometer and the only one with a Robin escapement. The dial is marked in English and there are subsidiary dials for ‘common’ i.e. constant seconds and ‘observation seconds’ which can be used for timing seconds (using its own stop/start slide). There’s also a sector for power reserve indication.

I first met this watch in 1999 when I was working full time at Sotheby’s and I was privileged to be asked recently to research and write the cataloguing in preparation for its reappearance at Sotheby’s in London on 14 July 2020. The condition is outstanding – the case decoration is unbelievably sharp and the provenance is incredible. There’s no question that this is one of the most important Breguet watches ever made. Full details on sothebys.com